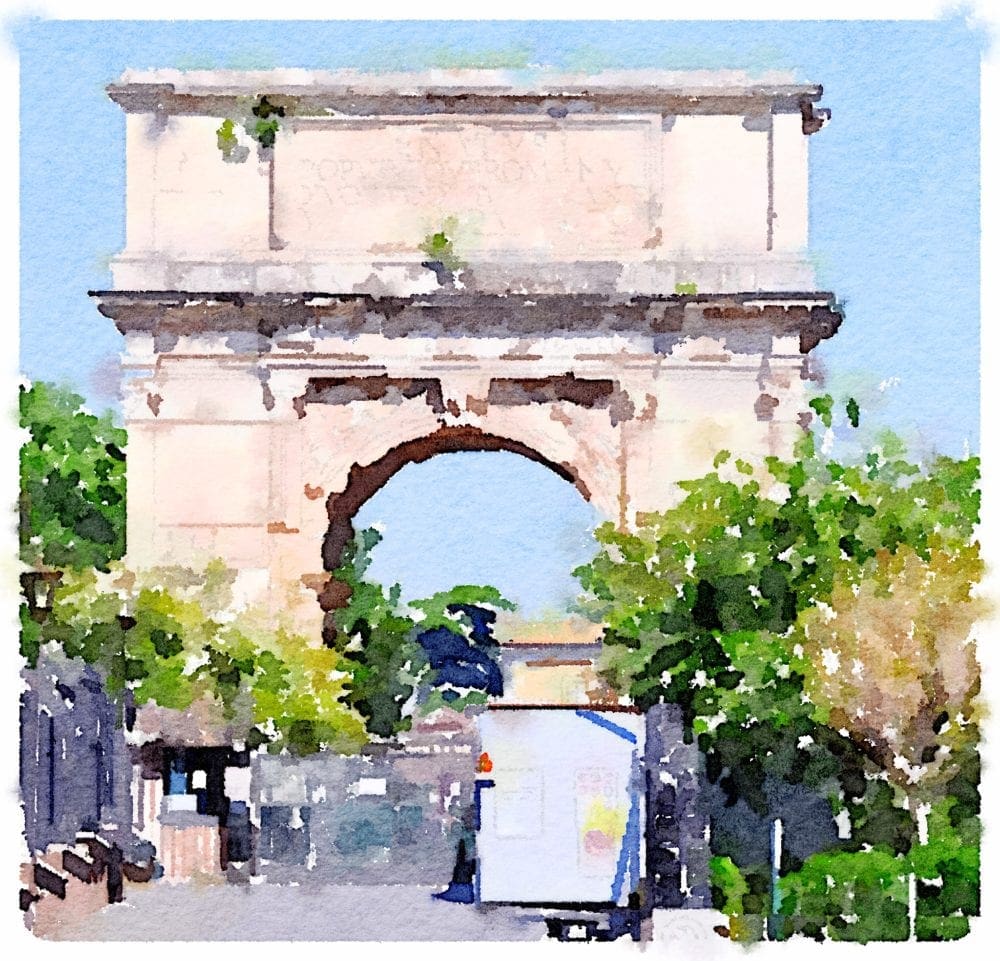 Italy - Rome - the Cradle of Western Christian Culture and Civilisation

Rome (and the Vatican) and Sorrento

A long time ago, Susanna and I made a visit to Rome. Rome was satisfying, Though we enjoyed walking more than our bus tour. The Vatican City was crowded and the Sistine Chapel in the Apostolic Palace, the official residence of the pope, worth queuing for. Then we went to Sorrento. 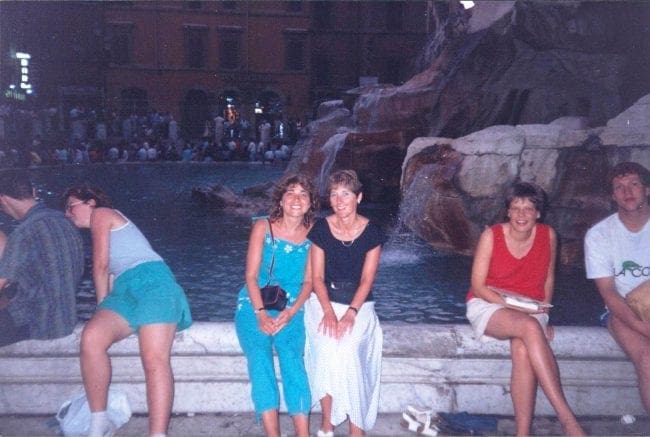 Years later, I'm back in Rome again. Early June is a good time to visit. It’s warm, but not so hot that walking is an effort. The Colosseum, the Forum and the numerous cupolas are admirably framed against a clear blue sky. There are already too many people though and the queues into St Peter’s Basilica are not encouraging. The main road down to the Forum is thronging. A Funny Thing Happened to Me On the Way to the Forum… well a gladiator demanded to have his picture taken with me. And then demanded money with menaces afterwards. 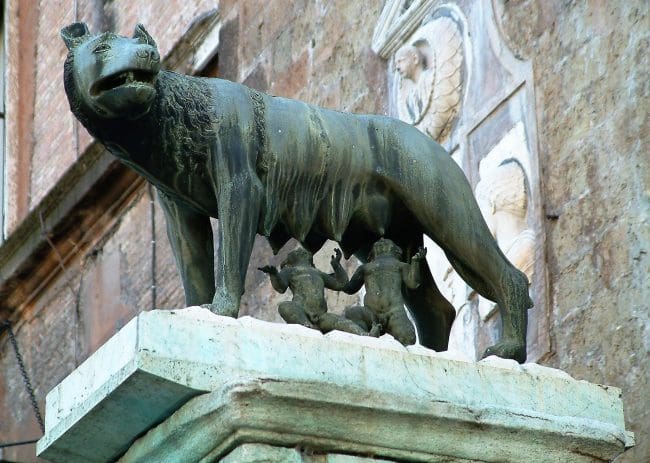 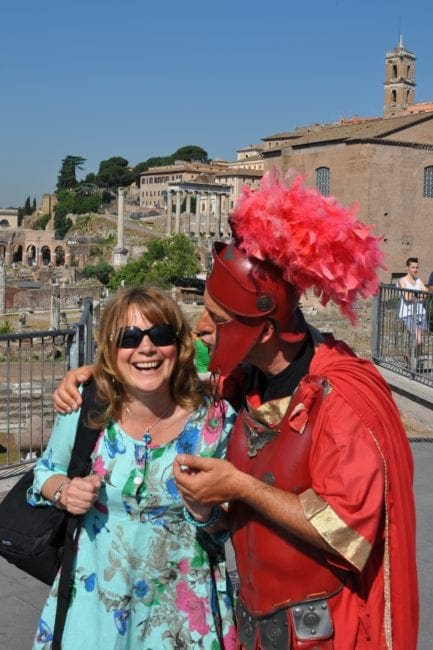 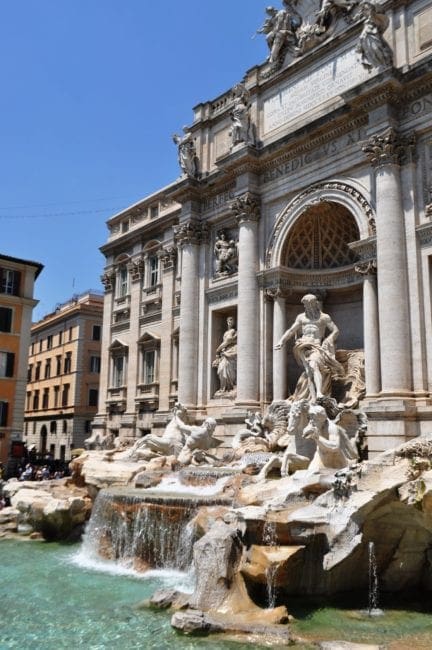 Rome is the capital city of Italy, built along the shores of the Tiber River. Myth has it that the city was founded by twins Romulus and Remus, who were suckled by a she-wolf. (There are sculptures of the wolf.) Vatican City. the smallest country in the world, is an independent country inside the city boundaries of Rome - the only country within a city. The archaeological evidence of human occupation of the area of modern-day Rome dates from about 14,000 years ago

Rome is known as the City of Seven Hills (for obvious reasons), due to its geographic location, the Eternal City (as dubbed by Tibullus, then Ovid, Virgil and Livy), Caput Mundi (Capital of the World). Rome is generally considered to be the 'cradle of Western Christian culture and civilization' and the centre of the Catholic Church. It's an important city. and as we know, 'All Roads lead to Rome'. 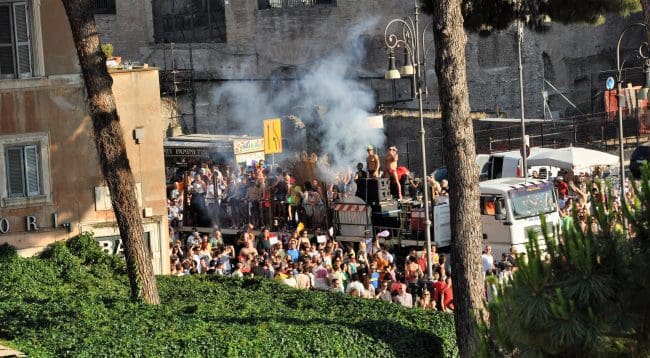 And there's always plenty going on. There’s a Gay Pride march this weekend and the city is having with visitors who have come to participate. There’s a motor bike parade early on Saturday and another one on Sunday with floats. I think it’s all part of the same event. Maybe not, as the bikers are all hoisting national flags. The Sunday parade features glitter hurling and a lot of men with great bodies, in teeny tiny swimming trunks.

You can explore this bustling (possibly chaotic?) city by bike, hop on- hop off bus, Segway or even on a Vespa scooter tour, But central Rome is just about walkable. And it is completely free.

How to describe this world renowned city with so many awe inspiring sights, the centre of an incredible wide flung empire? Impossible to capture it all. I've read so much and seen so many movies. Julius Caesar of course is fascinating. Then there's Anthony and Cleopatra, I Claudius, Gladiator, Ben Hur and Spartacus. That's just a few. My hotel is in the Colosseo district in the heart of ancient Rome, where the Colosseum (the name of the area is a bit of a clue), the Palatine Hill, and the Roman Forum are located. Just to the south, the Circus Maximus (think Charlton Heston and chariot races). 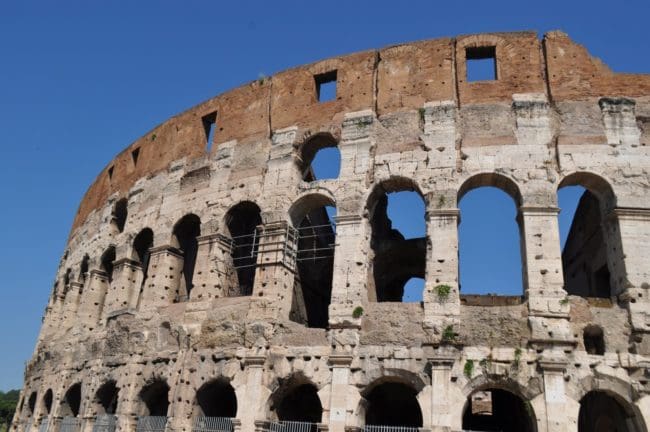 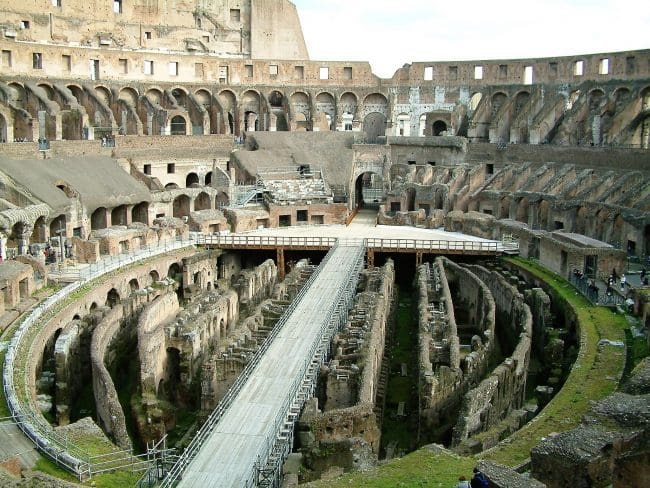 The Colosseum is perhaps the most well known tourist attraction. It's an amphitheatre, the largest in the ancient world, holding between 50 and 80,000, depending on which expert you believe. The Roman entertainment centre was most famously used for Gladiator fights, where individual cites would flaunt their wealth by staging shows: gladiatorial combat, as well as a variety of other events, such as animal hunts. It's reported that rhinoceros, hippopotami, elephants, giraffes, aurochs, wisents, Barbary lions, panthers, leopards, bears, Caspian tigers, crocodiles and ostriches all featured. You can't visit without recalling Kirk Douglas or Russell Crowe, togged up and ready for the fight.

Separating the Colosseum and the Palatine Hill is the Triumphal Arch of Constantine, commemorating Constantine's victory over Maxentius at the Battle of Milvian Bridge in AD 312. The arch spans the Via Triumphalis. This is the route taken by military leaders when their victories were honoured and they entered the city in a procession. (You must have seen these in many films). As is so often the case, much of the sculptural decoration consists of reliefs and statues pilfered from earlier monuments. 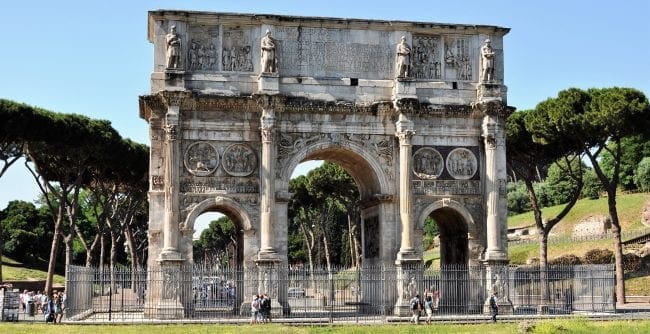 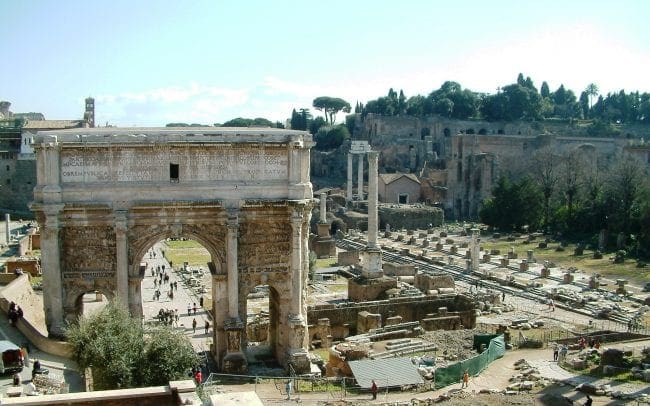 The Palatine Hill (one of the Seven Hills of Rome) is a bit of a scramble in the heat. It's where the rich and famous, starting with Augustus, built their palaces. So, it's sprinkled with ancient ruins, and the views alone are worth the climb. Running below, in the valley between the Palatine and Capitoline Hills, is the Roman Forum. This was the hub of the city, the heart of the Empire, the home of the market, meeting places (the most celebrated in the world?) and the Senate. It's a sprawl of ruined shrines, palaces, monuments and statues. Wow.

Some of the emperors moved the forum around the city a little, establishing new power bases, before it was returned to its original home. Caesar's forum is to the west and then a little to the north, the huge red forum of Trajan's. Adjacent, the Basilica Ulpia, an ancient civic building and Trajan's Column. 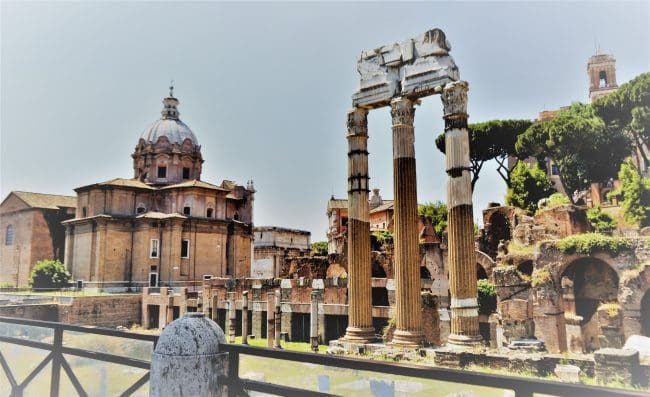 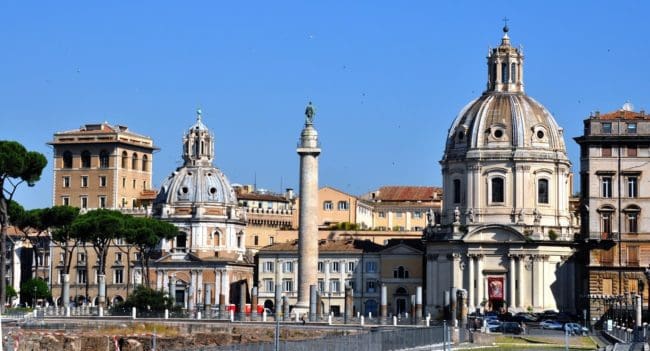 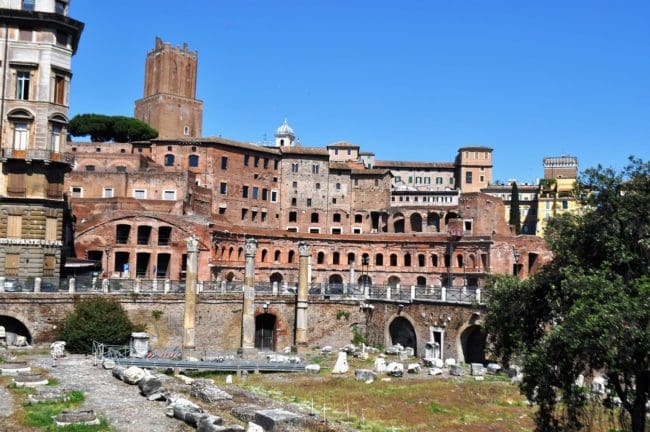 From the Fora, to the less antiquated, but equally beautiful, baroque and medieval areas in the Centro Storico (Historic Centre)- the Trevi Fountain, the Pantheon, the Jewish Ghetto, and some of the city’s most gorgeous squares – most notably the incomparable Piazza Navona.

The Pantheon, one of the giants of Rome, is a little complicated. It was a temple built by Marcus Agrippa, but it burned down. It was then rebuilt by Hadrian, who for some reason kept Agrippa's inscription. In 609AD it was turned into a church. The Piazza Venezia is yet another city hub, home to numerous monuments. The Piazza Navona was built on top of the stadium of Domitian and maintains the same shape. As well as all the wonderful baroque buildings there are three fountains. The central edifice is the Fountain of Four Rivers by Bernini, topped by the original Domitian obelisk 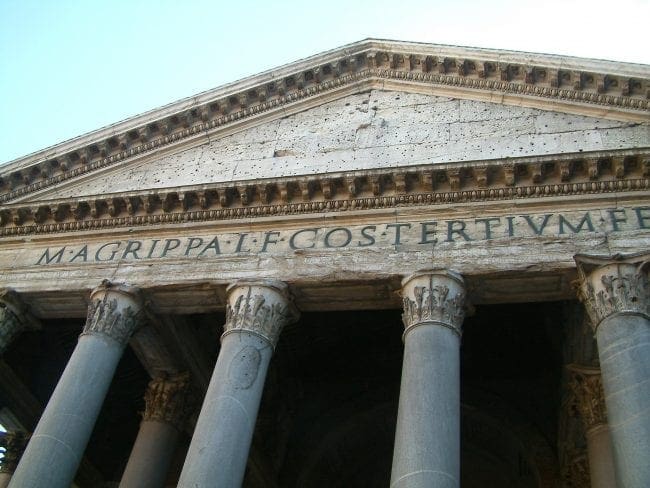 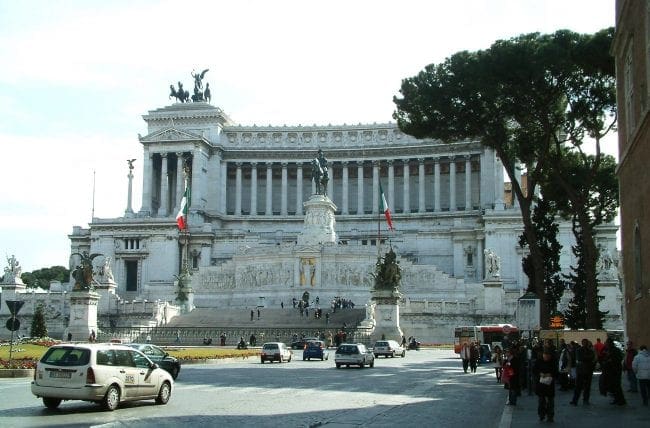 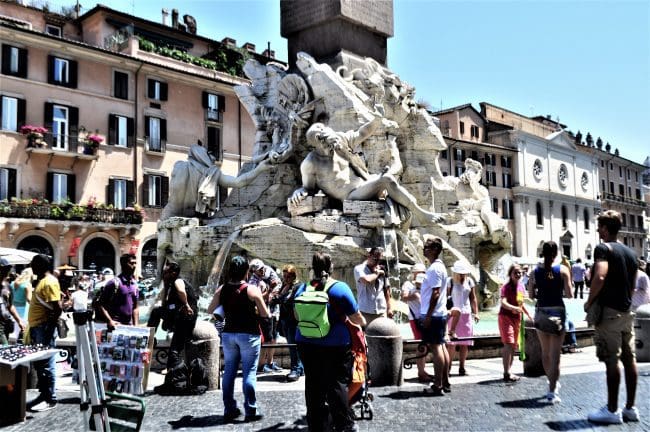 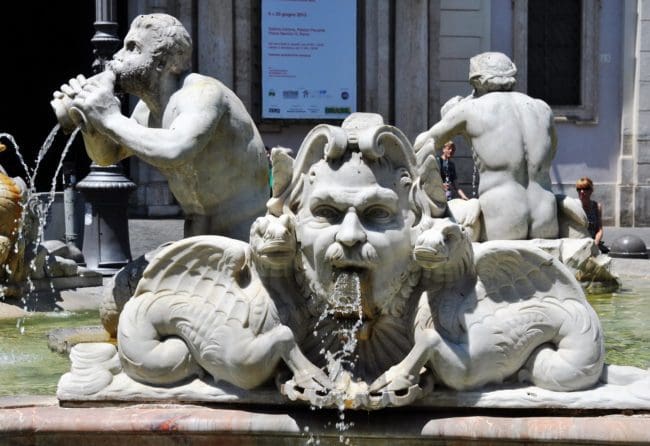 From Rome’s centre north to the area called Tridente, window shopping on Via del Corso and the Via Condotti, which leads to the famous Spanish Steps (Piazza Spagnia somehow doesn't sound quite so exotic). It's always busy here and the police have a good time trying to keep tourists out of Bernini's cooling boat shaped fountain at the bottom.

At the top of the the 135 steps, the French monastery church Trinita dei Monti. There are three different terraces, referring to the Holy Trinity (the Trinità), on the way up. The reward is an Egyptian obelisk and a great view across the centre. (If you can see through the crowds). Officially, the steps are named after the church, Scalinata della Trinità dei Montian. The unofficial name refers to the original siting of the Spanish embassy on the square at the bottom. The Villa Borghese gardens are just beyond. This group of holiday villas (there was even one for the Pope) are now home to assorted galleries and museums. 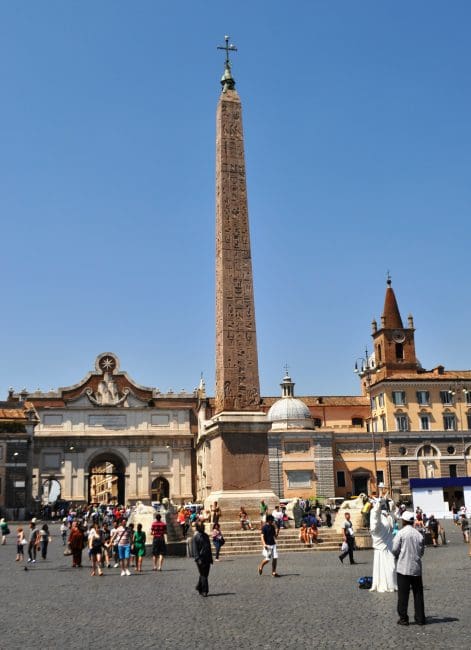 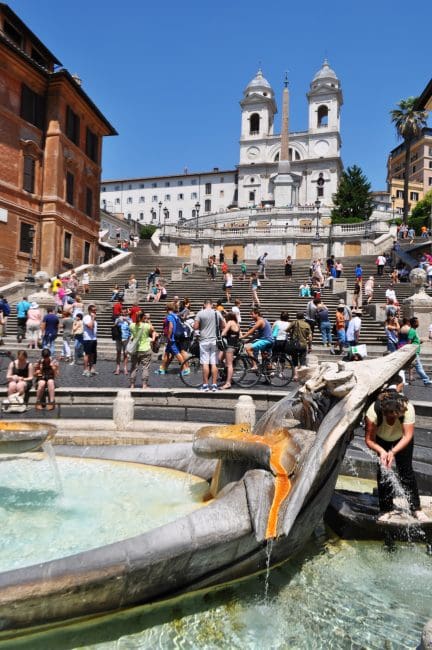 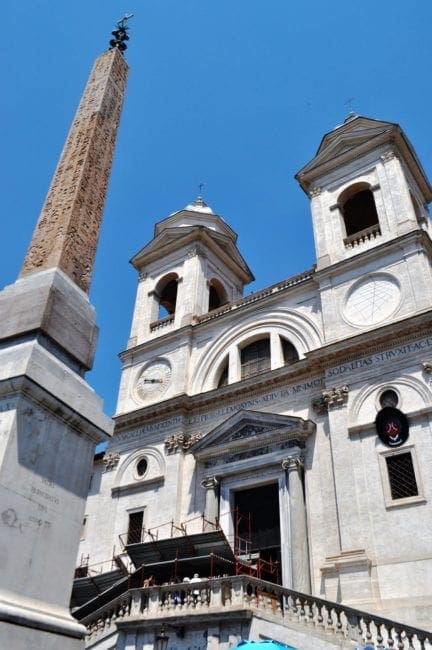 The Vatican and Trastevere

Finally, over the River Tiber bridges to towering Castello Sant'Angelo and the Vatican City itself. The castello was originally Hadrian's Mausoleum and the tallest building in Rome. Then the Popes used it for their fortress homes. Now it's a museum.

Just south of the Vatican, Trastevere is described as 'one of Rome’s most charming and happening districts'. Narrow, winding streets lots of boutiques and restaurants and plenty of gelaterias. Back south, crossing to an island, the reconstructed Ponte Fabricio is the oldest Roman Bridge across the river (AD62) 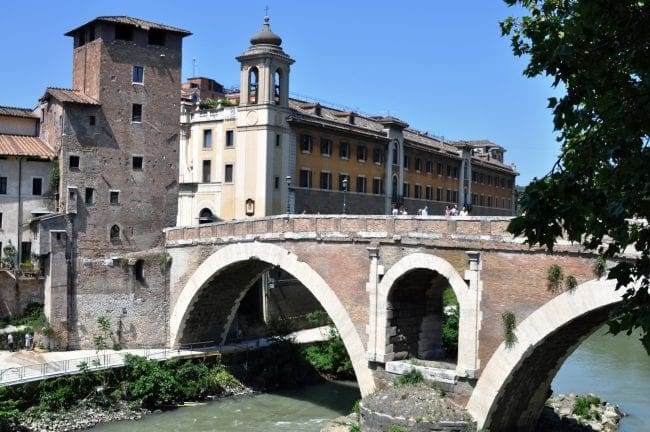 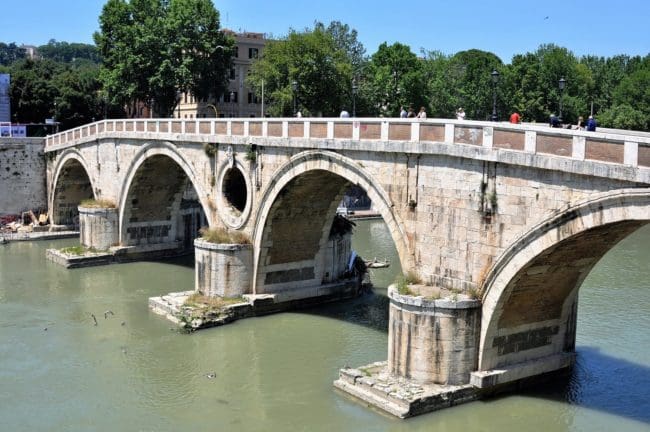 Opening times are unpredictable and annoying. The Vatican seems to shut down most Sundays, unless you count the Pope speaking prayers from his window, when he is at home. Most of the shops are closed on Saturday afternoon and all of Sunday too. Fortunately, there are a surfeit of cafes and restaurants. When in Rome - do what the Romans do, And when we do finally make it back, our hotel has a great roof top bar, with a view of the Colosseum.