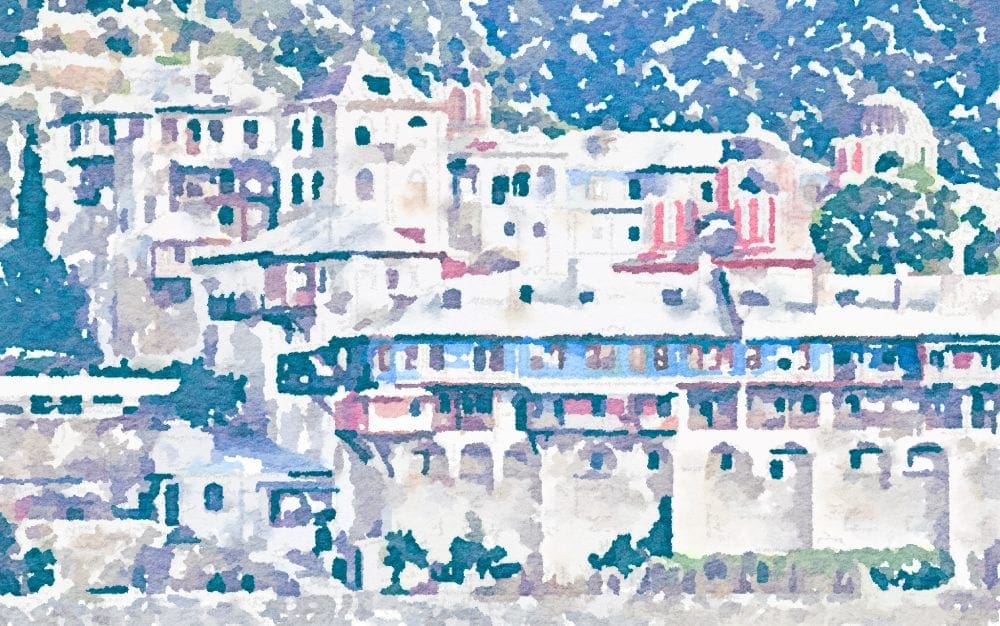 Mysterious Mount Athos - Greece in the Time of Covid - Part 2

Getting To Mount Athos - Ouranopoli

Mount Athos is almost a casualty of coronavirus, despite the fact that it was the main reason I came to Thessaloniki. The coach journey I booked has been cancelled and no operators are now offering the trip. But the hotel staff have galloped to the rescue and found me a taxi who will drive me 140 kilometres to Ouranopoli (at a price), from where the boat departs. The journey to the little port is very pretty, especially in the verdant vicinity of Halkidiki itself, replete with misty grey olive groves. The taxi driver says I don’t have to put on my seat belt - he has a fake plastic clip he inserts into the clasp to prevent the warning beep. 'Only made in Greece', he exclaims proudly. Well he said it…

Mount Athos, on the third, most easterly finger of the Halkidiki Peninsula, is 'an autonomously governed region of the Hellenic Republic, the most important centre of Eastern Orthodox monasticism in the country.' Commonly referred to as The Holy Mountain, it is home to twenty monasteries under the direct jurisdiction of the 'Ecumenical Patriarch of Constantinople'. The monastic traditions here date back a long time, to at least AD 800 and the Byzantine era. Today, over 2,000 monks from Greece and many other countries live the ascetic life in Athos, isolated from the rest of the world. The Athonite monasteries are also known for their rich collections of well-preserved artefacts, rare books, ancient documents, and artworks of immense historical value - Mount Athos has been listed as a World Heritage site since 1988.

The special jurisdiction of the Monastic State, gives its leaders the authority to regulate the free movement of people and goods in its territory; in particular, only males are permitted to enter; no women have been allowed in for over a thousand years. So the only way I’m going to get close is by boat.

I’m fully expecting the boat trip to be cancelled, but it isn’t and the ship is as full as current regulations allow. No Seating areas are marked to space out passengers. Naturally, these signs are mostly ignored. The monasteries are currently home to 2300 monks escaping 'normal life'. Most of the buildings have idyllic locations, amidst the craggy gorges and green scrub of the peninsula. either by the waterside or perched high above the sea, so the occupants can be closer to God. Some are reminiscent of the Tiger’s Nest in Bhutan. Here the Buddhist stupas are replaced by red domes or spires – green in the case of the monastery that houses Russian monks. While Simonopetra Monastery, soaring above the water, is reminiscent of the Potala in Tibet,.

Their decision to permanently self isolate does not prevent the monks from making the most of economic opportunities. Four of them, in full black priestly garb, descend on our vessel from a speedboat complete with baskets of ‘relics’ and other bric a brac for sale.

Back to Thessaloniki and then more monasteries at Meteora.