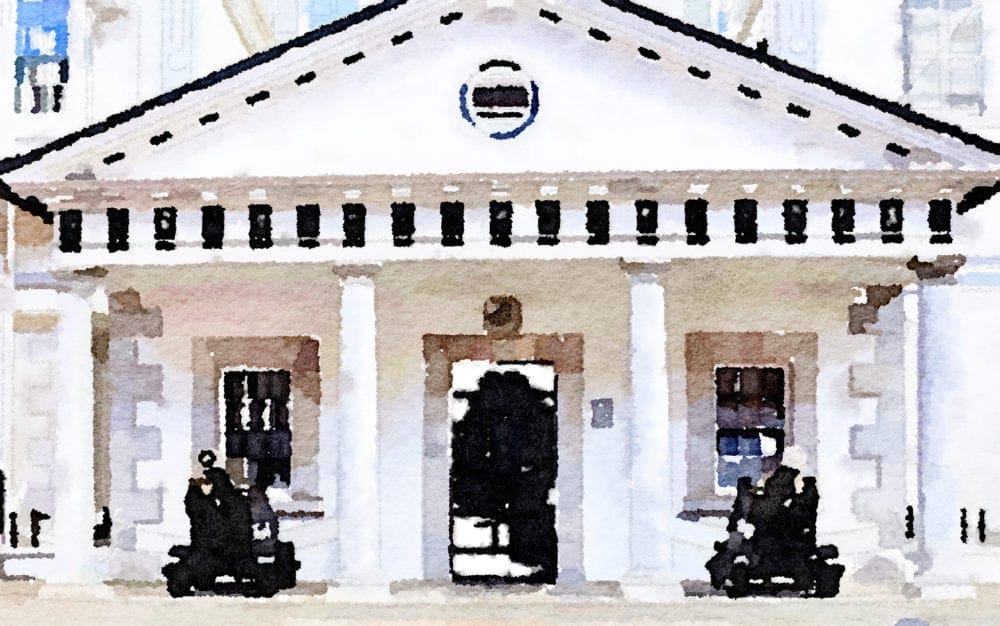 Gibraltar - A Weekend on the Rock

I hadn’t realised how huge and sheer the face of The Rock of Gibraltar is. It’s the first thing I see when I disembark the plane. It’s grey and brooding and there’s cloud hooked right across the two main peaks. Thisis a little frustrating when Spain to the north is basking in bright sunshine.

I also hadn’t realised that this is the fifth most dangerous airport in the world and the most dangerous in Europe. It was built, out over the water, by Eisenhower, during the war, and has since been extended a little further into the sea for passenger jets. Landing and take-off isn’t helped by the Spanish running an embargo on entering their airspace. Some steep banking is required. The road into Gibraltar town, Winston Churchill Avenue, runs across the runway. iI has to be closed when the plane lands, so that’s quite exciting too. They’re building a tunnel at the moment.

The town is squashed between the rock and the port and is a warren of narrow streets and little alleys, surrounded by a bastion wall. It’s not very easy to navigate the taxi and I’m glad I’m not driving. The wall runs all along the coast and right over the top of the 426m-high limestone ridge, to the sea on the other side. It was built by the Spanish, as a defence against the Moors, before the British forced them to hand The Rock over in 1713.

Whitewashed walls, bright shutters, bougainvillea, tapas bars, stained glass, Marks and Spencer, Debenhams, fish and chips, red phone boxes and pubs. The Mediterranean meets the UK. But it is quintessentially British, down to the three pin electric sockets. It’s firmly fixed in the last century and a little shabby - it could use some money spending on it. But so could most of the UK at the moment. The local people are bilingual in Spanish and English. However, when they're talking to each other they use a fascinating Spanglish dialect (Llanito), which I can hardly follow at all. (It makes more sense written down.)

The map tells me that I will see most of the town if I saunter along Main Street, which cuts right through the middle, alleys leading left and right. It takes me to the cable car in one direction and the atmospheric Casemates Square in the other. But I haven’t gone more than ten yards before I’m embroiled in a royal artillery reunion parade. There’s a band playing and the men are all togged up in uniform, complete with medals and are proudly bearing flags. Its Meg and Harry’s wedding today and it’s playing on the TV in all the bars. I assume this is part of the celebration. However, I’m firmly assured that it isn’t. I end up taking photographs of all the participants - and the lady mayor - and am given instructions on where to send them on.

Main Street next delivers a ceremony from The Re-enactment Society (scarlet coats and tricorn hats). It's rapidly followed by a parade of veteran cars. It’s all excitement here. Irish Town is a subset gaggle of old streets with boutique shops and pubs (of course). A final wander atop the walls and along more modern quays,. These are lined with tempting seafood restaurants. There’s a ship hotel too (nice cocktails up top).

The sun has come out; I did a lot of walking yesterday and The Rock is very steep, so I decide to eschew the cable car and take a taxi-van tour to the top. The vans usually wait till they are full, but it’s Sunday and astonishingly quiet everywhere, with most of the shops shut. Fifteen minutes later there are still only three of us on-board. Eventually, John, the driver, sensing mutiny, agrees to cut his losses and take just Julian and Jackie (holiday home in Alicante) and me.

The Pillars of Hercules

First, signs marking the Pillars of Hercules, dividing the ancient and modern worlds. I love the idea that I’m at the edge of the Mediterranean and the known world. (In Greek mythology Gibraltar was Calpe). We can see far out across the straits and I can make out the shadowy mountains of Morocco, only 14 kilometres away.

It’s a perilous drive up The Rock and along the top of the ridge. Being a taxi driver in Gibraltar definitely involves some skill. John knows nearly all the ‘apes’ (Barbary macaques) by name (though I’m not sure if everyone calls them the same names as him). And he doesn’t seem to mind being nibbled and swung on. They head straight for him and clamber in the taxi window. John wants us to let them climb on our heads. I’m not keen on having my pictures taken with animals that bite, especially when there are signs warning tourists not to touch them. So I’m watching the shenanigans from the (relative) safety of the viewing platform.

The views down the sheer face of the rock from my refuge, are worth the journey. There’s even a sandy beach below.

We’re also taken to St Michael’s Caves, once a home for Neolithic peoples. There are plenty of interesting tales about this site. Legend says that the cave is bottomless. It's also suggested that this was the entrance to a subterranean passage under the Strait of Gibraltar. The macaques used the passage to travel to Gibraltar from Africa. It was also believed that in 1704 Spanish troops spent a night in the cave after climbing up the precipitous east face of the Rock. Yet another story tells how two British soldiers descended into the cave in the nineteenth centaury and were never seen again. Today, the cave is ,used as a concert auditorium.

There are still some impressive stalactites. There’s also an ongoing light-show, which is a little too gaudy to enhance the experience.

Next, the Siege Tunnels. Apparently: ‘The inside of The Rock is an absolute labyrinth with secret internal roads and tunnels four times longer than those on the surface’. The tunnels were blasted out during the Great Siege of Gibraltar, which lasted from 1779 to1783, during the American War of Independence. The French and Spanish were determined to take advantage and repossess Gibraltar. General Elliott, who was in command, asked his engineers to find a way to mount guns on the sheer north face of The Rock, and the tunnels were the answer. There are cannons and information boards and statues of various military commanders inside. The uppermost part of The Rock is still a British military installation, and off-limits to the public. What with caves and tunnels, the saying ‘As solid as the Rock of Gibraltar' seems somewhat inaccurate.

There's another castle on the way down - unsurprisingly it's a one way system. This is known as the Moorish castle and is linked tot eh Moorish walls

It’s developed into a glorious day and I’m keen to see The Rock looming from the sea. So, I sign up for a Dolphin Safari. The views are great, as we zip over the wakes of various boats. The Straits of Gibraltar is one of the busiest shipping lanes in the world. And we are greeted by a large pod of dolphins too. They’re chasing fish, so don’t have much time for us, but they speed along, diving under the boat. They put the Olympic synchronised swimmers to shame.

I had planned to spend my last day by the pool. However, the hotel is swathed in scaffolding and the builders have returned with a vengeance after the weekend. There’s little let up from the drilling and when I pull the curtains I’m faced with a guy skipping up a gantry outside. Thank goodness for my noise cancelling headphones. and the botanic gardens. They're home to several more busts and monuments.