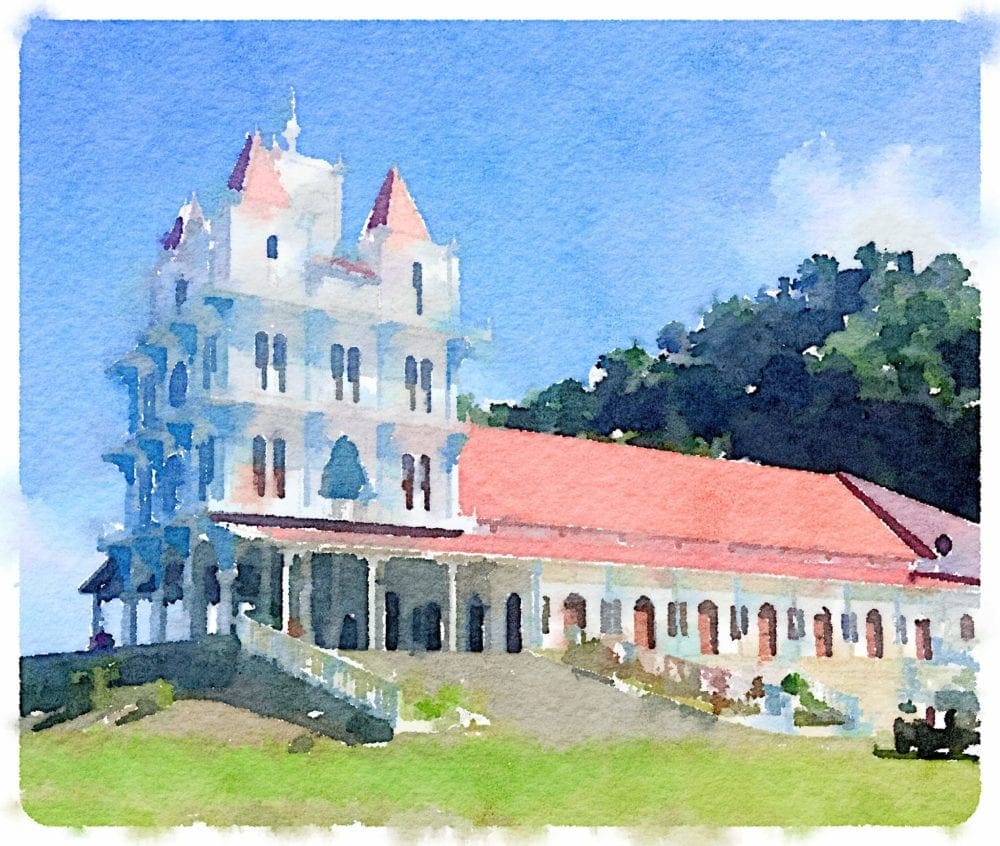 I know nothing about Wallis and Futuna, except that it’s in the middle of nowhere, it’s French and very few of the locals speak English, so it’s going to be taxing. The airport on Wallis Island (called Uvea by the Wallisians) is named Hihifo (excellent) and the plane is nearly two hours late landing from Kiribati, so it’s dark.

The Gang of Three in Wallis and Futuna

Arrival at Wallis Island is typically chaotic. The manager of my hotel arrives to meet me an hour late, even though the plane is already so delayed. In the meantime I have collected three middle aged (at least) men, Roy, Mike and Nigel, who are just beginning a month’s tour of the Pacific. By coincidence I know which tour it is, it’s the only, one as far as I know, available in this region. I scanned the itinerary and decided it wouldn’t work for me. And imagine a month in a very small group with the same people.

The main island is beyond exotic, rampant with multi-hued vegetation. Vines scramble over the palm trees (the Americans planted them during the war to camouflage their equipment and they now refuse to be tamed). The guide books say that the islands are dying as people leave. There is no obvious poverty, but boarded up shops, moth eaten motor scooters and rusty petrol pumps appear to have seen better days. There are relatively few houses, but the gardens are well kept, luxuriant and glowing with frangipani and crotons. The grass is manicured down to the water and edged prettily with stones. There are also almost as many curiously decorated churches as houses, each one more over - embellished than the last.

I’ve been for a stroll through the main ‘town’, Mata Ulu. There’s a post office, a cathedral, another church, and a gendarmerie. What I thought was a stadium with flags outside turns out to be the current king of the region's' palace. It’s all very quiet; there are hardly any people around.

A Tour of Wallis Island

I’ve managed to attach myself to the island tour organised for the Gang of Three. It takes three hours to circumnavigate the 35 kilometres of mostly unmade road round this volcanic island. Our guide and driver is Madame Manager. She reads to us from printed out notes. No tourist centres here. Highlights of Wallis Island are a fifteenth century Tongan fort, built out of volcanic boulders and a giant crater lake with plunging walls. After Kiribati and The Marshall Islands ,Wallis Island is positively lofty,  surrounded by a lagoon that is spectacular when the tide goes out, iridescent turquoise swirls in ultramarine dotted with palm bedecked islets.

My room is comfortable, if not luxurious, with a view over the islands in the lagoon. It’s inhabited by colonies of micro ants. It’s been a while since I encountered these on my travels. I’m not so keen on them in my bed. There’s a swimming pool but I haven’t yet of seen anyone using it. That’s possibly because the access door to this and the lounge area has been locked all afternoon. It’s not the most hospitable way to run a hotel. I’ve already been berated because I didn’t explain that I actually still wanted breakfast when I declined coffee. And I’ve just run the gauntlet again by inquiring of a petulant Madame Manager what there is to do tomorrow.

‘Nothing, it’s Sunday. Or you could go to the island on a boat.’

‘Yes please. That would be good.'

‘Oh dear. It’s too late to call now. They will be closed. Why didn’t you tell me you wanted to go earlier? ‘

The hotel is very much run with an eye to profit rather than service. It seems it’s not at all geared up for services or entertaining guests. Internet and food is eye-wateringly expensive. Madame Manager only gets animated when she’s discussing how much things cost. To be fair, there aren’t many tourists to practise on. Though you could say it’s chicken and egg.

I’m still not sure what else there is to do here now. It’s Sunday and Madame Manager is keen that we go to mass. This involves getting up at 6.30 so it’s out on two counts. There aren’t any beaches unless you take a boat trip. I suspect an excursion would have been fraught, even if it had been arranged. It’s decidedly windy - there are numerous white crests out there. And even if I survive the crossing (and the price of the boat) I don’t think there is anything on the motus, except beach. No shade and definitely no services. I’ve had an invitation to accompany the Gang of Three on a tour of churches. (You will go to mass.) Surely there can’t be still more of them?

In the end I meander out on my own to see how the elusive people of the capital, Matā'Utu occupy themselves on Sundays. Some of the boys are cracking cloth whips or playing baseball with a large wicker bat. A smallish group, mainly women, are singing melodically in the cathedral. The rest are holed up in a large covered area down by the quay playing bingo. I’ve heard that the folk of Wallis are on the bulky side and this is generally true. Most of the large bosomed pen-wielding ladies have decorated their hair with frangipani blossoms for their afternoon outing.

I’ve been eating with The Gang. Two of them are very knowledgeable, if very serious and literal. Nigel has actually been on both MasterChef and University Challenge. He also came second in the Gourmand of the Year contest at the Ritz - by half a point. This must be something of a contrast. They are all travelling solo; they tell me that they have all left their partners at home as aforesaid couldn’t be persuaded to come with them. I wonder if the partners are having wild parties while they’re away. There’s some prolonged bickering at dinner, over who should be eating the potato croquettes and who the rice. Relationships will be interesting after a month.

The ants are back in my bed this morning.

Today I’m flying to another French overseas territory - New Caledonia - so it’s check out time. CroquetteGate seems to be over and everyone is speaking. My itinerary matches the gang’s for another three days but I’m in a different hotel in Noumea. It seems I catch up with them again in a week’s time leaving The Solomons. It’s Nigel’s birthday today, but no announcements to this effect are made until the evening.

Miraculously, a menu has appeared. I suspect this is done deliberately in order that we only get to see the exorbitant prices just before paying the bill. Most main courses are around 25 euros. I’ve opted not to have lunch as it’s early and Madame has told us that there is a restaurant at Hihifo airport.

There isn’t (there’re some extremely good looking gendarmes though). In the departure lounge there’s a sad little kiosk with a few packets of unappetising looking chicken flavoured snacks and some biscuits. It’s also a good opportunity to see some more of the local people. It seems that they don all their finery for their plane trips. Whole families turn up in matching batik cloth and nearly everyone has several wreaths round their necks. Some are flowers (despite being forbidden by customs rules) but many have elaborate and heavy shell garlands.

New Caledonia next. Until 1961 it was part of the same French Overseas Collective as Wallis and Futuna.