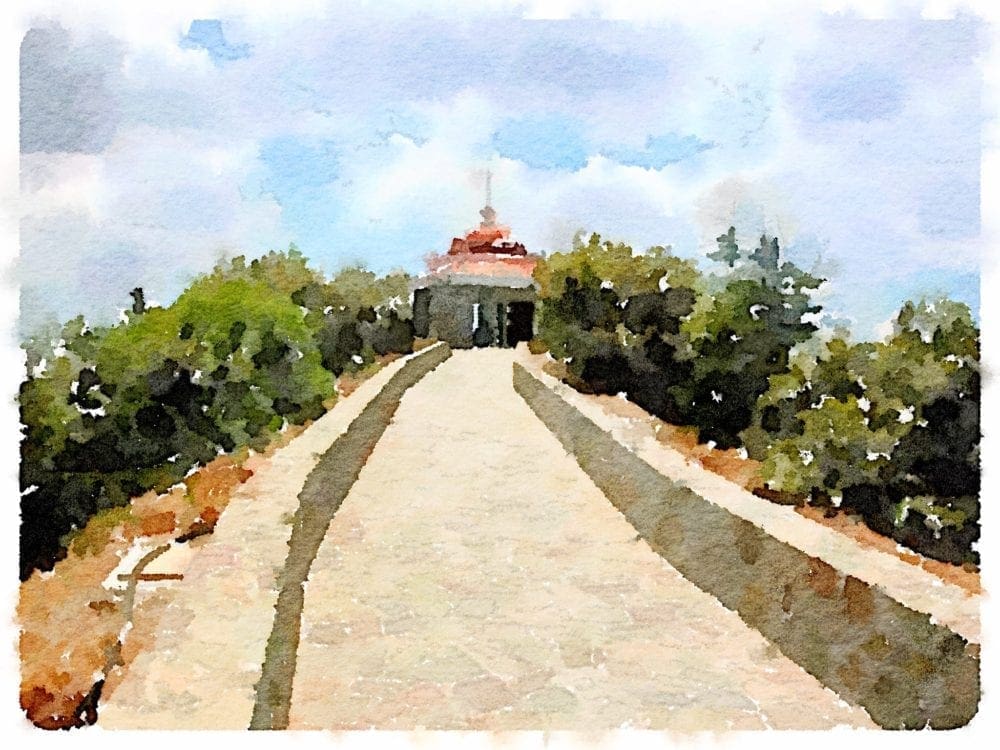 Cyprus -The Island of Love

Cyprus is the third-largest island in the Mediterranean after Sicily and Sardinia. Its location is a strategic one, close to Asia (Syria and Turkey) and relatively close to Africa.

Following the break up of the Ottoman Empire, Cyprus was placed under the UK's administration and was formally annexed by the UK in 1914. Tensions between the Greek Cypriots (77% of population)  and the Turkish Cypriots (18%), with some calls for union with Greece, led to demands for partition and eventually resulted in independence. After further tensions a separate Turkish Cypriot state in the north, the Turkish Republic of Northern Cyprus, was established by unilateral declaration in 1983. The resulting political situation is a matter of a continuing dispute and a UN buffer zone separates the two. So, some places to be careful when I visit.

Cyprus joined the EU in 2004 and the currency is the euro. Interesting fact: despite joining the EU as a de facto divided island, the whole of Cyprus is regarded as EU territory. EU law is suspended in areas where 'the Government of the Republic does not exercise effective control.' 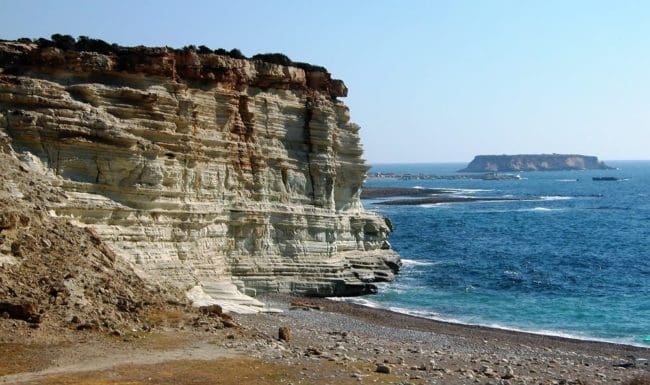 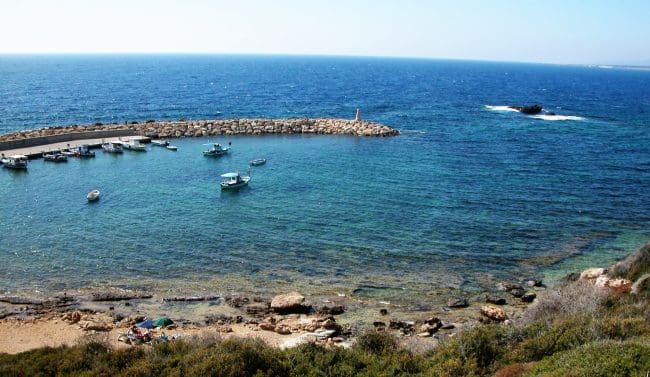 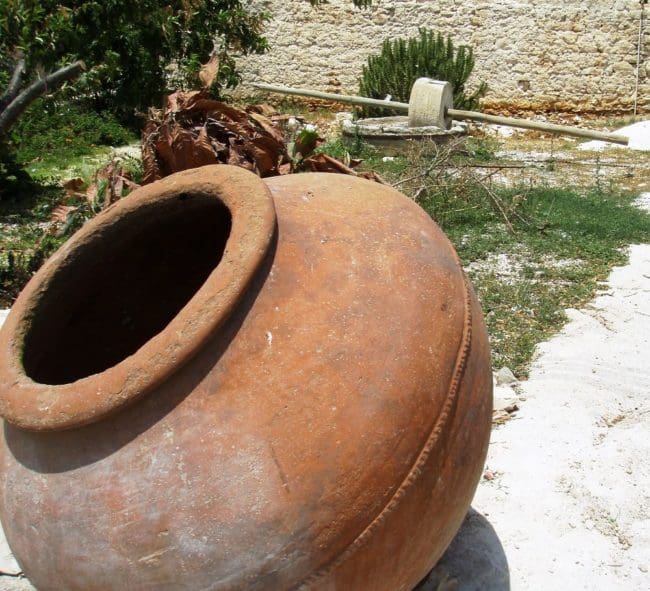 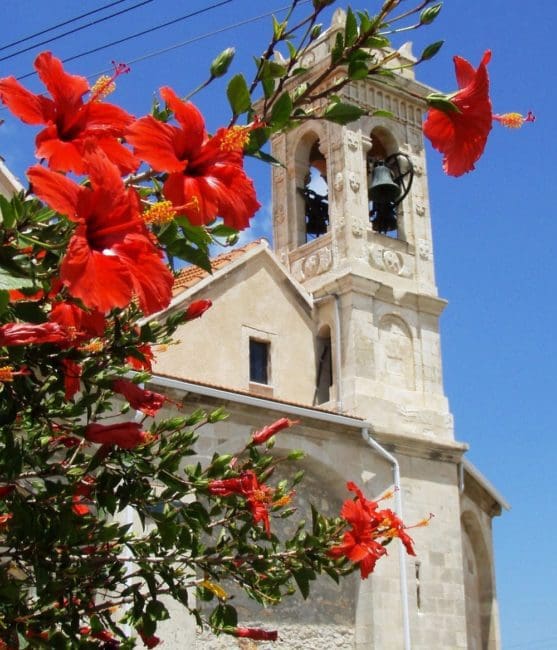 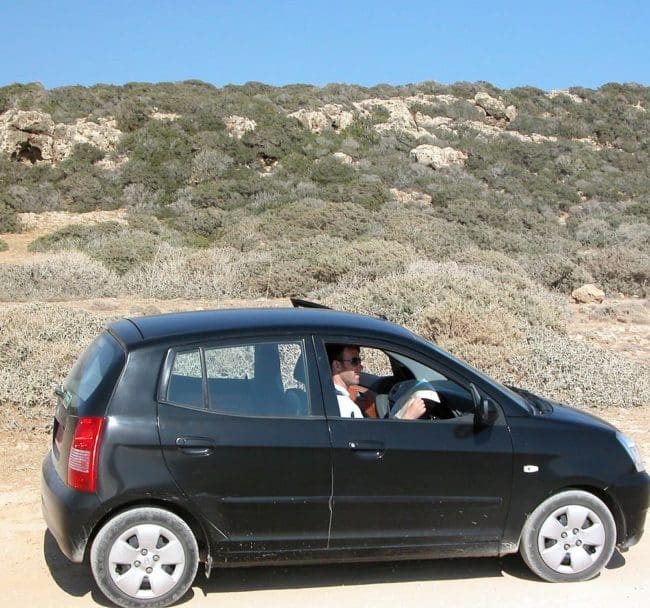 I'm with Alex and our base in Cyprus is Polis, an unspoiled small town to the north of Paphos. Polis means city in Greek, but fortunately this is a very quiet resort and here it is short for Poli Crysochous. There are a few very upscale eateries and hotels and some quaintly rustic buildings. There’s a small harbour, Latchi and easy access to the wildly gorgeous Akamas Peninsula. This is the place to go if you crave seclusion, tiny ports and stunning scenery. But the beaches (though quiet) are grey and pebbly. 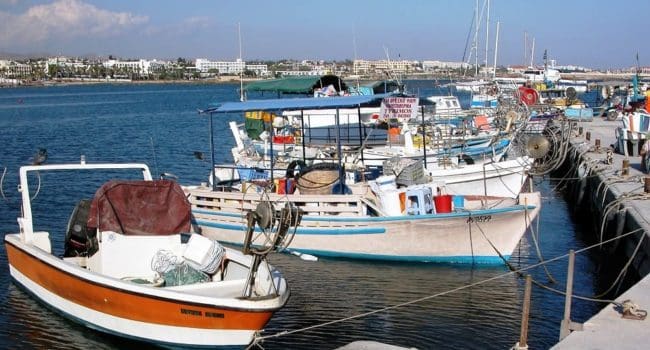 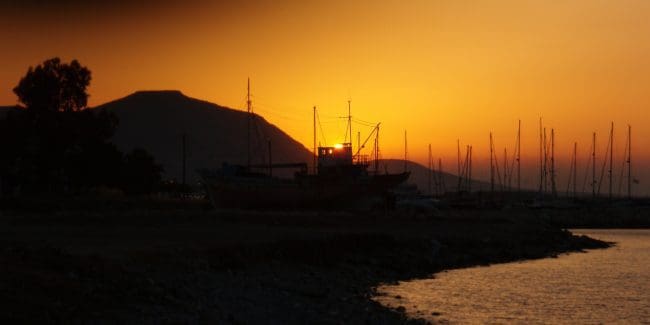 The whole of Paphos is a UNESCO world heritage site. It’s a bustling area with a whole spread of different historic sites - mosaics, Tombs of the Kings, an amphitheatre, and mosaics to visit in the archeological park. Most of the tourists are more interested in the string of fish restaurants along the harbour’s edge and the increasing number of bars. It’s definitely lively (and pretty noisy) at night. 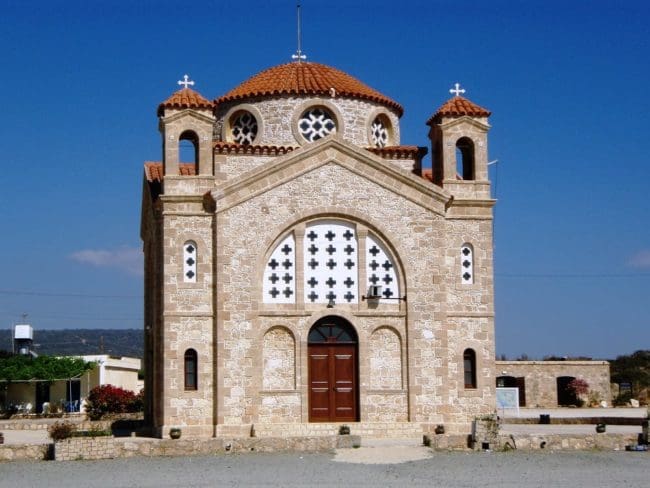 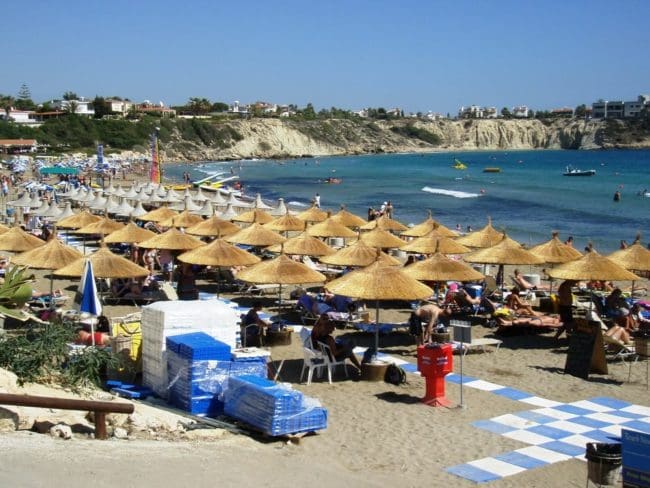 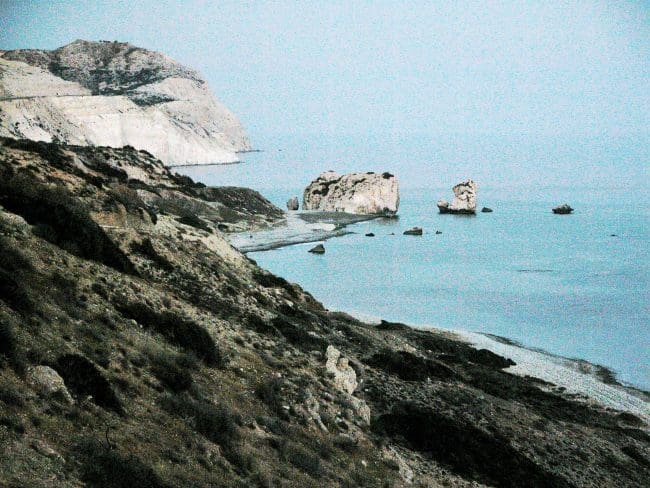 You don't have to venture far from Paphos for other tourist sights. There's a really picturesque chapel at Peya village and plenty of beaches like Coral Beach, covered nose to tail in beach umbrellas. Most importantly, Paphos is venerated as the centre of worship for the goddess of love, Aphrodite. This is based at old Paphos, 12 kilometres east of the 'new town'. Legend has it that goddess of Aphrodite, was born and rose from the foam (‘afros’ in Greek) near a stack off here. So Cyprus is known as The Island of Love.

Around and About in Cyprus

Taking a rental car is straightforward, once out of Paphos. Cyprus is one of the few countries in the EU that drives on the left and most of the roads are in good repair. It’s a fairly easy sweep south and east to Limassol and Larnaca. 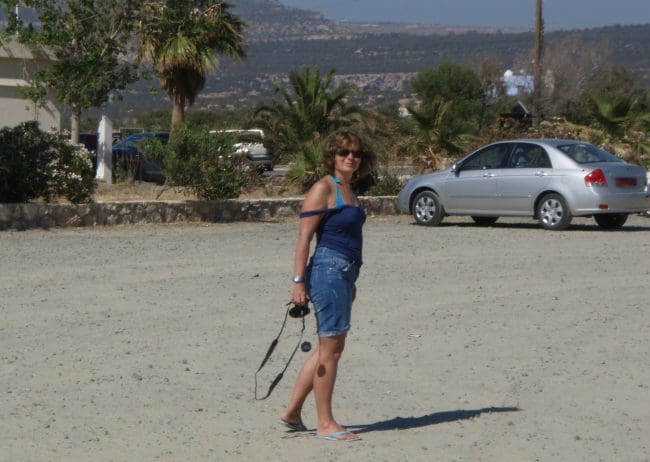 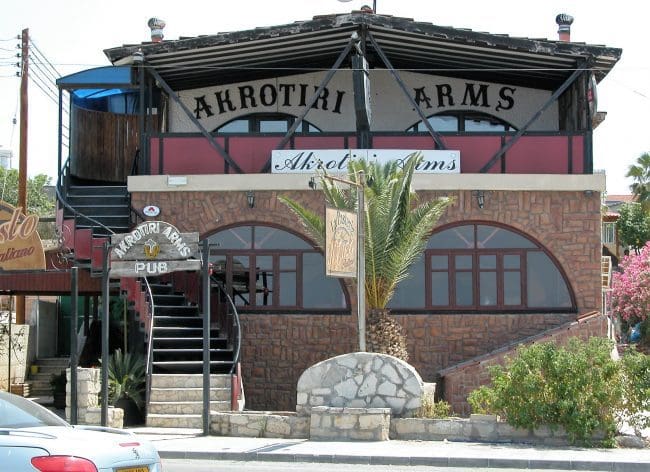 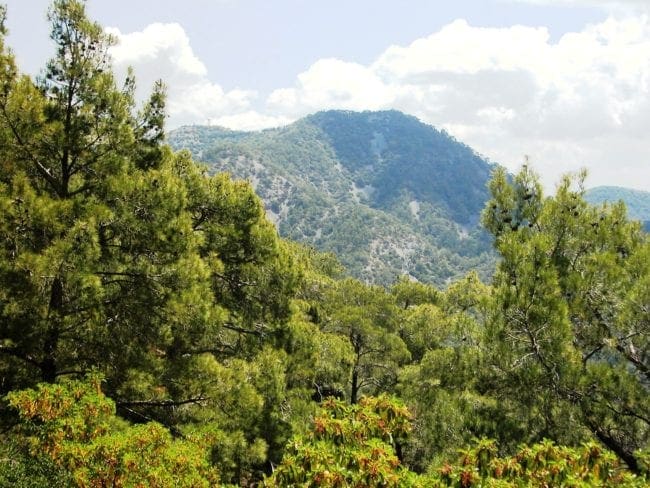 We dip in and out of the UK at Akrotiri. The British retained a stronghold in the form of the of the Sovereign Base Areas of Akrotiri and Dhekelia. Here they maintain an RAF airport and a signal station. It’s fairly dull, just an English style pub. Around here the countryside here falls into the same category, it’s a very dry and rocky country (all that sun comes at a price) and many of the buildings complement the surroundings.

Limassol, though, is an interesting town, much bigger than Paphos (second in size only to Nicosia, the capital). It's worth an explore, with a string of tourist shops and restaurants, an extensive beach and a pleasant esplanade. Its presided over by Limassol Castle.

It's prettier up around Larnaca, with some panoramic mountain villages like Pano Lefkara. Larnaca, the third largest city in Cyprus has some great beaches. Finikoudes is a sandy strip covered in straw beach umbrellas, backed by another palm-lined seaside promenade. We decide to abjure the delights of Aya Napa, further east, which has even more bars than Paphos. The most notable building here is the ninth century church of St Lazarus. It's said to be built over the tomb of the Lazarus who Jesus raised from the dead. 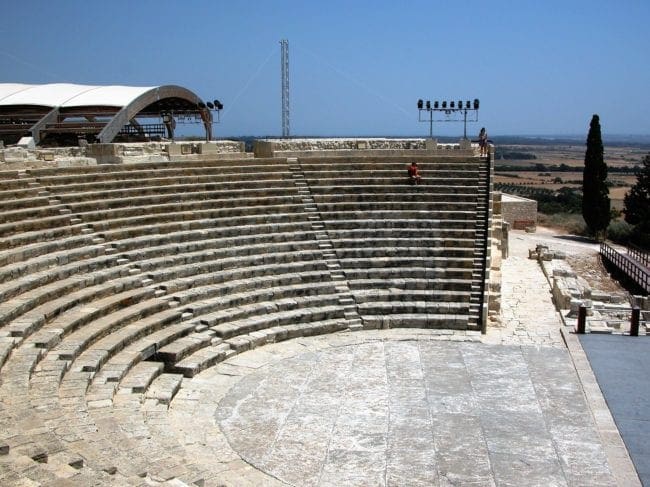 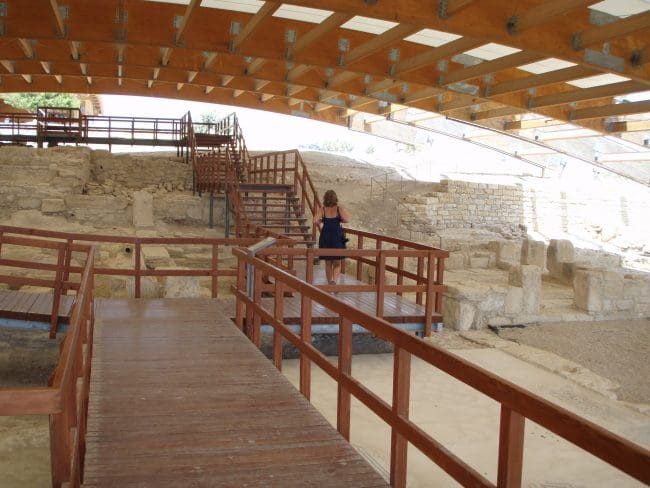 Cyprus has been inhabited since at least the tenth millennium BC. It was settled by Mycenaean Greeks and later occupied, in turn by the Assyrian, Egyptian, Persian, Macedonian, Ptolemaic Egyptian, and Classical and Eastern Roman Empires. The  Arab caliphates followed, then  the French Lusignan dynasty, then the Venetians and the Ottomans. So there's plenty of history to indulge in.

The Roman remains are most advertised and most accessible. Paphos has its archeological park and was the capital of Roman Cyprus. There are a plethora of amphitheatres. They are dotted all along the south coast. Most of the theatres are still in use today; the tiers have been restored. They mostly have great views too. A very helpful distraction if the performance isn't riveting.

We stop to explore at Kourion and Pissouri, both in the Limassol area. Kourion has arguably the most impressive finds on Cyprus. It was a Greek city state, the site of the Sanctuary of Apollo. Evidence suggests that the inhabitants of Kourion believed they were descendants of Argean immigrants. The kingdom was destroyed by a severe earthquake in 365 AD. The Graeco-Roman theatre survived, as did some private villas, There is most to see at the ‘House of Eustolios’, which was originally a private villa that was turned into a public recreation centre during the Early Christian period. There are some stunning mosaics and a bathing complex with the usual hypocausts. frigidarium,, tepidarium and caldarium. 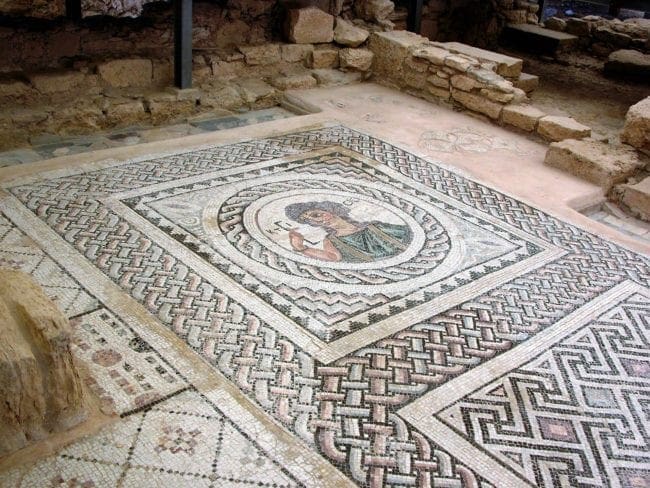 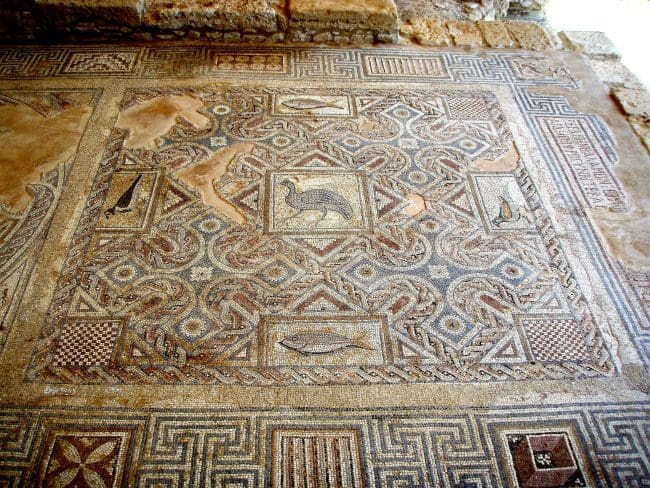 There are further impressive mosaic floors in the ‘House of Achilles’ and the ‘House of the Gladiators’, with the villas named after the scenes depicted on the mosaics. also an agora, a small temple, the Nymphaeum, dedicated to the water nymphs and a stadium. (That's a little way along the road.)

Pissouri close by has an amphitheatre too, but it's modern, purpose-built for concerts. Bands like Guns n Roses have played there.

The Troodos Mountains offer a more rewarding drive with really pretty scenery. The highest peak is Mount Olympus, though I don't think the Gods lived on this one. It has two ski areas on its slopes. Those aren't much use to us today. But there are ten Byzantine churches and monasteries to visit, listed together as another UNESCO world heritage site. (We don’t quite make them all). The msot famous is the Kykkos Monastery. It was founded around the end of the 11th century by the Byzantines, but has been burned down several times since and it's unclear how old the current building is.

There are some gorgeous illuminations. And the monastery contains an icon of the Virgin, said to be painted by the apostle Luke. It's believed to be responsible for numerous miracles and is kept partially covered. No-one is allowed to look at it 's said that they will be blinded, if they do. There's a long tale, involving a hermit, difficult to follow, which explains how it got here from Constantinople. But as I couldn't understand it I'm not going to attempt to repeat it. 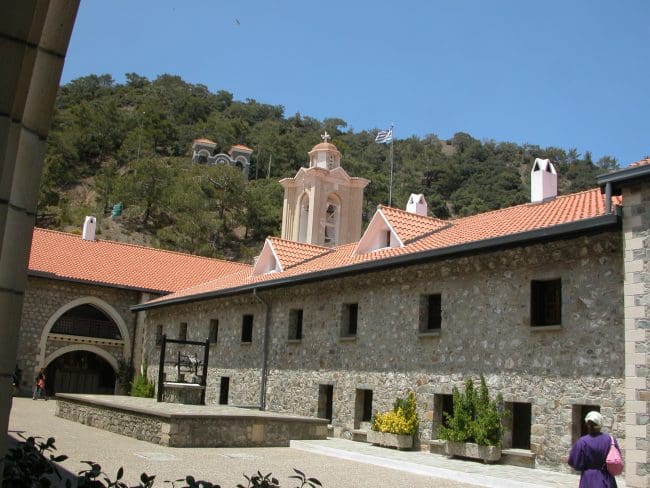 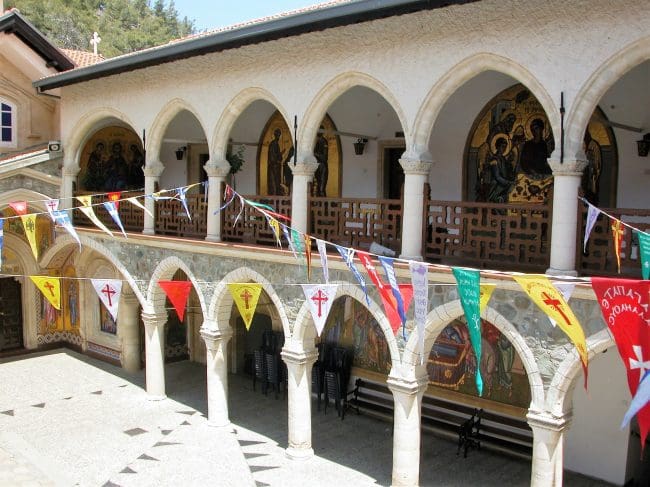 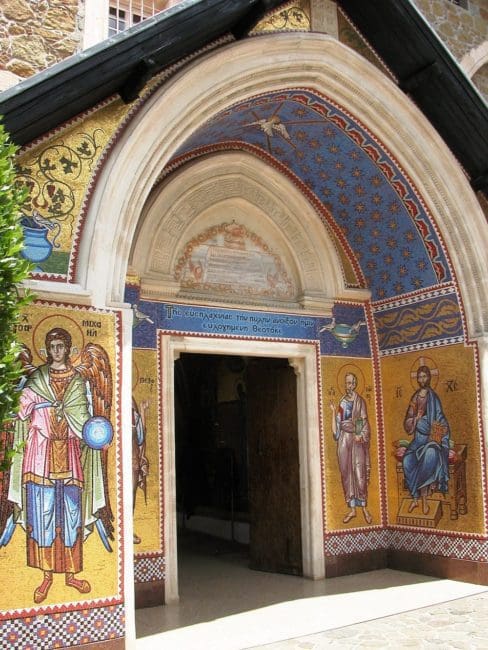 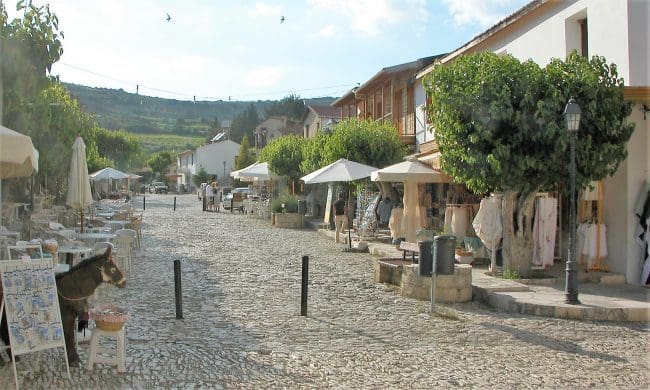 The first President of Cyprus, Archbishop Makarios III started his ecclesiastical career here, as a monk in 1926. He is buried close by.

There are lovely villages too, clinging tenaciously to the slopes. The most touristy is cobbled Omodos, known for its wine. But it's still tranquil in the heat. Road signs warn of the Cyprus mouflon, a rare variety of sheep, only found here. This is quite exciting, but sadly we don’t get to see one.

Most of the food is well known in the UK - there are a lot of Cypriot restaurants now and the traditional foods kleftiko, koupepia, souvla, sheftalia and loukanika are served on every corner. The Cypriots like their food. Other than the harbours there’s not much fish. Maybe surprisingly for an island nation, meat based foods definitely dominate