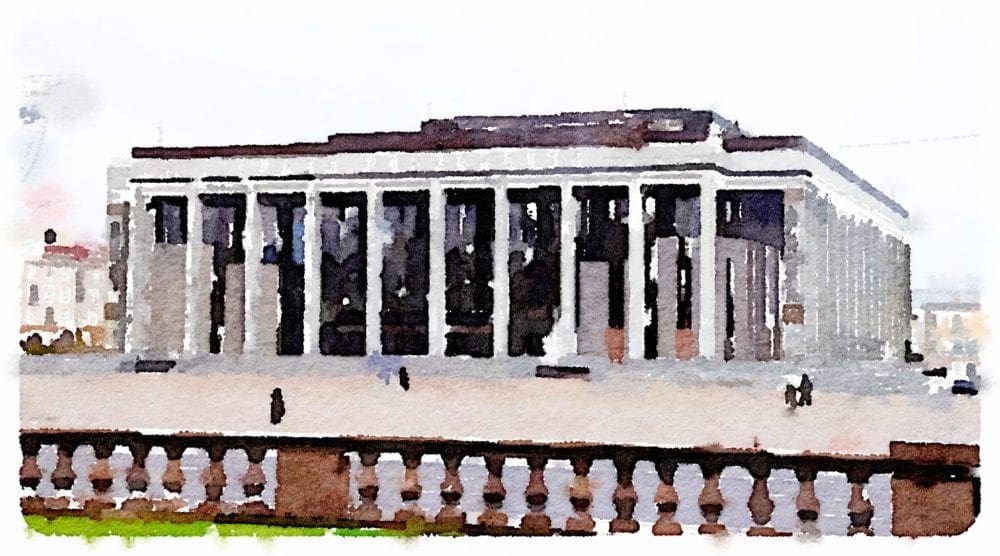 Friday 13th isn’t the most auspicious day to travel, but it’s only a number on a human invented calendar. Isn’t it? I’m having the usual nerves about setting off on my own, not helped by the fact that my Belarusian and Ukrainian beauty therapists have told me that I will get ripped off in taxis and cheated in restaurants as soon as the locals hear me speaking English. I’ve also read that Minsk is still very much ensconced in the Soviet Era. Alexander Lukashenko (complete with bad guy moustache) has been president since 1994.

The Belavia plane certainly harks back to communist times. It’s only four seats to a row, all grey, there’s no entertainment and about twenty people on board. The stewards are grey and grim faced too. When I checked in the clerk told me that there weren’t any window seats left. I think she just couldn’t be bothered to reprint my ticket. There’s an empty seat next to me. I’ve also got an emergency exit row, though God help us if there is an emergency. I can’t understand a word of the announcements. I can catch the odd bit of English. I’m sure I heard ‘lunch’ and ‘alcoholic drinks’. Perhaps that’s just wishful thinking.

‘Lunch’ does materialise, quite quickly. Some sort of grain (barley?), tinned carrot, tinned beans, some dry lumps of chicken and a roll with the Russian equivalent of a Dairylea cheese triangle. Only the triangle is edible. Having dispensed this gourmet delight the crew retreat to the back of the plane and read the in-flight magazines.

It’s even grey out of the window. We don’t seem to be able to escape the clouds.

And when I land at the airport it’s nine degrees, raining and the welcome sign over the door is - grey.

It’s time for exploration of Europe’s least liveable city (according to Mercer’s most recent Quality of Living Rankings, based on factors including political stability, crime, currency exchange, recreational facilities, housing and climate). I’ve left my bank cards in the safe and I’m carrying the minimum of money.

Previously, Minsk was only remarkable as the remote place where Phoebe’s scientist boyfriend went in Friends. It has mostly been reconstructed since the wars and is by no means boring. There is the anticipated (grey) Soviet architecture lining the route from the airport, the standard tall blocks of apartments. There are also enormous Soviet government buildings with red stars galore and more recent huge brutalist grey and glass plated edifices. But the roads are eight lane boulevards and the Soviet apartments give way to affluent baroque style (think St Petersburg, but darker), giant monuments, massive domes, parks with pillared entrances and huge squares.

There are also dollops of neo classical with columned palaces and museums. Even the public toilets are embellished citadels. I’ve lost count of the number of McDonalds I’ve seen, all housed in pseudo baroque. Some of them even have turrets. It’s quiet. Quite a few of the locals around are carrying small bunches of flowers. I’m not sure if this is a Saturday tradition or it’s a special occasion.

It’s another grey, drizzly day; the rain is helpful though. I’ve read that you’re not supposed to take photographs of any government buildings, the station or (especially) the KGB building, but there’s no policemen on duty to tut at me, delete my photos or even cart me off to prison. And, in my defence, I didn’t know it was the KGB building when I framed the photo. Independence Square is one of the biggest squares in Europe and also home to the National Assembly of Belarus and Minsk City Hall. It used to be known as Lenin Square, the main venue for parades and demonstrations.

Overall, Minsk feels more Russian than Russia. There’s also a Lenin Street (and a Lenin statue), a Karl Marx street, a GUM department store, a Gorky Park (and the KGB). Everyone speaks in Russian. There are very few signs in English and some saying they can speak Belarusian if necessary. It’s almost a given that I will get lost, and I do, but not too badly.

I’m fitting in as my blonde hair is straight today and I clearly look like a local, as people keep wandering up and chatting to me. I hope I’m smiling in the right places. There are a few groups of Belarusian tourists but there don’t seem to be any other Europeans. I’m the lone diner in the hotel restaurant, where I retreat in the end, cold and damp. I’m sampling draniki, the national dish, which is stuffed potato pancakes. They come with a huge dollop of cream alongside.

At night, many of the buildings are illuminated in gaudy pinks and blues; there is a fiery torch surrounded by a circlet and the national library is an enormous glittering disco ball. I can see where Kim Jong-un got his ideas for renovating Pyongyang. The military hats here would also give the Koreans a run for their money - they have enormous brims.

Just time for a perambulate down through the cathedrals and city halls of the ‘Old Town’, along the river. The cathedral service is being broadcast in the square through speakers. It’s peacefully inviting and there’s a stream of well bundled up locals (mainly female) through the main door. It’s packed inside.

Chauffeur Driven to the Airport

I have a chauffeur driven car to the airport. The effect is rather spoiled by the driver’s beanie. In daylight, I get a better look at the outskirts of the city. It’s grandiose, even to the edges. Beyond that is deciduous forest, like the parks, enlivened by gorgeous autumn colour. In the city, the golden yellow contrasts effectively with the marble facades, though it’s not quite New England, it’s missing the rosy red and orange hues. I seem to have escaped the worst aspects of the least liveable city in Europe. All I’ve seen is quiet, calm efficiency. The plane takes off early again. Ukraine next.