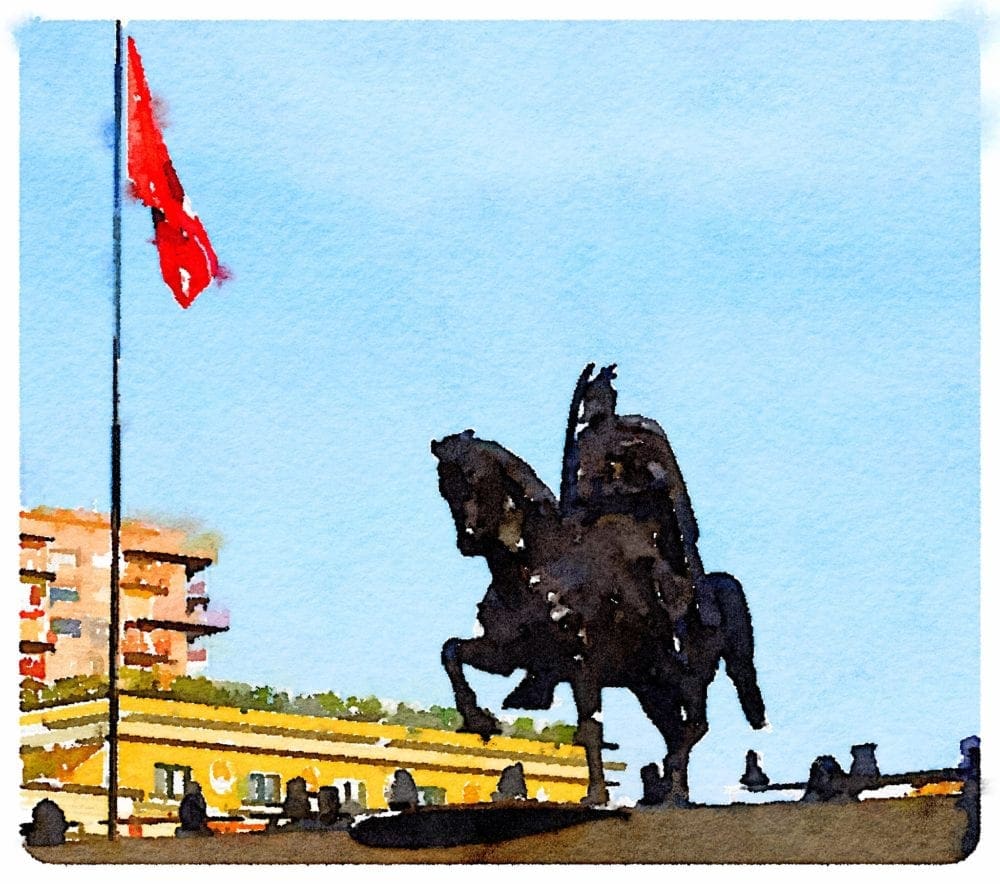 When I did my tour of the Balkans I couldn’t find an operator who covered all the ex-Yugoslav countries as well as Albania, so I reluctantly settled for missing that country out. Tantalisingly, we skirted all along the border. Two women on my tour had already been there for a long weekend. They assured me quite firmly that I hadn’t missed anything. In fact the word ‘dump’ was injected into the conversation several times.

Nevertheless, what was once the most secretive country in Europe has remained a white spot on my map for too long and I feel I need to see for myself if they were just unlucky. Maybe I’m not going to be very lucky either. When I booked I had no idea that an election was imminent. The FCO say this:

Summary – the political atmosphere is likely to remain changeable as the country approaches national elections on 25 June 2017; monitor local and international media, take extra care and avoid all political rallies and demonstrations; don’t attempt to cross any roadblocks set up by protesters as this might provoke a violent reaction

Getting to Albania - Too Many Babies

I won’t be forcing my way through any roadblocks then. The flight to Tirana is a contender for noisiest plane I have ever been on. Every row seems to contain a baby and I swear they are squalling in harmony. The performance lasts the whole three hours. The main international airport is named after Mother Teresa, who is claimed as Albanian, even though she was born in what is now Macedonia. I’m met by a really friendly driver, Ergi, who tells me that most of the flights are very noisy and all his passengers complain. He says ‘The Albanians have a lot of babies’.

The capital centres on sprawling Skanderbeg Square, with (naturally) a statue of the national hero, Skanderbeg, who held the Ottomans at bay for 25 years in the fifteenth century and frescoed Et’hem Bey Mosque. My hotel is just along a tree lined boulevard, with views of illuminated squares, and the delightful garden bar provides gentle pre-bed relaxation.

Half of Albania in a Day

I only allocated one day here, as the reports were so far from glowing. The guide books reckon that the sights of Tirana can be seen in half an hour, longer if I visit the park. And there are some museums. I’m thinking half a day walking round town and half day in the tempting gardens by the pool. But then Ergi suggests a tour of ‘two or three cities’ so next thing I know I’m en route for two castles in the north.

Kruje and Shkoder are both hilltop fortresses with good views across the countryside. And both involve very steep slippy approaches on ancient stone paths claiming to be first century B.C.

Kruje has two interesting small museums in addition, one devoted to about a thousand different images of Skanderbeg, nose, helmet and plume featuring prominently. The other is a house furnished as it would have been in Ottoman times, a very well organised and detailed display, the women carefully sequestered from the men. Ergi tells me that many Moslems here are only Moslem in name. He is a Moslem but he drinks alcohol, eats pork and has never been in a mosque, Life is too short, he says.

There’s a nice little bazaar at Kruje, though the sellers look a little mournful and I feel mean for not buying. Maybe that’s their modus operandi.

Rozafa Castle is more sprawling and ruinous, usually known as Shkodër Castle as it's near the city of Shkodër, in northwestern Albania. It rises imposingly on a rocky hill, 130 metres above sea level, and you have great view of the confluence of the Buna and Drin rivers.

Shkodër is one of Albania's oldest and most historic towns, as well as an important cultural and economic centre. There’s a pretty lake which is shared with Macedonia –we’re very close to the border; it has little rush covered islets in a UNESCO park. Surprisingly, this is the largest lake in Southern Europe.  And no fewer than three rivers, the Drini, Buna and Kiri are scenically meandering in the valleys below the castle. Ergi says he had his wedding pictures taken here. We stop for a drink at a lakeside café. I can confirm that Ergi is not averse to a beer, even when driving. Though he did at least stop at one.

Lunch can only be described as mediocre. I join Ergi in a fast food joint and we are served shredded dry overcooked chicken with some very bland chips and soggy salad. To my relief Ergi says it’s not very good, so I don’t have to pretend to like it. It’s cheap - only a euro each. Ergi tells me he only earns seven euros a day for this job. He was the national champion at weight lifting for three years, then he broke his arm. Now he supplements his income by doing private work, renting out a flat and managing a kitchen wares shop (his mother in law does the selling.) It makes me very grateful for what I have.

It’s a good trip out and I’m very glad of the opportunity to see more of the country. Ergi says I have seen half of it now. The castles on their own were worth the visit.

We get back to Tirana just in time for me to hare madly down to Skanderbeg Square taking pictures as the sun goes down. I manage to find enough light, at the right angle to capture the statue, mosque, blue domed orthodox cathedral, famous clock tower, frescoed national history museum and the beautiful crimson and yellow ochre Italianate government buildings. So I'm feeling very pleased with myself. Then I realise that the memory card in my camera has partially fallen out and hasn't recorded any images. I have to hurtle round the whole route again. I can confirm that the sights of Tirana can be done in fifteen minutes.

Is Tirana a Dump?

What’s the verdict on Albania? Well it’s most definitely not a dump. Tirana doesn’t make me squeal with excitement, but it has tree lined streets, smart pavement cafes and some good food. There are free street concerts in a couple of corners and it’s lively. It’s a pleasant place to be.

The same sentiments apply to the countryside. We followed the chain of mountains north. They are rugged, but not amazing. The lower slopes are covered in pretty greenery. Farms and vines line the road for much of the way. There’s a great deal of young maize growing, some small modern industrial areas, very high tech service stations, some roadside stalls and a carwash every 500 metres or so. It seems to be the key service provided in the country. Ergi says that all the hand car wash operations in England are run by Albanians. He should know - he lived in Birmingham for a couple of years.

The elections? A couple of roads in town are blocked but I don’t see anything other than a diversion sign. And I can hear a megaphone or two from my bedroom. But it’s all very low key. Ergi’s not going to vote on Sunday. He is registered in his home town in the north, (we drove through it and waved to his sister’s house). It’s too far to travel (It’s also Eidh, so the traffic will be bad) and it’s his daughter’s birthday to boot. He’s going to take her to the beach at Durres, the second city of Albania. And the president, who’s doing a good job, will get in anyway.

I’ve had a very lovely day with my good natured guide He clearly loves his country and is keen to share it. Will I come back to see some more? If I do I will certainly get in touch. Will I tell people in the UK that it’s not scary here like they’ve been told? I’m happy to do that. Would I class it as one of the top five countries in the world? I’m not sure I can go along with that one. And maybe it’s unfair to judge. Isn’t it a bit like trying to critique England after only taking a trip up the M1? However, I can definitely put the taxi-drivers in the top percentile.

I should know better than to make judgements before I’ve entirely left the place shouldn’t I? I’m already stressed by the information that I need to check in just one hour before departure for my Blu Express flight to Rimini and San Marino and therefore only need to order a taxi at 6. 00 a.m. I’m not unhappy about this, as I don’t deal with an early alarm well, but I’ve never been on an international flight where the recommended check in time was under two hours before. ‘I check with hotel desk twice. ‘It’s a very small airport’- they say. I don’t sleep well and come down early just to make sure, but there is no taxi.

Eventually, the receptionist calls a city cab. Ergi said it would almost certainly be him who would come, but he would wait for the hotel to call with the arrangements. I assume they never did. Once at the airport (after a pell-mell taxi ride on fortunately empty roads) things don’t improve. My ticket (agent bought) says Susan Rogers and my passport Susan Patricia. So I am forced to buy a new ticket for 60 dollars. No-one has ever been that pedantic before. They call it ‘a penalty’. I call it a nice little scam. I don’t think I will bother to come back for the other half of Albania.

The flight isn’t even being run by Blu Express, who I booked with. The operator is new low cost company Albawings, who own two planes of uncertain vintage. The seat belt is so old I can’t work out how to fasten it and the TV monitors slung above the aisle are Dark Age creamy yellow. Not that they seem to be working. The stewardesses hand us a plastic cup of water and then sit at the back of the plane and giggle loudly (the babies have just stopped wailing). It’s going to be a long hour. At least the water’s free. That’s one up on British Airways coming out.