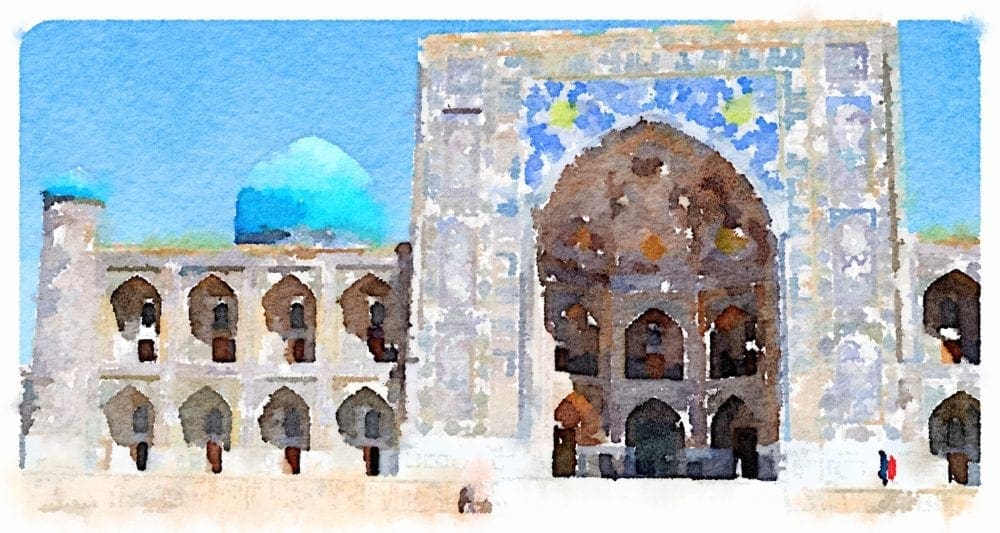 My phone tells me I’min now in Uzbekistan – I have a signal again, but we’re still sitting in the train on the border with Turkmenistan. Our sightseeing in Khiva is due to start at 11a.m. but as it’s now 10.55 and we’re not yet in Urgench, our first stop in Uzbekistan, so I don’t think that’s likely to happen. Uzbekistan is immediately distinguished by mud walls, thatched outhouses, donkey carts and a girl in a miniskirt. As I noted before, and as has been the case all through Central Asia, the women generally wear long floral skirts and headscarves. The men sport jeans, tee shorts and windcheaters. Ukraine was the breadbasket of the USSR and Uzbekistan the cotton basket. Fields of fluffy bushes are already visible.

I’ve been to Uzbekistan before, but not to Khiva, so this will be the most interesting part of my journey here. Finally, we make it to the most westerly of the great Uzbek Silk Road cities.  The 5 Ms of mosques, minarets, madrassas, mausoleums and museums remain the highlights. There's a fortress Ark here, which contains all the sights.

The contrast with Turkmenistan is stark. The people are incredibly friendly, queuing up to have their photos taken in long strings across the main square. TC Ted, like a baby in his harness, (fashioned out of my listening device lanyard), attracts constant attention and greetings. He attends a wedding too. There are streams of brides incongruously wearing white European wedding dresses entering one mausoleum in various elaborate processions. I have a lively conversation about cameras with the wedding photographers, who abandon their task to try out my telephoto lens.

We eat afternoon tea of overly sweet pastries, Arab style, on a raised carpeted platform with a low table. Then Tino from the train insists that we climb a 100 step narrow tower, despite the fact that the guide has told us it is really difficult, as there is a dark and steep spiral staircase going up and it's even worse coming down. There is an alternative 40 step wider tower too. The guide was right., but here are great views.

Today, a return to Bukhara. Fortunately, we begin with two sites I didn't see last time. First, the emir's summer palace, somewhat ironically, styled after the winter palace in St Petersburg. Here, he indicated which lucky lady he had chosen for the night by throwing her an apple.

Next, the hole in the ground prison at Zindon where Stoddart (and Connelly who foolishly went to look for him) were imprisoned when trying to undermine Russian influence in Bukhara. The emir was not impressed and eventually executed them both in Samarkand. It's all fascinatingly explained in Peter Hopkirk's The Great Game.

More 5 Ms revisited: The fortress Ark, crenellations framed beautifully against a blue sky, the sultan's (Ismael Soltany) ancient mausoleum in the park with the swan boats, the Chor Minor - a madrassa with four minarets that features on the cover of the Lonely Planet Guide, the carved mosque pillars, the oldest minaret (this time we’re told it's all original), the fanciest bazaar and the elegant cafes in the squares and round the ornamental lakes. And another house, the Mickey House, so that's the sixth M.

Ginger and cinnamon tea in a traditional tea house and a productive and lucky day. I have bought a Christmas tree decoration to match the dozen, now eleven, I bought in Samarkand (and some spares) last time. I have lost an earring, my laptop, my passport and a bracelet, and had them all returned (I found my passport under my bed).  Dinner is a barbeque on the platform at the station, surrounded by freight trains. It’s a little bizarre.

Now the 5 Ms of Samarkand again. A return to Tamerlane’s Tomb and a wave to the Hotel Asia, across the park (its' now got a name), and the balcony with the view I had before. It’s all still very gorgeous, very restored and very upmarket. The Islamic architecture is in stark contrast to the art nouveau and realist architecture of the apartments and shops in the adjacent ‘new’ town constructed by the soviets. Another visit to the unmissable and unique Registan, the growing avenues of souvenir and tea shops, before an unexpected adventure.

The Road to Tajikistan

The train is going onto Tashkent, and I've been there before. Passenger Shane and I noticed that Tajikistan was tantalisingly close, so we have planned a last minute side trip, with fellow passenger, Farida, over the border. This involves a four hour taxi ride through the cotton harvest. There are cotton bales by the sides of the highway (as well as the usual flocks of goats and meandering along it) and minivans stacked to the gunwales with cotton pickers and/or heaps of the fleecy white stuff itself, while wisps of cotton float all across the road. As dusk approaches the darkness is enhanced by the pall of smoke from the burning of the cotton bushes.

I’m riding in front of the van to try and ward off motion sickness. As always, being front seat passenger is a little stressful. The drivers here have no sense of lane awareness at all. We are continually within millimetres of other vehicles. At one point, when it is now dark, our driver careers down a bank, as he realises he has taken the wrong turning and then overtakes on a road that is rough stone on one side, as it is being repaired. We veer hurriedly back to the carriageway as a mammoth unlit farm truck appears out of the gloom in front of us. But it’s six o’clock and we’ve made the Tajik border.

There is one customs man. He scans my form, groans and instructs me to re-do it and lie. I have written that I am taking out more U.S. dollars than I brought in. That’s because I paid my train bill in euros but got my change in dollars. Uzbek bureaucracy can’t cope with that. ‘Have a good journey’, he says.