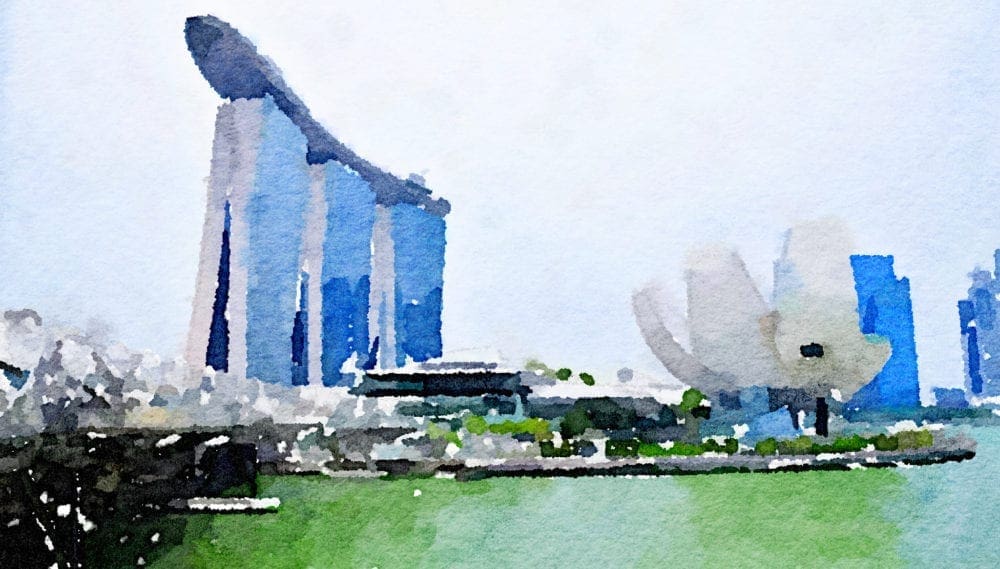 I've flown in from Perth. An eight mile walk in steaming Singapore, revisiting old haunts. At least that’s what I set out to do, but Singapore has changed considerably over 20 years. as usual it's grey and humid (I'm not sure I've ever seen the sun here), but Chinatown has become a bustling tourist centre, with a brand new temple, bright signs and a bustling, formal food court. Admittedly, it was previously quiet and not the most exciting of experiences, but now it no longer feels authentic.

Boat Quay and Clarke Quay,  along the river, had already been over restored. They're mostly modern glass and steel restaurants, suspended over the water now. And the whole of the Bay Area,  to the south, has been remodelled. There’s a very glitzy shopping area, and some new  museums (one inside a giant lotus). The new Bay Gardens  are visible  for miles, Kew meets Star Trek, with huge Stonehenge shaped  futuristic apartment blocks, towering  illuminated sculptures and glass exhibition domes set amongst the tropical greenery. It's very easy to navigate if you're up for hiking. There are walkways, escalators, lifts and linking bridges, creating a circular route. On the east side,  a monstrous spiky silver sphere, housing yet another display. We have the armadillo, they have a hedgehog. The famous merlion fountain has been moved and placed at the end of a new foot bridge, leading towards the Padang and its cluster of colonial buildings. The whole area is teeming with camera-wielding tourists; there's plenty to photograph.

Singapore is now one huge theme park. I can’t decide if I like it or not. Part of it works, a sci-i panorama, with  the backdrop of the skyscrapers and the business district. But it's over-cooked at times, 'older' buildings too pristine. There are sprinklings of decidedly tacky plastic looking  objects in  the new lakes. And the knot of historic buildings around the Padang is being swallowed up, in the midst of all the high-rise, though some civic buildings have been converted into stately new galleries. The rectangle of worn grass that is the famous Padang  itself is fenced off and teeming with men in overalls. They're getting everything ready for the impending Grand Prix.

I’m exhausted after trudging around in the humidity, so I decide to adjourn to Raffles Hotel for a sentimental drink. Most of the arches around the square of the building are papered over - I’m not sure if it's being renovated. Raffles City Mall has  sprung up opposite - of course. And there’s a very, very long queue winding up the stairs to the Long Bar. I think it's home time.