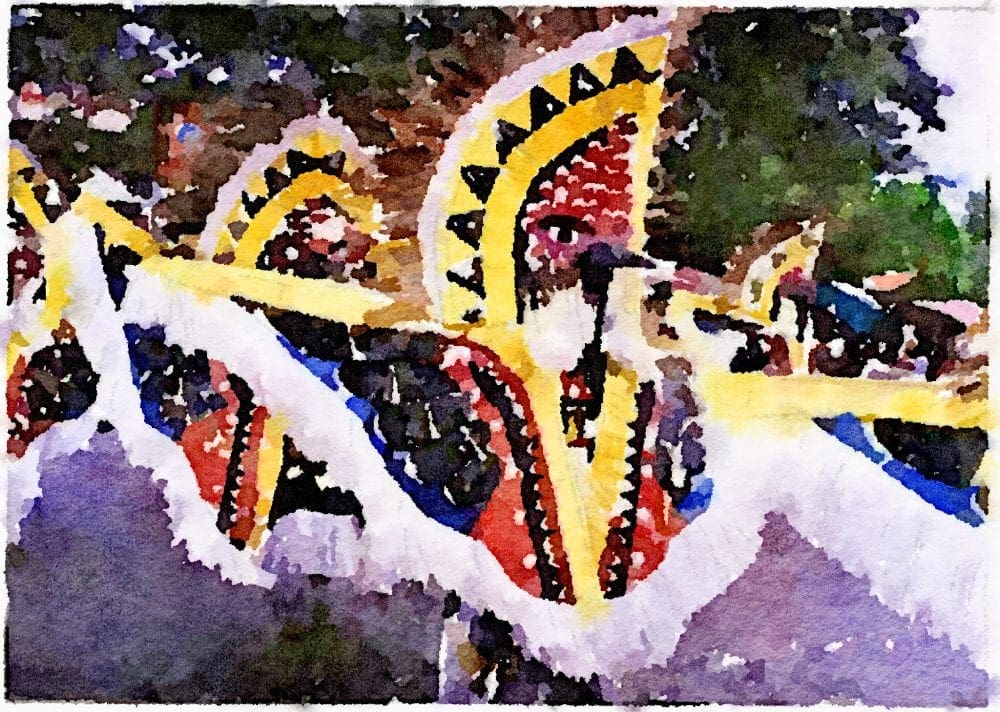 I’m planning to go to Kalibo for the weekend with Elaine. The biggest festival in the Philippines is held there annually - the Ati Atihan. Just about to sneak out of school at noon to go to the airport in Manila when we are told there is a riot in Makati. Pro and anti Erap marchers have clashed and pushing and shoving has escalated. About twenty people hurt but nothing too awful in the end. Numbers at the shrine continue to swell. The BBC says hundreds of thousands. We know better but still a fair number. The Embassy says we are to go nowhere near.

Then news arrives that the chief of police and then the head of the armed forces have withdrawn their support via phone calls to Erap. Ironically, the pro Erap supporters have forced the situation by beginning the violence. The protestors have said they will stay until he goes. The only way to stop the violence then is for him to go and the police don’t want to hurt their own people.

We learn all this through the usual text messages. This is effectively a bloodless coup (just like last time). Erap cannot continue and offers to hold an election in May at which he will not run. They won’t have it and now it is really only a matter of time before he goes. The stock market is already on the up as it all ends so peacefully.

Eventually, to the airport. Arrive there to a phone call from Lyn. Karsten from Bohol has arrived at school to see me. What timing – he is only in town for one night on his way to Puerto Gallera.

From one demonstration/festival to another. “Erap resign” signs all over Kalibo, a city on Panay Island. Only tricycle taxis here and Hugo, the drunk Swiss hotel owner meets us with one and takes us back to our bungalow style room. The Hibiscus, pretty, but well out of town. Well at least we’ll be away from all the noise. Then to the carnival. Lots of dancing in a big arena covered in flags and banners. Roll out the barrel and the birdie song at least a dozen times and without a drop of alcohol I end up leading snake dances all round with hordes of Filipinos tagging behind. They keep dragging me back in. White faces are such a novelty and white women on their own almost nonexistent. Elaine hides and builds up a file of evidence on her digital camera.

The programme says the main parade is at 7.30 a.m. We take a tricycle to the main square at 8.30. Nothing happening. I ask a stallholder who peers through balloons and feathered tribal masks at me. He says it starts at 9. I say “It is 9”. He says " Maybe 10 then". About 9.30 are were sounds of drumming and the tinkling of percussion and the parades begin. This seems to be a time for massing in the Plaza and we perched on a wall there for really good views of endless costumed revellers, tribal dancers, snake charmers, grotesque papier mache animals, decorated floats (Mary and Jesus statues in various forms, but usually a plastic modern doll) and hundreds of other outfits – witches/ skeletons/lion fish/a bright pink paunch in a nappy. Most people have painted faces and we get our faces blacked for us too. The festival re-enacts the handing over of Panay to the Spanish by the local, Borneo style tribes. They were head-hunters until comparatively recently.

These groups process round and round the square all morning – absolutely fascinating though we get the birdie song rather too many times again. Lunch in a restaurant facing the Plaza ‘Sorry chicken’s off Ma’am, sorry the last coconut’s just gone ma’am”.

Then it begins to pour down, through the plastic roof in buckets and into buckets. The street outside is like a lagoon. The parade begins again while it is still bucketing. This one includes all the previous tribal groups and more besides, businesses, banks, all marching along jigging to the Birdie song.

Another text message. ‘We are at the gates of the palace – face to face with pro Erap police”. Erap has finally given in and left the palace and half naked men cavort with Erap resigns in white paint all over their backs. Gloria Arroyo is being sworn in even as he leaves. Celebrations in Manila and even bigger ones here.

We watch with our hair becoming progressively more sodden and a veritable river running down my back. This parade goes on for 3 hours. Fantastic, though the revellers are also becoming progressively drunk, carrying large bottles of vile green spirits strapped to their waists as well as the large metal drums. As they drink they lose their inhibitions and keep approaching, giving us thumbs up signs, smacking palms and trying to get us to join their groups. One guy who said he was “a sailor” sweeps me way and won’t let go of me. Every time I try to slip away he grabs me again and says not to worry, he is a good man. Eventually I hide in the church. I am definitely a novelty as I am interviewed for TV four different times by different channels. Shame I can’t see it.

Exhausted by now. Back to the hotel for a nap and then out to a Chinese meal and visits to the night market. Lots of mini gambling type games hidden at the back. Roll coloured dice; bet on the right colour and so on.

Finally to last night’s dance arena but too packed to move tonight – very sad. A spectacular firework display. Roman candles that split up like pools of wiggling sperm as they shoot away. Home to bed and our quiet area. It is unfortunate that Elaine snores.