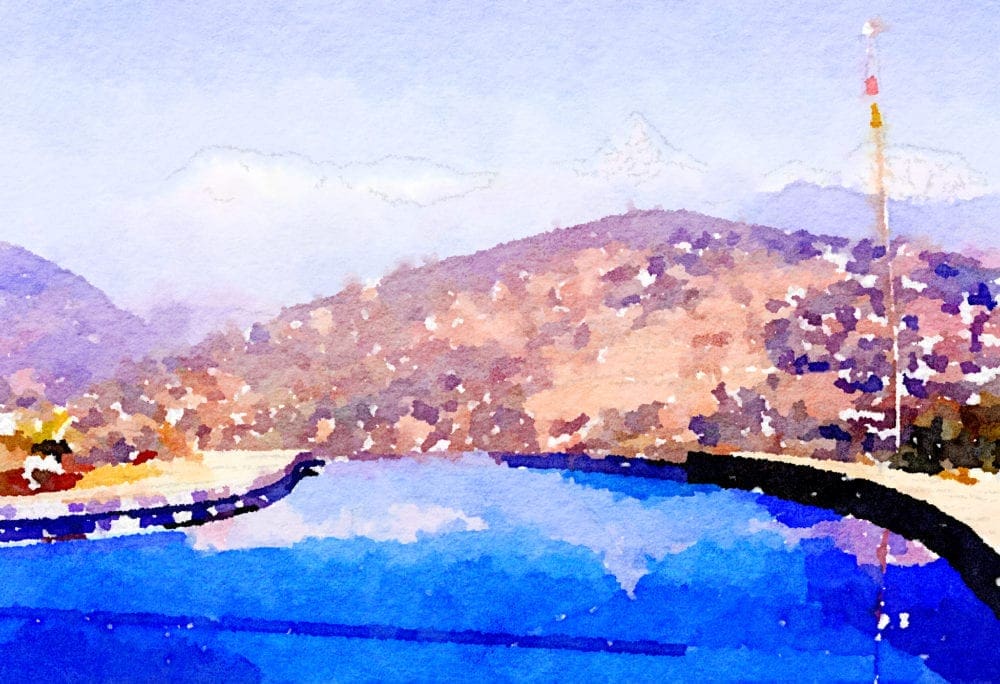 Setting off, from Kathmandu, on my five day tour of Tiger Mountain properties. in Nepal. First to Tigertops. I miss returning to hospital by an inch, as the taxi overtakes a swerving bus, which is, in turn, overtaking a truck. Cyclists topple like dominoes. Once more, with trepidation, to the domestic terminal. I am directed to climb through the luggage weighing - in station to gain entry through a curtain and security, to the departure lounge. The security guard is so impressed by my tiger postcard boarding card she forgets to search my bag or me. Yeti Airlines and stunning views skimming along the edge of the Himalayas, over green terraces stacked right up to the peaks, finally coming in to land over farmland and pointed haystacks at Megauly airstrip. Picnickers scatter as the plane bumps in. The terminal is a rattan hut.

Next, a very bumpy bus ride to the riverbank. Here we take a dugout boat ferry crossing. The boat is tipping badly to one side till one very large lady gets in. “That’ll sort it” says one American sotto voce and it does, but not before she nearly lands in the water. Then a jeep ride, fording another blue, blue river to Tigertops – a rattan three storey building on stilts, frequented often, I’m told, by royalty.

Lunch is served on a lawned terrace overlooking waving elephant grasslands and grazing spotted deer. This is followed by a visit to the elephant camp where eleven elephants are confined; they devour huge heaps of green stuff. We are instructed on the difference between Asian (not Indian) elephants and African and told the number of muscles in an elephant’s trunk (40,000). A tusker is in musk and is chained by all four legs so he can’t rampage through the camp as nature intended.

Now the elephant safari. Because of my status on the wounded list I am allocated an elephant all to myself and perch aloft, packed in with cushions. Two Americans, Jeff and Jonathan, sycophantically tell me I look like an Indian princess. The safari is great fun. More deer, birds and several rhinos. The mahout takes the elephant up really close until the rhinos (notoriously bad tempered because of their poor sight) take fright and we go lumbering through the elephant grass after them. We follow an armoured mother and baby for some time, eventually emerging along the riverbank. The elephant makes a wonderful swishing noise as it moves through the water and the peace as we sway along the banks and through the long grasses is tremendous. But no tigers.

Dinner is taken in a rondavel with a central fireplace, after a slide show commentary on the Royal Chitwan Park. The food is surprisingly poor, but I am gratified to find that I am now recovered enough to put away four margaritas. (After instructing the bartender on how to make them). I am hugely entertained by Jonathan and Jeff. The former is a painter, apparently of some celebrity and Jeff is a former broadcaster who owns a ranch in Washington State. They tell me that they are loaded, but Jeff is more loaded than Jonathan, so he flies first class and Jonathan only business class. So now I have met my American millionaire and am pleased to let him buy all the drinks. They are on a round the world tour – two days in Nepal, four days in China. However, they flirt with me both outrageously and competitively all evening – great fun. Predictably I much prefer Jonathan, the less affluent of the pair. He is less obvious and has gorgeous eyes.

Not a very good night. The sounds of people and the jungle permeate the thin walls and the alcohol reaps its effect. The rooms are lit with electrically wired kerosene lamps and are dim. I am very grateful for my two hot water bottles.

I can’t face breakfast but go with Jonathan and a guide for a jungle walk, this time praying not to see a tiger. There are fresh tracks though and deer, wild boar and more birds, very calm and yet exhilarating. The Americans leave to go onto their next land, promising to email me my Princess photos. I am transported on my own individual safari to Tharu Lodge on the edge of the Park.

First, by jeep along the river, stopping to admire the slumbering crocodiles, mouths ajar, teeth glistening, draped on logs almost as if arranged specially for tourists. Then a half hour dug out boat ride, me and my escort of four, drifting along, through mini rapids, past eagles and more crocodiles; the elongated snout fish eating variety this time. Expanses of blue sky all around and again, extraordinarily peaceful. Another short jeep ride to the Lodge, this time constructed of two native plaster longhouses on a high riverbank.

I am the only guest, so all tours are individually made. To begin, an ox cart ride around the local Tharu village. The oxen are pure white, Indian and hump backed and determined to take the most erratic path possible, so we are in constant danger of rolling into the ditch. We lurch past a series of picture postcard rural scenes. It is rice harvest time and small oxen are driven in circular paths around posts to thresh the grain. The separated hay is pitched onto high ricks. Women and children squat with the animals round small fires and tiny chicks scatter, squawking as the cart rattles on. Past a patch of sugar cane where a recalcitrant rhino is hiding, to the terror of the villagers, and school children reciting the relentless chant “Good bye – gimme pen”. I wave slowly, like the Queen, as we parade along.

Now another elephant ride, just me and one elephant. It is very uneventful, with the animals spotted count totalling zero. Dipendra Kali, the elephant, provides the entertainment however, rebelliously stopping to eat at every opportunity, pulling at the vegetation with her trunk and trumpeting loudly when punished with a prod of the mahout’s stick.

Later, about twenty villagers dance just for me. I plead my scar as an excuse for not joining in and eat dinner at tables placed round the central fire with Amy, the manager and Andreas, the farm manager and his wife. Amy is telling of a Nepali who has been found after having been savaged by a rhino and left to lie outside all night. She has arranged hospital care but is having trouble trying to get the locals to participate. Apparently, at forty he is considered too old to bother with.

An individual early morning call, a Nepali playing the flute outside my door, armed with a cup of steaming lemon grass tea. A Jeep ride through more rural scenes to Nagarkota, a bustling busy dirty town, to catch the Green Line bus to Pokara. We drive along riverside precipices, but I am delayed by two hours, as the intersecting bus does not arrive. Gradually, snow-capped peaks come into view. Another temporary hitch as I am deposited in a car for the wrong hotel, and then, the most terrifying, jolting jeep ride so far, up the mountain, to Tiger Mountain Lodge. It is perched a thousand feet up, steep terraces and the valley dropping away below. Vultures swoop ahead and the mountains are shrouded in mist. I hope the view will not be as elusive as the tigers.

My bungalow faces the peaks and has its own mountain terrace. there is a delicious dinner and rum punches round the fire with the delightful Guest Relations Officer, Els, and her KLM pilot husband. There is also an American medical student travelling with his Aunt (shades of Graham Greene). “Have more butter Tucker”.
“Drink your coffee Tucker”.

Fishtail and the Annapurna Range, Nepal

I awake at 6.30 a.m. and catch a glimpse of mountains from the bed. I stagger outside, with a blanket wrapped round me, and am captivated. The mountains are slowly revealed in all their glory – Fishtail, Annapurna, and other 8,000-meter peaks, immense and awe inspiring. I am too excited to go back to bed and dress quickly to ascend to the Lodge and take in the view of the whole range. I devour chilli omelette and potato cakes while the whole valley unfolds beneath me. Then out to the swimming pool, reflecting the peaks in the blue water, to write my Christmas cards in the sun. Tranquil and again, very surreal. Fishtail is sacred and has never been climbed (officially) - the government refuse to give any permits

In the afternoon to Pokara in the Land Rover, just me and my guide – I’m getting used to this. Pokara is dirty, sprawling and unimpressive. First, a trip to an equally unimpressive waterfall. Then the Tibetan refugee camp. Women are knotting carpets in the dim, creating incredibly complex patterns. The inevitable visit to the saleroom follows, made bearable by the plethora of cheap Christmas presents available. On to the lakeside – a little dingy with strips of fruit festooned juice bars and trekking shops as well as the usual craft stalls.

Dinner with the pilot, Kees-Jan, and an American NASA aeroplane wing designer. The latter admits that he is terrified of flying and Kees Jan agrees that this is a perfectly reasonable state of mind. Now I’m really looking forward to my trip home. Also at the table are Charlie and his retired colonel father. Charlie is going off to Chitwan to play elephant polo. Kerosene lamps light the way back to the cabins.

A wake up call at 6.30 a.m. to watch the sunrise again. this time down to the helipad to watch the rosy glow creeping over the mountains. The sun, rising behind me, changes colour rapidly from red to yellow to white. The first time the sun has really looked to me like the huge fiery ball that it really is. I sip tea on the terrace, to take in the view until the very last minute before the flight back to Kathmandu.

Over the river on a precarious suspension bridge “One vehicle at a time”. Below a collection of buses is standing in the water to be washed. More motoring manoeuvres through flocks of sheep, grazing buffalo and oncoming motorcycles to the airport. Security interview conversation here:

Sign in airport lounge “You are strongly prohibited to spit elsewhere spittle pot”.

Another fantastic flight along the edge of the snowy Himalayas. Mountains as far as the eye can see in both directions.

I am met by Laxmi’s husband, Prakash and whisked back to Sandj’s house. there is great excitement as Maoist terrorists have threatened to kidnap children at the school. It has been shut for the next few days and may not be able to open until after Christmas. Politics here is also becoming exciting. All the hotels will be shut from Sunday onwards, as the staff are going on strike.