Barbara and I decide to travel to Malaysia on a last minute whim. We just book a flight to Kuala Lumpur and then another to Kota Kinabalu, in Sabah, a state on Borneo and back, when we get there. Then we realise we can visit Singapore as well, get all excited and alter our return booking.

Barbara has friends living on the outskirts of Kuala Lumpur. We are soon talking about KL and KK, as they are known here, like proper ex-pats.

Kuala Lumpur, the Capital of Malaysia 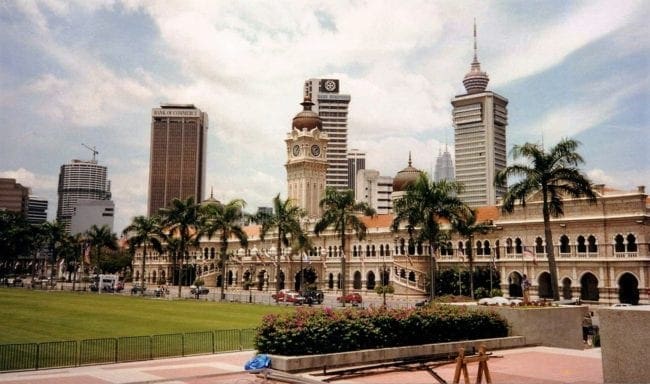 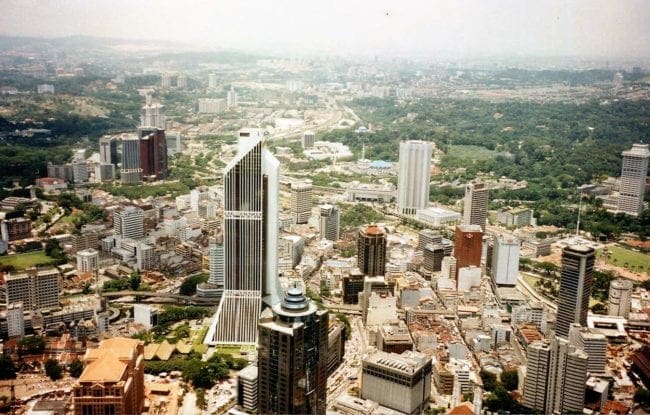 Kuala Lumpur is the capital city and the cultural, financial, and economic centre of Malaysia. It is also home to the Parliament of Malaysia, and the Istana Negara, the official residence of the Yang di-Pertuan Agong (monarch of Malaysia). They relocated some of the capital 's functions to purpose built Putrajaya, a little way to the south. Kuala Lumpur started life servicing tin mines in the mid nineteenth century.

Kuala Lumpur is, apparently one of the leading cities in the world for tourism. I'm sorry, I don't understand why. The Petronas Towers dominate the city. Once you're up there on the walkway joining the two towers, you can see all there is to see. It's not very exciting. A few scrapers and oddments of buildings, malls, mosques, older shop house blocks and out to the hills.

Shopping, yes, that's a different matter. There are huge malls here. And plenty of open shops, lining the main streets. A surprising number of these sell shiny hair accessories. And there are street markets and stalls, everywhere, of course. 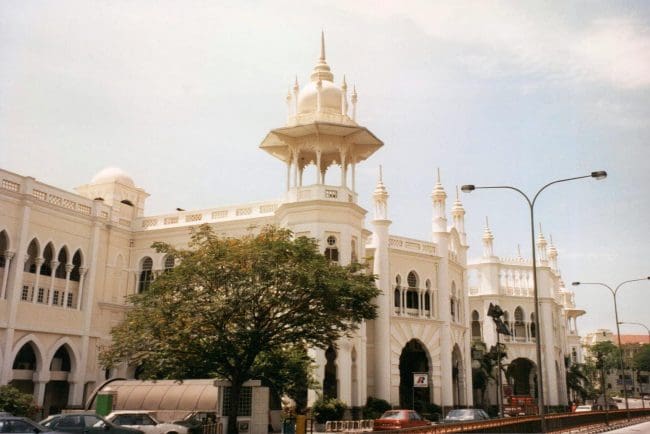 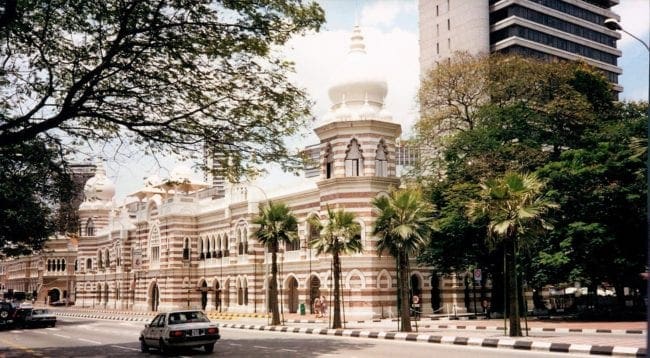 The most interesting sights, other than the Petronas Towers, are the colonial heritage buildings. Probably the most well known is the Moorish style Sultan Abdul Samad Building, a late-nineteenth century building in front of the Dataran Merdeka (Independence Square) It was the headquarters of the offices of the British colonial administration; then, it was known simply as Government Offices. After Malaysian independence, it was renamed after Sultan Abdul Samad, the reigning sultan of Selangor at the time of construction. It has since housed various Malaysian government offices.

The National Textile Museum is eye-catching with its stripes. and even the Railways Station is splendid, with Indian style domes and cupolas. There're also numerous other museums, some temples and plenty of mosques. Islam is the state religion and the most well known mosque is the blue roofed National Mosque of Malaysia (Masjid Negara) 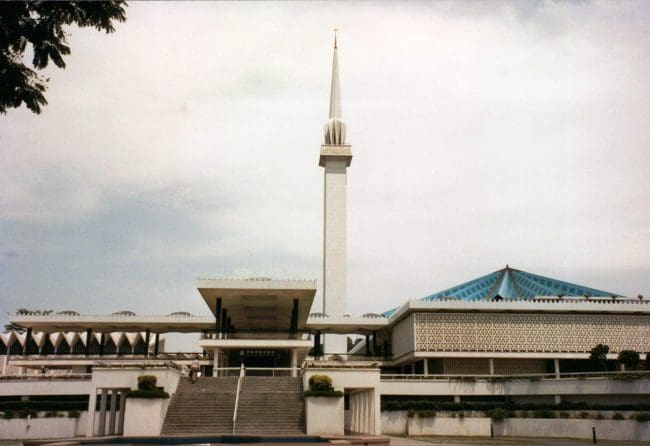 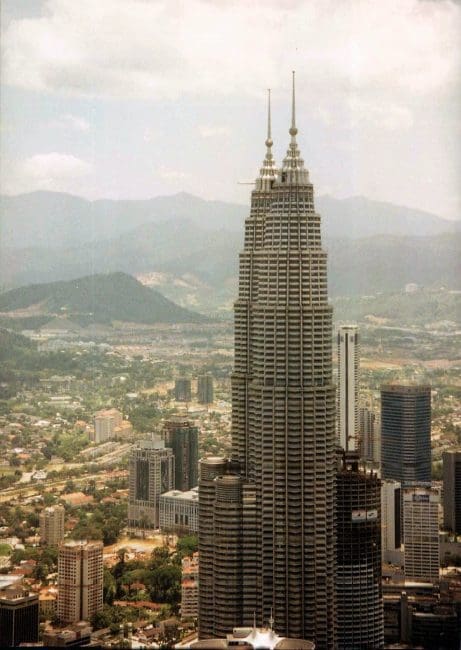 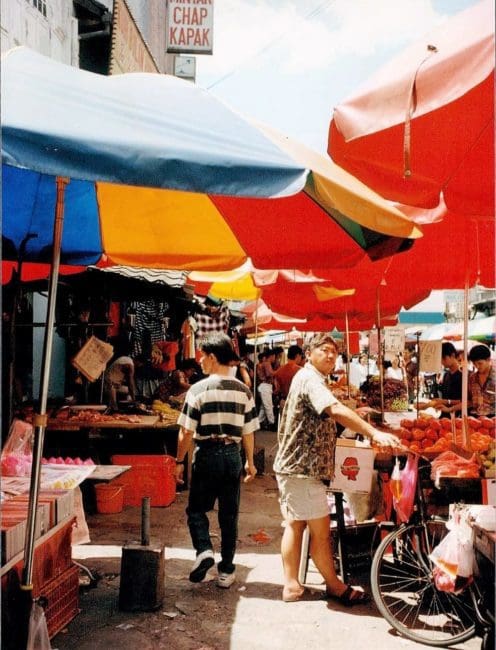 Malaysia is unexpectedly orderly compared to much of Asia. And very British - roads, signs. language. Kota Kinbalu is reached, without any problem and we find an affordable central hotel, without too much hassle. This is the capital city of Sabah, a Malaysian state, atop the Island of Borneo. There are plenty of locals willing to help us travel across the island of, on surprisingly comfortable and punctual buses.

But first we need to explore KK. It is an easy city to navigate and wander, observing life on the water in the stilt village and sampling the many eateries. 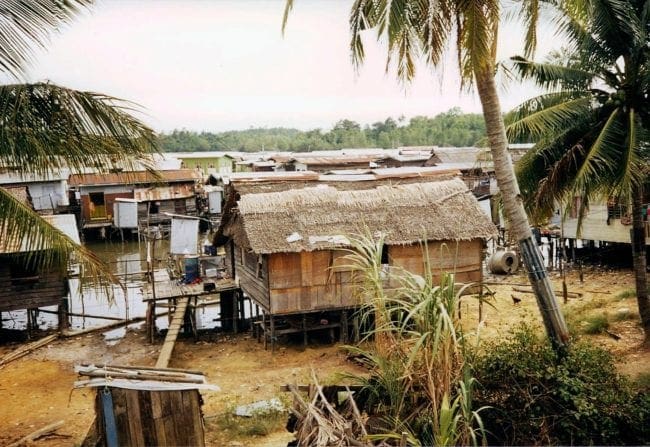 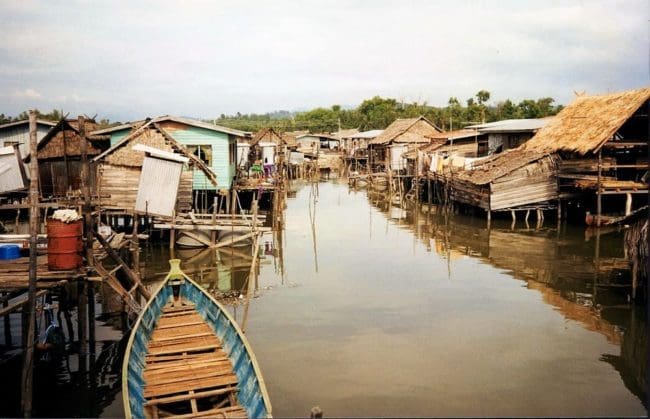 KK is also blessed with the five nearby islands of Tunku Abdul Rahman Park (TARP). Two islands, Sapi and Manukan Islands are accessible by ferry (only 15 - 30 minutes) or other private boats from the waterfront. With their picture perfect beaches, picturesque, casuarina trees and azure water, they're ideal for snorkelling, sunbathing, and swimming, or just doing nothing. Sapi is the least frequented of the pair, so we are well organised, and take a picnic lunch with us. Monkeys creep down from the trees and steal it while we’re in the water. The beach is strewn with empty bags and peel and we are exceedingly hungry by the time the boat turns up to fetch us home. 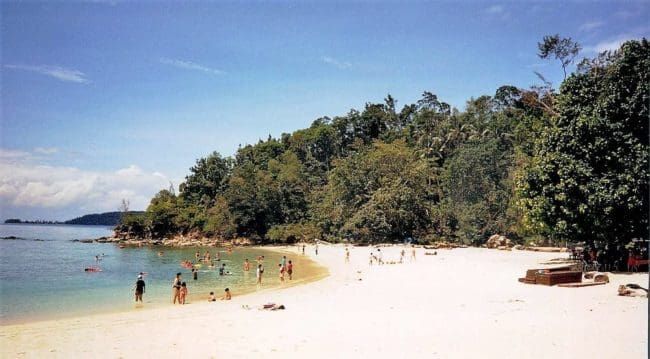 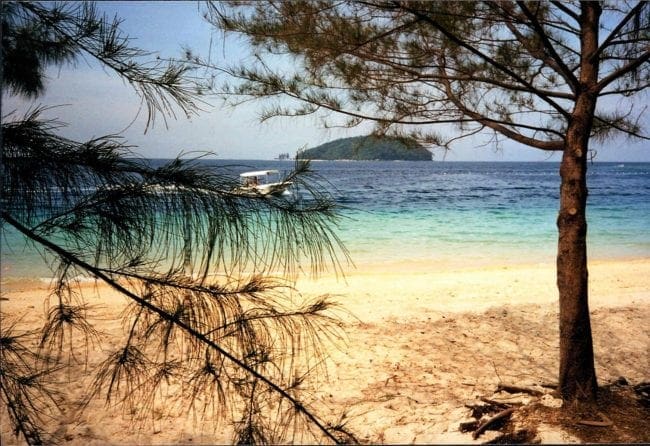 Then, we 're off touring. Kinabalu Park, ninety miles away, and home to Mount Kinabalu, the highest mountain in south east Asia. is a must-see. It's one of those compulsory, get up before dawn climbs. To escape the heat and view the sunrise. Barbara is appalled at the idea. Especially as we are told we need a guide and may suffer altitude sickness. (4,095 metres). It's a very prominent point, rising steeply from sea level. So, instead, we walk up some way savouring the jungle paths. It’s still the wet season and it’s too misty to enjoy much of a view, in any case. 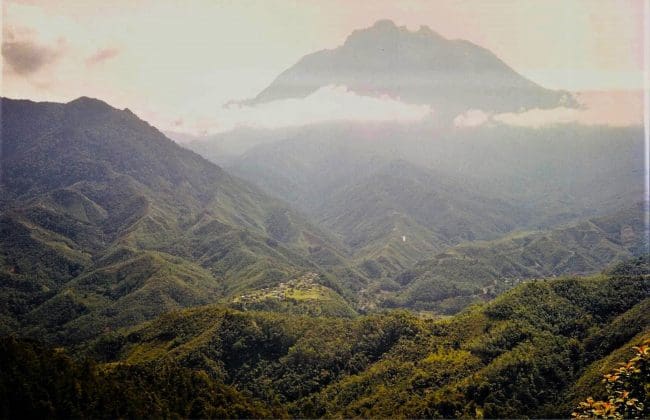 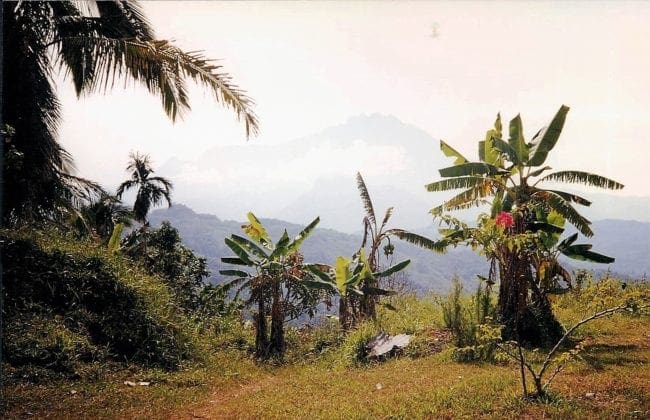 Now, crossing the island of Borneo until we are almost on the east coast. Tiny Sepilok village is famous for its Orang Utan Sanctuary, where abandoned or orphaned orang-utans are rehabilitated and then released back into the wild. Everyone wants to see an orang utan. There are platforms where they are fed (so we can see) and the endangered great apes dutifully swing along lines strung through the trees, perform acrobatics and queue up for fruit. There are three species of orang-utan, found only in Borneo and Sumatra (Indonesia). They are the heaviest animals to live in trees, and they build nests. 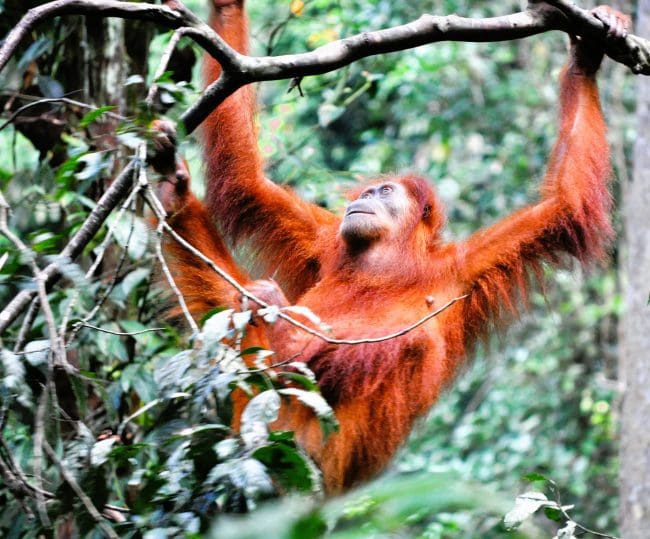 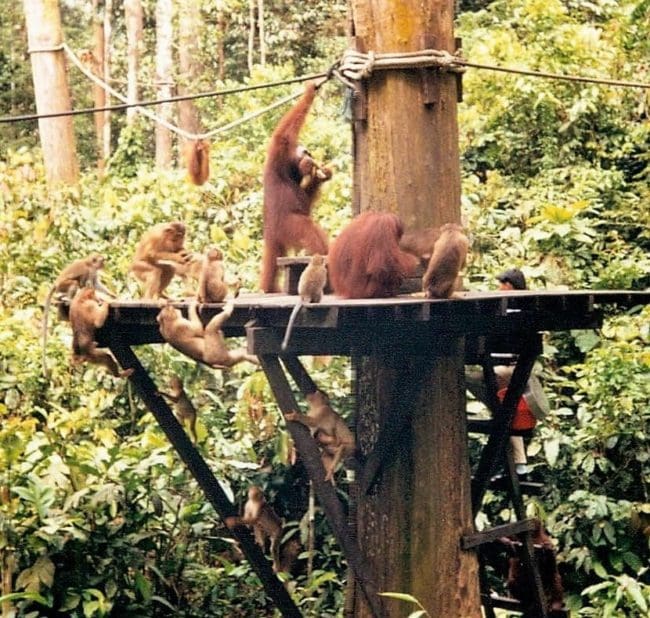 Sandakan is the obvious stop over after seeing the orang-utans. This port is also the obvious jumping off point for Selingan Island, home of the hawkesbill and green turtle centre. The boat leaves at 10 and takes an hour. It returns at seven (ouch) the next day. Our hotel is near the beach where we have easy access to the turtle sanctuary. Both Green and Hawksbill turtles visit Selingan Island throughout the year to nest, in different seasons.  We're here for the hawksbills (February to April).

Selingan Island and Saving the Turtles of Sabah

Female turtles claw their way up the beach searching for a nesting site at night. If they are disturbed in the process they just run away, back to sea. They dig a deep hole, with their flippers and deposit anything 40-200 eggs. Finally, she tries to disguise the nest. before returning to the ocean. It's hard work. 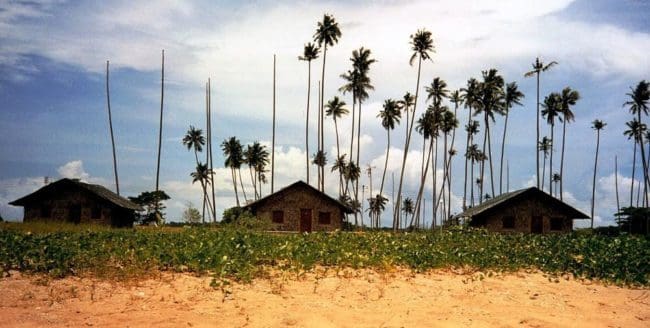 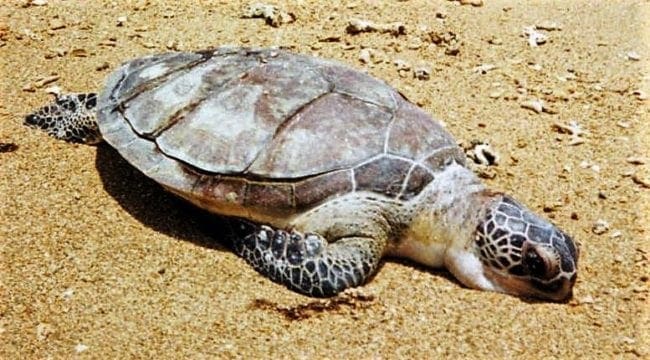 The Sanctuary workers remove the eggs, tag and incubate them in special pits. That takes 50-60 days. Still very tiny, the hatchlings are released back into the sea. We help turn buckets of tiny turtles, legs waving, onto the sand, and watch as they scuttle towards the sea. It’s heart-wrenching.

We run around waving our arms hoping to ward off any predatory birds and then watch them struggle into the waves. Very few survive according to David Attenborough. Only 1 in 1,000 escape the predatory birds and fish. Our guide tells us that the sanctuary‘s job is to guard the nests, remove the eggs after they’re laid and protect and incubate them. He adds that the employees are often offered hefty bribes to sell the eggs. So frustratingly sad.

Back at KK, we sample cocktails by the glitzy beachside hotels we can’t afford to reside in.

Singapore next and then back to KL, to fly home.