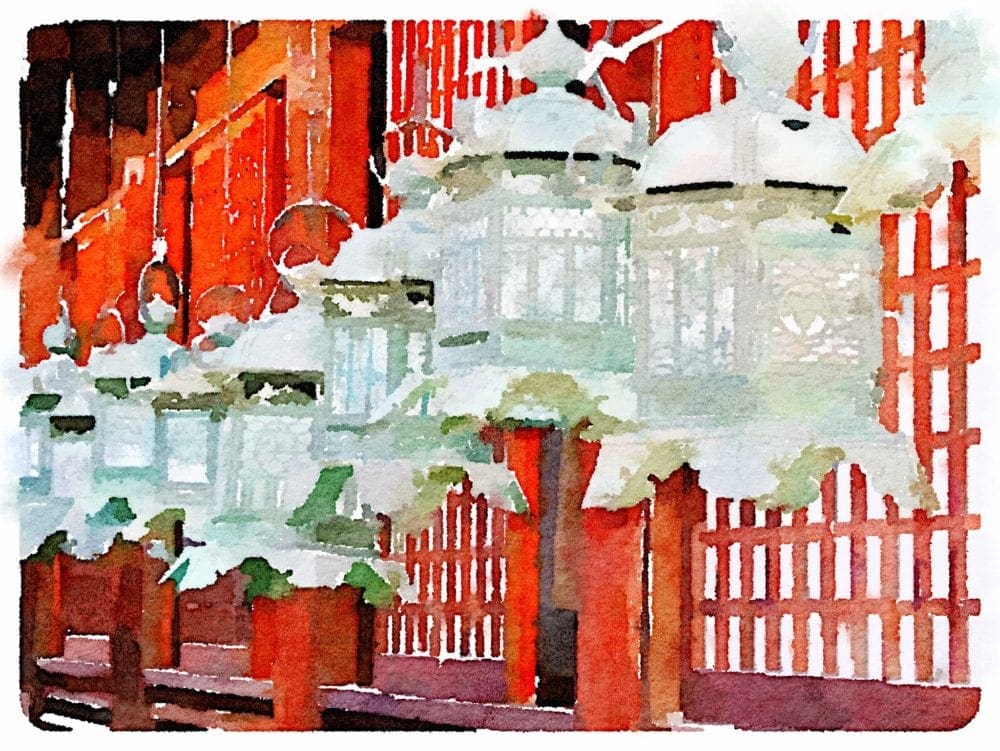 Japan is quite frightening when you first arrive - all modern and overwhelming and Oh My God how do I know where to go? Until you realise there are little English signs in most places under the Japanese script. And the locals, though shy and blushing, are helpful, when asked. I've acquired a first day guide to Tokyo on the plane on the way out. he's called Richard and he's exceptionally good looking. I forget to take any photos.   Tokyo is huge and it takes forever to get across the city on the metro. Everyone sits very quietly. Some have their eyes shut. I wonder if they’ve fallen asleep or if they are meditating. It's all fascinating, especially Akiharbara, the literally pulsating electronics district, where huge stores packed with goods compete for custom via song and dance in the street. I buy a very cheap memory card for my camera.

This is a group trip. It’s run by an Australian company so unsurprisingly most of us are Australian. There’s a newly married English couple, Sara and Craig who lug a huge Miffy rabbit everywhere.  I’m sharing with another Sue, from Melbourne. There's thirty-ish Peter and  an older Australian guy, Lindsey, who seems very frail and perpetually unhappy. All he does is frown and complain.

We travel by train everywhere – everyone does., queuing two by two on the platforms as instructed. Sensibly, the seats rotate so you always get to face forward.  Miffy even gets his own seat on the train. (It was a doting husband present.).From the skyscrapers and hustle of Tokyo to first, the damp mossy shrines and waterfalls  at Nikko, we're catching the edge of a typhoon. The river is rising, the shops are flooded, we're all soaked and marooned and have to recover in an onsen (hotspring), followed by meatballs and rice. We're staying in a riokhan (traditional inn with futons, paper-thin walls and tatami matting on a very hard floor.). We're even given cotton kimonos to wear.

Next, lakeside Hakone. Here it's goregous weather and we can see the iconic perfect  cone of Mount Fuji.  We take a scarlet pirate boat across the lake to another riokhan. This one has an outdoor onsen. And there's a gondola lift up the side of the mountain, over the sulphurous fumaroles of classic Fuji. Enterprising vendors are boiling eggs in the mud.

Back to Nagoya and then Takayama,  narrow streets lined with wooden merchants’ houses and a sprinkling of  tiny museums. Men in black singlets and patterned bandannas ferry the tourists around in rickshaws. It's raining again and we're drenched at the morning market.

Then Hiroshima and a sobering visit to the Peace Park, with its domed memorial. I’ve quickly got to grips with sushi which is melt in your mouth delicious. Now I can navigate both the conveyor belts and the tiny corner bars where the fish is carved by the chef, dressed in appropriate sashed garb. Anything not just out of the water fresh is shunned, though some very odd and slimy things are included. There are good hot dishes too- the stone cooked tepanyaki, bread crumbed katsu and various broths and curries, but I’m determined to eat sushi at least once every day. In the evening we're disco dancing to the Proclaimers.

The Shinkansen (bullet train) to Miyajima Shame the train isn't a bit more atmospheric, it’s very comfy, but there’s no real sense of speed. As we are waiting we see Nozumi go by. That's the really fast (and expensive) one - the whole platform trembles as it shoots past.The famous Tori gate in the bay could do with a lick of paint. Swiss Bettina, Megan and I find a Hello Kitty karaoke chapel, complete with stained windows and spend the evening  singing badly. Only in Japan.

We visit Shogun picture book Himeji Castle on the way to Kyoto. Sara and Craig argue about what to do with their rabbit. Miffed about Miffy.

This is a great city. Temples and shrines abound, though I've probably seen one too many of those now. Fantastic Zen gardens (of course) turning autumnal; the classic Japanese red maples are lovely. Then a fascinating craft centre, the Philosophers’ Walk along the canal, up the modern station tower, (10 escalators in a continuous row), Nara for more temples and shrines and deer, round the Imperial Palace (the emperor doesn't live there any more - too busy in Tokyo) and another castle with lots more gold on it.

More sushi; I’m not bored with it yet and it’s cheap in the convenience stores AND I think I've lost weight! Finally, another onsen (no clothes and a string of thermal pools, one of which carries an electric current) with the local mafia wives and Megan.

How to Deal with Complaints

Lindsey maintains his complaints throughout. Eventually, when he is in full throttle as we are trying to traverse a busy pedestrian thoroughfare, leader Megan deals with him in very Australian fashion. “Here’s a token, go call someone who cares”. I bid goodbye to the group over tepanyaki , onamayaki and hot sake. One more day in Kyoto with Sue, my roommate and then I navigate my way back to Tokyo on my own.  A last trip on the Shinkansen. Japanese signs don't seem nearly as intimidating now.

Make a quick visit to the temples in Ueno Park - it’s an effective picture with the scrapers behind, followed by  a  very good (and very expensive) Italian meal with Richard. It seems a funny way to finish a trip to Japan, but I let him choose. And the world is now a very different place. We have watched 9/11 unfold on Japanese TV.  I  feel very flat, leaving the group and setting off on my own again, unsure even whether there is  a plane to catch. But Brisbane here I come.