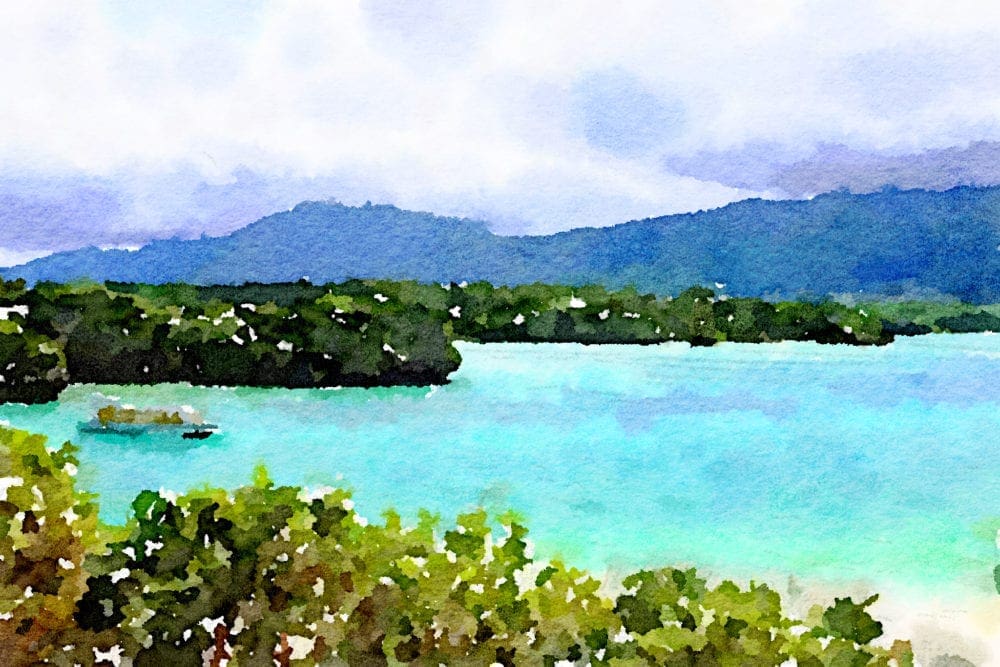 I'm in Ishigakijima, one of the Yaeyama islands, Okinawa prefecture. Basically, this is about as far south as Japan goes, which is quite a long way. Japan here doesn’t seem to be as high tech as I remember it to be but that was 15 years ago. Yes, everyone is toting their gadgets but the stores are utilitarian and piled high with oddments, plastic toys and confectionery, which is annoying, as I've already lost my universal electronic charger. I left it on the last of the three planes I travelled on to get here. It took two days minus the time difference of eight hours and I was too drowsy to notice. The Japanese man next to me didn't sleep well either. I accidentally kicked my bag onto him during the night and he threw it back shouting ''Over there!' Surprisingly un-Japanese as everything here is so calm.

There's also more English script around than I remember, which is helpful, as very few folk down here in the sticks speak English. The hotel manager was really surprised to see me. He says westerners don't come to visit these parts. The only Japanese word I could remember before I set off was yes. It's already been pointed out to me that no might be a safer option.

I feel like a gentle start food wise so I go for the Chinese restaurant. The smiling waiter brings me pickled jellyfish as a surprise appetiser. And so it goes on. One of the strangest meals I’ve ever eaten, everything is either slimy or bitter or spiky. It seems that Japanese Chinese food is not remotely like English Chinese. Or Chinese Chinese for that matter. And OMG is it expensive. The set menu is £40 and the man at the desk told me that this was the cheap restaurant.

Now a barbers’ quartet of waiters have brought out a ‘cake’ and are singing happy birthday to the family group at the adjacent table. The waitress says it's their wedding anniversary....

Back in my room - it's like a fridge the air conditioning is so over zealous. The bath plug is spherical and the toilet, with its gadgets and heated seat, is the warmest place to be. It's quaintly called a shower toilet.

This was designated my blossom tour as after Ishigakijima I'm travelling north via Tokyo and my next stops are all arranged around Japanese flower festivals. However, I’ve had to extend the title as I’ve discovered that Japan is involved in a skirmish with China over some of the small islands close to here. The Japanese fishermen have been chased out and Ishigaki harbour is bristling with coastal defence vessels. The newspapers say that tourists are staying away because they don’t want to get involved in the fighting. And my next stop after Japan is planned to be North Korea. Donald Trump has sent an aircraft carrier fleet, the Chinese are massing on the North Korean border and the Japanese are drawing up plans to evacuate their citizens from South Korea...

Taketomi - in the rhythm of the day

I wake with appalling jet lag and it takes sometime to orientate myself (see what I did there) but the sun is recalcitrant and I decide to step out and explore. I manage to acquire a ferry ticket and arrive on the tiny island of Taketomi. Well I thought I was disorientated before, but now I'm completely discombobulated. Everything is signed in Japanese script and there are a crowd of men with vans and unfathomable chalk boards. Some pictures would be helpful. I eventually find a wall map and work out how to walk into the central village, which takes ten minutes. There I hire a bike and obtain my own map, which I can't read. And I discover that the vans were there to transport tourists to the bike hire shops.

The island is charming and well worth the trip. It is remote and traditional with red terracotta roofed houses and grey stone walls (these are the ishigaki of the island name). Bougainvillea and hibiscus spill over them in rampant abundance. Stone lanterns are pleasingly littered around and pop eyed baby dragons and lions roar from the tiles. Delightfully atmospheric. The other local transport possibility are the water buffalo carts. The huge beasts lumber along surprisingly rhythmically, heads swaying and the Japanese passengers vie for inclusion in the photos I'm trying to take. The buffalo need little guidance as they traverse the narrow coral sand lanes. I wish I was as sure of my route. Fortunately, the Japanese are helpful and polite as finding my way and returning my bike to the correct shop involves stopping at least a dozen different people. My vocabulary has expanded to yes, no, hello, good-bye and thank you and I'm already bowing my head automatically with the best of them.

Taketomi is small, which is just as well as my first foray involves me emerging on completely the wrong side. Eventually, I visit a beach famous for minuscule star shaped shells (I am happy to view the findings of others) and two other beaches renowned for their views over the reefs. The water is not emerald, as promised, today, but it's still pretty.

‘Why go somewhere if you can't buy anything?’

Back at the port I wander in search of replacement chargers and find the expected warehouse with every possible gadget known to man in every possible shade of pink. I note that the Japanese are still keen on Hello Kitty. Ishigaki 'city' is very different to Taketomi and more the modern Japanese norm, a cluster of hotels and shops. I've already learned that the Japanese, like the Chinese, love shopping. ‘Why go somewhere if you can't buy anything?’ someone says on the boat. I can't work out how to get back to the hotel but a kind young man gives me a lift in his van. No charge no strings. Well that wouldn't happen in England.

Dinner tonight is ostensibly a western buffet. But it's Japanese Western. Sashimi, rice curry and various stir fry. And if my bedroom is a fridge this restaurant is the freezer.

I'm supposed to be snorkelling all day, lunch included. I'm hoping the trip will involve views of more of Ishigaki as there are supposed to be mantas and some beautiful bays. But the dive instructor tells me that they aren't running day trips this season. And we head out for Taketomi Island…..

The reef is sadly all but dead but the fish are pretty and there are some gleaming shoals to swim with and a few clownfish spats to observe - Neemo re-enacted. We have wet suit issue (I’m grateful no photos are taken) but even so the water is unpleasantly cold. It's still cloudy and early season and it doesn’t help that the instructors are very professional in their approach and want to keep everyone together, so it's slow going. I reflect that a whole day might have been challenging.

There is a triathlon taking place in town and we weave our way through the runners back to the hotel where the sun has made a welcome resurgence. There are signs next to the pool forbidding people with exposed tattoos. (I read that body marking is associated with the Mafia here and is generally frowned on.) A sun bed seems a good option for a snooze. Except that a group of triathlon participants has arrived and are ear splittingly exuberant. They clearly haven't tried hard enough if they are not exhausted. And I note that they all have their race numbers stuck on their forearms. It's a shame the tattoo rule hasn’t been applied.

The hotel is very big on weddings. It has its own chapel on the shore, complete with stained glass. A considerable portion of the main wing is devoted to accoutrements. There’s a bridal suite to change in and a bridal salon to choose all the clothes

Lunch is again astronomically priced. Fish and chips turns out to be three bread crumbed and deep fried fingers of fish wrapped in ham and mint, accompanied by a mound of tortilla chips. I've discovered that the convenience store in the hotel sells beverages at one third of the price at the pool bar. So I run upstairs to buy my refreshments.

I’ve also discovered all the local shops and almost succumb to MacDonald’s as an easy option, but I'm deterred by the possibility of burger with more corn chips and cut price sushi from Hotto Motto (great name) prevails. When paying at the stores here you have to put your money into a little plastic dish and the cashier very painstakingly counts out all the change to ensure that it is correct. And doesn't have to touch you. The more upmarket places like the hotels utilise a leather version on which to pop your credit card.

I've been told that Kabira Bay in the north is incredibly beautiful and I'm up for a little more adventure, so I hop on a bus. It's all very civilised. You remove the proffered ticket from the little machine as you get on and an electronic board tells you how much each stage travelled so far has cost, running taxi meters for each passenger at the same time. The unfolding panorama as we traverse the island is typically tropical, lush green mountains surrounded by banana, sugar cane and pineapple plantations.

Finding the way to the sightseeing spots is a doddle as I just follow the streams of cruise ship passengers emerging from the lines of coaches and the bay lives up to its reputation. A host of leafy small karst islands ringed with white sand and floating in water that really is emerald green today. Well, in snatches. It's windy and dark clouds are scudding across the bay, but there is enough intermittent sunshine to get the idea. I pile onto a glass bottomed boat with one flurry of tourists for the view from the water, as well as a look at some blue staghorn coral and a few fish as a bonus.

I will probably regret saying this but travelling alone with no Japanese isn't that difficult, as everyone is so helpful. It's not all sweetness and light however. Japan isn't as modern as anticipated in other ways. This is still definitely a nation where women are secondary to men and are expected to defer to them, and it is women who do most of the helping. The men like to operate the buttons in the lifts, especially the close the door one. They race to hit it first. It’s also a place where smoking remains the norm. Cigarette stands are situated next to most of the general store and supermarket cash desks. The stations and airports all have glass smoking rooms and it’s another race to pile into them as the passengers disembark from trains or planes.

The forecast is confident it's going to rain all day tomorrow so I postpone packing and faff for some hours before opening the curtains and discovering that, perversely, the weather is glorious. It's been hot overcast and humid so far. I've given up trying to style my hair - bushy is in. The chapel bells are ringing. There must be another wedding imminent.