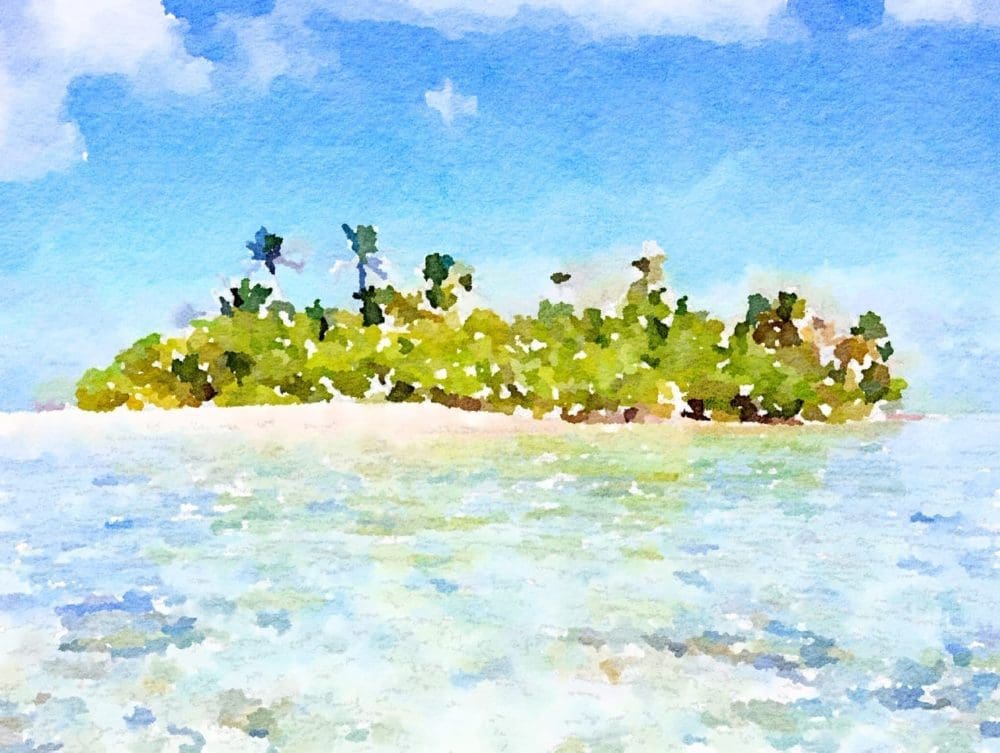 I've flown into the Cocos Islands from Perth via Christmas Island. A quick bike tour down the side of the runway, to the southern tip of West Island, where there’s a gorgeous beach, islets floating beyond, in shallow glimmering water. The crabs here are mini robots, fast running, with vertical square heads and revolving eyes on top. Tiny reef sharks are so close in I can see the tips of their dorsal fins above the water.

All the Cocos Islands, except one are in the southern atoll and I’m off to explore that on a motorized canoe tour. It’s an idyllic afternoon scudding round little palm topped dots. I’m allowed to be a princess, as Anthony from Perth does the necessary with the little outboard and we follow a rainbow of bright bobbing plastic boats. Sonal and Chris and Donna and Barry from my lodging have come along and there are more folk I recognise - they were on the plane from Perth.

We snorkel in a channel running half way round one island. It’s a natural water park – the current wafts us along the chute, past all the fish who are lurking in the overhangs and then catapults us into the ocean on the other side. Very clever. There are a multitude of garfish (under the surface), clams and sea cucumbers, as well as more small sharks and a couple of turtles. The current is so strong, it’s like watching a movie in fast forward and I’m hanging onto clumps of rock to try and take photos. We walk back the few metres across the island.

Julia and Tony are celebrating their 48th wedding anniversary and the next stop involves champagne, curry puffs, hordes of hermit crabs (I’m sure they can smell food, like robber crabs) and clouds of ravenous mosquitoes. (These can also smell a meal).

We meander round the atoll and  take a jungle walk to the highest point in the territory, on another island, used as a lookout during the war. It’s 13 metres high - this would not be  a good place to try to survive a tsunami. Then we fill a sack with plastic rubbish that has drifted onto the beach (a dent in the heap) and return to our boats, more alcohol and more meanderings.

The trip is timed perfectly, so that we return as the sun is setting over the islets.

Next, I've planned a trip to Direction Island. You have to go on the special big ferry to Home Island, which then continues on to ‘Australia’s Best Beach’, Cossie Beach. But they’ve cancelled the ferry tomorrow (it only goes on Thursdays and Saturdays). The Visitor Information Centre (who actually seem to enjoy helping visitors here) say they can get me a glass bottomed boat trip that will include a visit to the beach, providing I can find three other people to join in. Sonal and Chris, from Christmas Island, are staying at the same place. And there’s an English couple, Donna and Barry from Essex, in the villa next to mine. Job done.

Today, the north part of the atoll in our glass bottomed boat, with  captain, Peter. The journey commences with a stop in the lagoon, for too much fishing, in my opinion. Chris and Peter enjoy themselves hugely, with the aid of some intricate red and white lures. They  land some large coral trout, which Peter excitedly explains, are a gastronomic delight.

We motor past some classic Robinson Crusoe islands with just one or two palm trees. Their names are less romantic - one is called Prison Island.

Next, Horsbrough Island, which is surrounded by huge green turtles and more small black tipped reef sharks. We snorkel at a coral bomie  with white tipped reef shark lurking and then at a wrecked nineteenth century barge,. It's an apartment home for golden yellow striped goatfish.

Peter promises more sharks on our way to Direction Island and bangs the glass panel with a brush. Nine sharks appear, the usual white and black tipped reef sharks and some larger, two metre grey reef sharks. They circle impatiently, waiting for the fish scraps that Peter feeds to them. Peter invites us to swim  with the sharks, but they are much bigger than those I have previously encountered in the water. I decide to abstain. My wound is also open again.

It’s a very good decision. Chris descends the ladder, putting one  leg into the water, and then appears again in the boat announcing he has been bitten by a shark. For a moment, I think he is joking, but then I spot the crimson fountain spurting out of his shin. Peter instantly springs into action, grabbing a towel a to fashion into a compression bandage. Then we head for the clinic on Home Island, where a sizeable proportion of the population of the Cocos Islands reside. Peter is bailing out bloody water. Direction Island recedes into the distance. I’m thinking it might be one of those places that’s just not meant to be.

An ambulance waits on the quay and Chris and Sonal are ferried off. Peter then announces that he will take the rest of us to Direction Island. we are to wait on the beach, while Chris is tended to. It’s a hollow victory. We’re all feeling shocked and sober.

This beach has been named Cossies Beach after Peter Cosgrave, a recent governor. It’s a classic arc of pale white sand backed by palm trees (not bendy), giving way to clear azure water. I’ll mark it eight, or maybe nine, out of ten. It's lovely but it's not the best beach I've ever seen by some way. So I decide to write my own list of Best Beaches in the World. More small black tipped reef sharks are circling in the bay and I’m not to be persuaded into the water again today (or maybe for a long while). Eventually, we return without Chris and Sonal. Barry accidentally does a Colin Firth impression, his white cheesecloth shirt soaking in the bow spray.

Peter returns for the patient later. It’s a nasty bite, sixteen stitches in a shark’s mouth crescent shape, and there have been Zoom conversations with medics in Australia. He was almost air lifted out. But it's now deemed not life threatening, provided he keeps it clean and elevated. Sonal and Chris have another four nights in the Cocos Islands and Chris will be confined to barracks for all of that time. We’ve booked dinner at Maxi’s restaurant tonight (she only opens Thursdays) and she cooks the coral trout for us. Sonal and I ferry some up the road to Chris. It’s delicious.