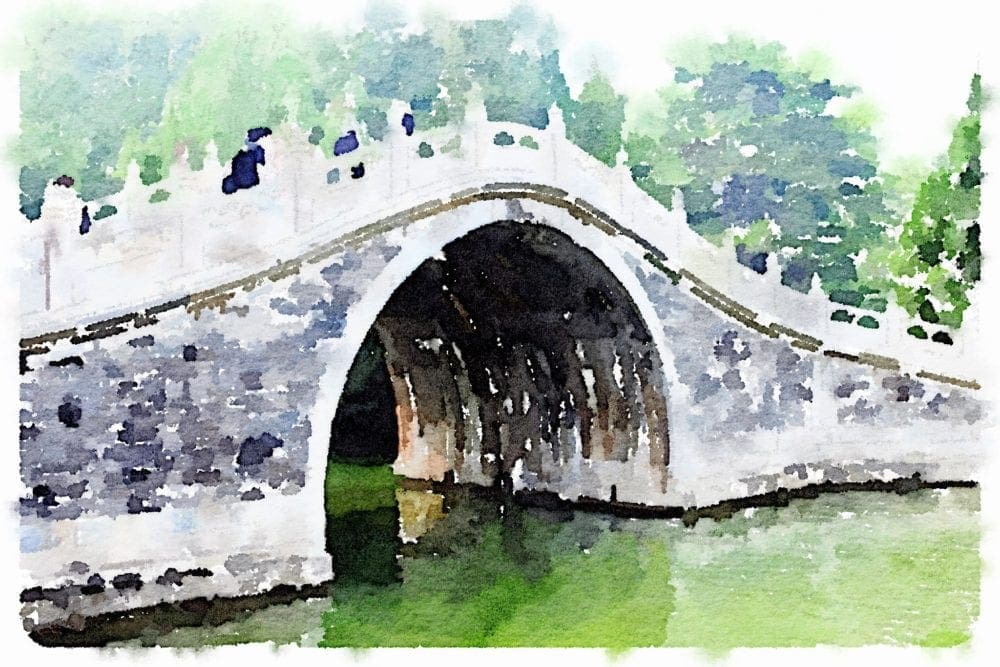 July 2016 - Beijing has changed a lot since the nineties

The nine million bicycles of Beijing have dwindled considerably. There are occasional  ranks of shiny Boris style bikes and at least nine million cars instead, probably more, as Beijing has a population of 22 million. Whilst we are on numbers it is one of the oldest established capital cities in the world and it has seven UNESCO World Heritage Sites – the Forbidden City, Temple of Heaven, Summer Palace, Ming Tombs, and Zhoukoudian, as well as parts of the Great Wall and the Grand Canal.

I've flown in from Japan. Beijing is still chaotic and difficult. I have an atmospheric and charming hotel in the alleyways of the old city. It feels authentic and quiet around here; there are wooden temples decorated with the typical red globe lanterns and little workshops. But when I venture out to revisit some of those heritage sights I’m pushed and shoved by people teeming ant-like in and around all the buildings and walkways, umbrellas held aloft. The teeming is accompanied by spitting and loud spluttery gargling reminiscent of a conversation between Bill and Ben. The locals are struggling with the weather as well as me. It’s almost unbearably humid. The forecast says ‘sunny’ but everything is shrouded in grey smog. I’m told there is a three week sauna every year and this is it.

Tiananmen Square still astounds with its vastness and the galleries and party building lining the sides are still impressive. But the atmosphere has gone. The square is sanitised and has manicured flower beds. No more kites and kite flyers. My middle aged guide shows me black and white photographs. He was here representing his school for Mao’s funeral in 1976. My guide says the kite sellers were secret police anyway.

Obtaining entry to the Forbidden City - officially known as the Old Palace Museum – isn’t easy. There are thousands of tourists and winding security queues all around Tiananmen Square. Once bags have been checked and persons scrutinised there are still more crowds inside waiting for entry, tickets and other group members. Once in, despite all the discomfort, my tee shirt is sticking to me, I can’t help but marvel once again at the colourful carving and intricate layers of palaces.

The major sites are spread out and the traffic makes sight-seeing a slow business. My guide talks to the driver in Mandarin most of the time. Nevertheless, the Temple of Heaven pagoda is beautiful, as far as I can tell, through the murk.

The Summer Palace is much more comfortable. Gardens cling to the edge of a lake with stone Willow Pattern bridges and drooping trees. There are some amusing ‘English’ explanations – ‘when the Japanese came there was a puppy emperor’.

I can’t face traversing the crowds back to the old city, and besides I’ve walked a long way. So I opt for what seems an easy option - an electric rickshaw. Instead it’s a near death experience as he weaves in and out of the traffic, clearly labouring under the illusion that he has right of way, even when we circumnavigate to stop off at a chemist and face the oncoming traffic head on. It soon becomes apparent that he has no intention of taking a direct route to the hotel. I’m unsure if he doesn’t know of it or is just trying to rack up the bill. Needless to say he requests an exorbitant amount when he finally does set me down. Well away from the tourist police.

The airport is predictably difficult to navigate. I’m directed to three different counters for check in before I find the right one. I can't access airport Wi-Fi. It won’t take my phone number because it’s not a local one. The machine won’t scan my passport. The plane is delayed because of bad weather. Grrrr

Finally, in Beijing the taxi drivers queuing at the airport refuse to drive me to my hotel even though I have the address written in Chinese. It seems they don’t know where it is. I do, well roughly, I’ve stayed there before and it’s very pleasantly characterful. But I ‘m unable to tell them that. Finally, one man with a GPS phone agrees to take me. However, it’s dark and the streets in this old part of town are narrow. He attempts to abandon me with my bags at the end of an alley. I know we’re in the right area but I'm not sure exactly where and I don’t relish wheeling my case around trying to find it. There is an impasse as I withhold payment and eventually I'm rescued by a porter from another hotel who gives directions and I am deposited in the correct place by a now very surly driver. He doesn’t offer me any change.

I'm not sure what it is about me and China but it’s always problematic. I'm flying from Fukuoka to Beijing and even the Japanese have abandoned their good manners before we’ve left the airport. It’s every man for himself boarding the plane. I'm almost mown down by trolleys as I stop to retrieve my dropped papers. It’s a two leg flight via Qingdao, which I’d never heard of before. Both airports are quite small, but the plane is delayed an hour at each because of ‘runway congestion’. When we get to Qingdao we have to disembark and even the stewards seem surprised that we are then marched through immigration and a very thorough security check. Out of the window I can see this amazing long bridge across a Yellow Sea bay.  Google will later tell me that it covers 26 miles and is the longest over water bridge in the world. Google can’t tell me in China, as Google is banned here of course.

The hotel is still a delightful refuge built into the old city walls. It has an open courtyard that’s candlelit at night. But this time my room opens onto this courtyard. There are loud American voices wafting through the open window (it’s an unseasonable 90 degrees in April), accompanied by the fragrance of soy and stir fry.

I’m here for the day as I’ve been summoned to a meetings (it’s compulsory) to be told about what to expect in North Korea, where I’m flying tomorrow.

I fill in the time with Chinese massage, as my back is still feeling a little delicate and I can’t expect any medical treatment in the DPRK. A medical massage is suggested. They allocate me to a guy, who seems to know what he is doing - it’s certainly helping. He has a long menu of treatments he is waving around and he suggests cupping and yet more ‘oil’ massage. If Gwyneth recommends it I‘ll give I ago. It just feels a bit weird having glass jars stuck on your back. The masseur seems to be whispering something - ‘You’re beautiful’. Perhaps I misheard, his English is pretty basic. No, he said it again. I’m not sure if he’s easily pleased or just trying for a large tip. I deem it prudent to refuse his offer of further treatments.

I’ve seen the main tourist sights before so I wander down the main shopping street, a pedestrianised version of Oxford Street and discover a much more atmospheric maze of food streets down a side alley. Scarlet lanterns, dragons and all manner of odd things to eat, including scorpion kebabs, their legs still waving on their impaled bodies. I never thought I would see the day when I felt sorry for a scorpion. Back at the hotel I ask the receptionist to find me a cab to take me to my meeting, three miles away. She can’t find anyone willing to come. Are they tracking me though some sort of sophisticated surveillance? Eventually she finds someone from the Chinese version of Uber. He takes an extremely long route, and the traffic is bad. But I'm only five minutes late. I don’t learn anything new at the meeting, which lasts an hour.  But then I’ve read the notes they sent - I suppose they have to cover themselves.

I venture out to find a taxi for the return journey. No-one will stop- they just drive round me or look the other way or shake their head. It’s Friday and a holiday weekend. Much against my better judgement I accept the offer of a rickshaw ride, having carefully agreed the price in advance. But after 100 metres the rickshaw driver decides that she can’t take me either. She tries to hail a taxi but with no greater success. In the end I walk back.

After my enjoyable stroll round the food streets I was beginning to wonder if I had misjudged Beijing. But I haven’t. Though I do have a pleasingly geometric pattern of bruises on my back.