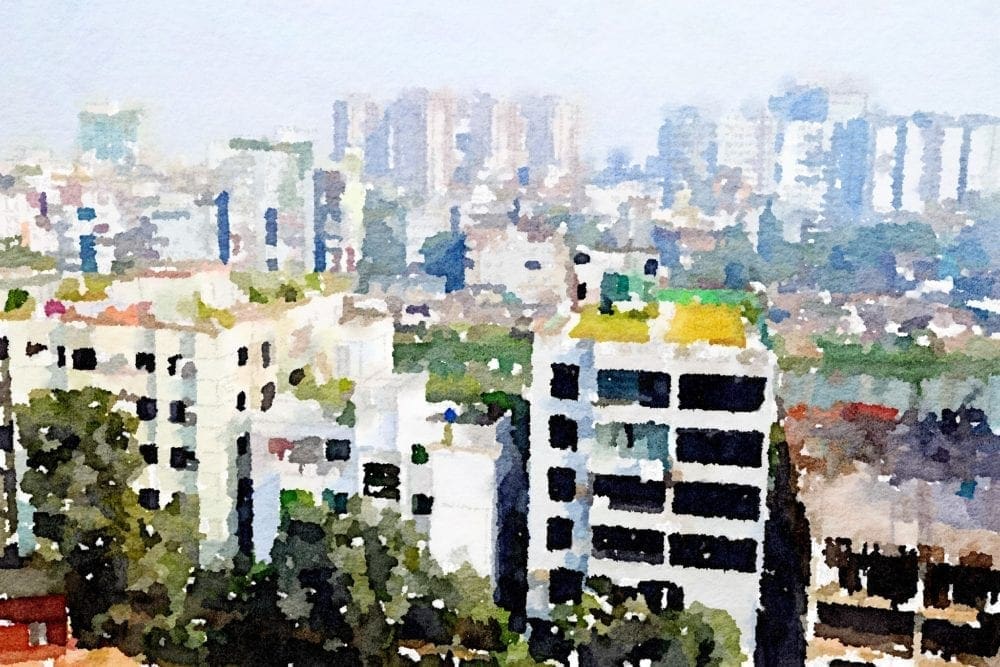 Well I’m in Dhaka, finally. My tour isn’t due to start till tomorrow, so I thought I would sleep, but that’s now feeling like a remote possibility. The city is relentlessly noisy. Everyone drives with their hands on their horns the whole time. Someone is blowing a whistle constantly, presumably a traffic policeman on duty. There’s a school opposite contributing the voices of several hundred students at break time. And every so often there’s a relatively melodic muezzin alongside. I’m on the ninth floor and I have a small balcony with a vertigo inducing drop to the street. I had to sign a disclaimer before they would even open the door so I could get onto it.

The view reveals a grubby skyline, mostly concrete blocks, many of which are not yet complete. There are lines of bright washing decorating most of the balconies, and some tumbledown dwellings lining a river at ground level. There are some more up market buildings with roof gardens fronting the water. Bangladesh is a country of many rivers, some of them mighty. Dhaka nestles in a bend of the Buriganga River (Old Ganges). It ranks among the most polluted rivers in the country. I flew over the huge Ganges/Brahmaputra delta on my way from Bangkok. It empties into the Bay of Bengal, the largest bay in the world.

I don’t need my alarm clock. The traffic bedlam begins early and the school yard is full by 7.30. My breakfast in the swish dining room is a buffet and my first reaction is that they left out last night’s dinner by mistake. It’s all beautifully polished chafing dishes filled with curry, rice and noodles. I set to cheerfully, it’s a while since I had Indian style curry. It’s only later that I notice the omelette man sidling into his station in the corner.

Even returning to my room is fraught. I know I’m in room 7004 and it’s on the ninth floor, because there’s a lobby and a mezzanine, but the button marked 7 in the lift won’t work (there’s and L and M button). It seems I have to deploy button 9 and all the rooms starting with 7 are found there….

I’m in my van again and can confirm that Dhaka is the most chaotic and noisy place I have ever been to. The traffic is truly terrible and sometimes stops moving totally for ten or fifteen minutes. It takes an age to travel from one sight to another. Atik, as I suspected, isn’t the most organised of guides. He’s entirely woolly about where we are going and how long it will take (even though he has Google) and has an irritating habit of saying things like, ’O yes, you would really like the bazaar back there, but we’ve missed it now and anyway it's only really good first thing in the morning’.

Nevertheless, moans over, it’s an absorbing day with the highlight being wandering the streets (I never get bored with this) watching the people. I should say trying to avoid the streams of people, moving rapidly with boxes balanced on their heads. Everyone in their turn is trying to keep out of the way of the multi coloured cycle rickshaws threading in and out of even the narrowest of streets. Most of the thoroughfares are also jammed with the green CNGs. This is what the Bangladeshis call the electric racing green (in Dhaka) rickshaws or tuk tuks. CNG stands for the compressed natural gas that powers them. And then there are the cars, buses and vans. The busses are extraordinarily battered, dented and scraped. I suppose it’s not surprising.

On the River at Dhaka

We navigate a couple of bazaars and the fruit market, the biggest in the world, alongside the river, where the activity is absolutely frenetic. Fascinating, but exhausting, dodging the crowds, and the rickshaws, trying not to step in the garbage on the ground or fall into the sewage channels running alongside the streets. We also take a boat trip on a vessel made of wood blocks that is close to the water and appears alarmingly flimsy. It’s misty and atmospheric and the water is thronging with other boats large and small, paddle steamers and ferries. Some of them are packed really tightly with passengers. ‘Don’t they ever sink?’ I ask Akit.

‘Oh yes; he replies nonchalantly. ‘People often drown. They can’t swim. And the water is very dirty. But they usually get picked up by other boats.’

This is by far the best part of Dhaka. Much of the time is spent stuck in traffic or eating lunch. Oddly, this is taken at a roof top restaurant that serves Thai and Chinese food. But it’s another great view over the city.

Nevertheless we also fit in atour of modern and colonial Dhaka before the sun goes down. The Curzon Hall is a grandly minareted brick British Raj-era building, now home of the Faculty of Sciences at the University of Dhaka. The building was originally intended to be a town hall and is named after Lord Curzon, the Viceroy of India who laid its foundation stone in 1904 .

There's also the very pink Ahsan Manzil, the official residential palace and seat of the Nawab of Dhaka on the banks of the Buriganga River. It's now a national museum. I've had to look up all this information. Atik told me the palace was Lord Curzon's mansion.

Lalbagh Fort is an incomplete seventeenth-century Mughal fort complex with some pretty gardens, also on the Buriganga River in the southwestern part of Dhaka. Here, Atik ventures the opinion that British colonialism was oppressive and we should give the Kohinoor diamond back. Interestingly, he adds that the British are viewed as being very intelligent and if you do something well the locals say you are being British.

More recent architecture houses the National Liberation Museum and the National Assembly Building (glimpsed through the iron railings). I’m none the wiser still, about the history of the war with Pakistan and India’s involvement. Gallery 1, with the introductions, is closed for refurbishment and the English translation in the other galleries is really poor. What I can read is hugely biased (as one would expect) and immensely hysterical in tone. I shall have to do my own research, but the stories of those who died and the accompanying artefacts are incredibly moving.

A Tourist in Dhaka

When the mist lifts, it’s exceptionally colourful. There are a range of hats and beards, many of the latter died with henna. And the women are gorgeous and elegant in their silk saris and salwar chemises. We hop on a cycle rickshaw ourselves when the traffic round the van comes to a dead halt. Atik apologises but I say it’s mandatory that we give one a go in any case. The sheer terror of executing a U turn in the face of oncoming traffic is an unmissable experience.

Throughout, I’m treated like the queen. Everyone stares, but is very friendly, calls out, wants a selfie, or poses for me to take their picture. There are no other tourists at all that I can see. The world wide web tells me that the people of Bangladesh seldom smile. This is not because they are unfriendly, but because smiling  is considered a sign of immaturity.

Back in my comfortable western style hotel I’m coughing and sneezing. Welcome to the traffic and pollution of Dhaka. Dhaka is the world's second least liveable city, behind only war-torn Damascus, according to the Economist .

Bang-ladesh - They're Right About the Accident Rate

On my final day driver Ekram and Akit want to take me to the big vegetable market. They are very keen, even though there is nothing on my programme.This involves leaving at seven in the morning, so the roads are relatively clear. I’m wishing someone had pointed this out earlier in the trip. Getting up early is a sacrifice worth making under these circumstances. However, my musings are brought to an abrupt halt as we are hit by a bus.

I’m convinced my time is up, as I see the bus heading straight for me. My life doesn’t flash through my head and nothing goes in slow motion. It’s all fairy tales. I just think ‘This is it’ and then the bus veers and goes into us, just behind me. So, I’m very lucky – only bruised and very shocked, I think. The side of the van is caved in and the windows are completely shattered. The bus driver has run away in case he gets lynched. This is Bangladesh, where life is cheap. The bystanders (and other occupants) are far more interested in the van and police reports than in whether everyone is okay. The local tour office manager turns up and doesn’t even address me. Poor Ekram is bemused. He’s never had an accident before, which is some accomplishment here. I return to the hotel in an Uber car and soothe myself with French toast and tea. I don’t think I will be going out again today, until it’s time for my flight to Kolkata.