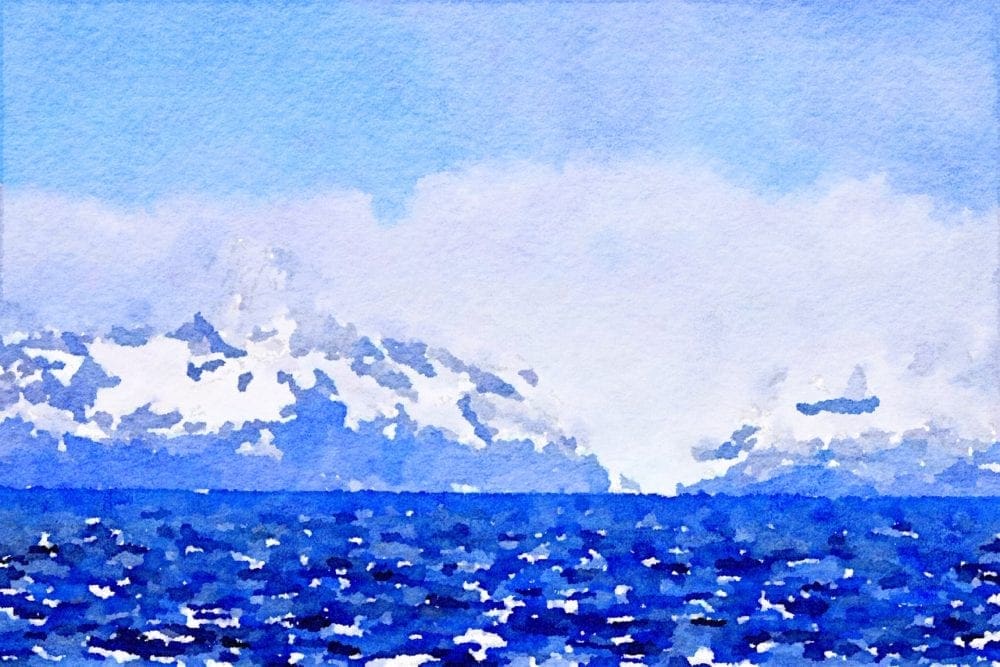 19  December - South Georgia - In the Wake of Shackleton

From the Antarctic Peninusula, across the Scotia Sea, the eastern end of the Drake Passage, following Shackleton’s route to South Georgia. Thankfully in a much larger vessel. Thankfully also, the weather is mild, the sky is blue (though we’re been trying to outrun some snow clouds all day) and the swell is running in the right direction.

The crew do their best to keep us entertained, encouraging us to run around the ship pursuing whale sightings (imaginary or otherwise) and then, as they peter out, lauding the antics of the sea birds wheeling in the ship’s wake. There are also a series of Antarctic themed lectures. Naturalist, Matty is one of the most infectiously enthusiastic presenters. He’s from Fareham originally, but now has pan-galactic accented English, promoting his offerings by referring to his 85 year old granny’s gradings. ‘Pinnipeds (seals) are ranked presentation number 3’, he explains over the intercom. I think this is a positive.

20 December - As We Are Heading for (South) Georgia

Another balmy day, at six degrees Celsius, though another long one, with an open, gentle sea, the odd giant petrel or black browed albatross overhead and humpbacks alongside. There are more mandatory briefings (there’s a register) and bio securing in preparation for tomorrow’s landings on South Georgia. It all helps to keep us busy. Much is said about the danger of fur seals in the breeding season. The fur seal population was almost wiped out by hunters in the early twentieth century, but they have come back with a vengeance. It is believed that the fur seal population is now almost fully recovered to its nineteenth Century levels. The seals are said to be fast and aggressive and prone to bite. I’m not as keen to go ashore now as I was. Though South Georgia is billed as The Greatest Wildlife Show on Earth.

We are woken at six (which is actually five, as the clocks have gone forward an hour) to find we have reached South Georgia. The ship is entering the stunning aquamarine Drygalski Fjord, waterfalls, razor peaks and glinting glaciers. This is reputedly where James Cook first set eyes on the island.

The wind is blustering at 60 miles per hour and it’s a struggle to stay upright and enjoy the views; the bow is off limits. Unsurprisingly, this morning’s landing at Cooper’s Bay is off (including, sadly, the macaroni penguins) and we are motoring on to look for more sheltered spots. Appropriately, the headland is named Cape Disappointment. This is to reflect James Cook’s mood when he realised, he had not after all, reached the South American continent.

The weather calms and we are finally decanted at Gold Harbour, one of the island’s iconic viewing spots. There are fifty thousand king penguins, adults and chicks nestling under an azure sky, bit parts are played by elephant seals and fur seals and the whole is framed by mountain peaks and a tumbling glacier. The king penguins are more dignified than the comical gentoos, who still make their presence known, waddling through from the tussocks behind the beach. The air is alive with noise. The fluffy brown king penguin chicks, puffed up balls that are often larger than their parents, whistle, the adults hum like electric grid stations and the elephant seals make farting noises.

The elephant seals mostly dispose themselves about the beach in heaps, occasionally making a bid for another group with languorous break-dance movements. After a few wriggles they have to rest, eventually belly flopping on top of the pile, causing mayhem for a few seconds as they all shuffle around. The large males butt heads, pink mouths ferocious and wide, before they all subside.

The fur seals are far more energetic, moving at an alarming pace. They growl and bare their teeth if we approach too closely, making mock charges. We’ve been instructed to bring walking poles to brandish (not too ferociously) if necessary. But it’s the gorgeous king penguins that are the stars of the show, stately in their dinner jackets, gossiping in groups, politely welcoming and gently curious.

Making our way westwards along the north coast. Another iconic spot today - St Andrew’s Point. We hike over grassy hillocks, terminal moraine and through a rushing river, to a vantage point on a ridge. Here we look down on 400,000 pairs of birds assembled in piano keyboard rows, a cacophony of noise and splendour. The king penguins are at all stages of their 14-month breeding cycle. Groups of chicks clamour for food. It’s a long time for a chick to evade predators whilst waiting hopefully, beak ever at the ready, for his parents to bring him something to eat. Giant petrels line up to sail down the river. They bob along and then skitter into groups of astonished penguins, huge wings held aloft.

On the open grass areas, the fur seals indulge in mock battles and sexual foreplay. The males of both the elephant and fur seal species are mainly the beta boys. Most of the alphas have had their wicked way and left for sea, so the betas are doing their best with their leavings. There are continuing skirmishes with the younger females who have not yet mated. The air reeks of fur seal musk.

A Toast to Shackleton

In the afternoon Grytviken, where we toast Ernest Shackleton with whisky. His epic and aborted voyage to Antarctic in 1922 ended almost as badly. He and five other men travelled from Elephant Island to South Georgia, by life boat, to fetch help for his crew . They arrived on the wrong side of the island and had to climb the unexplored mountains of the interior to reach a whaling station to get help.

Shackleton died of a heart attack on his return to South Georgia, preparing for another expedition. He is buried in the Grytviken graveyard. To be honest, I’m not clear why he was so venerated, as none of his four expeditions seems to have been very successful.

There’s a little museum devoted to Shackleton, the eradication of rats and the history of whaling, Whaling ceased here in 1965, but is still evidenced by rusting boats ruined habitations and machinery. Officials are keen to explain that South Georgia Island had a large problem with invasive rats. These hitched aboard early whaling vessels and all but wiped out many nesting sites for seabirds by eating their eggs. The government embarked on the world’s largest ever rat eradication programme. This involved spreading tons of pellets of rat poison around the island, using helicopters and manual labour. It worked – they even brought in specially trained terriers to check that no rats remained.

More superb mountain scenery, low snow-capped peaks and glaciers - sadly receding fast. Over scree, trying to keep an eye out for the ten thousand very excitable fur seals, each determined to protect their own five square metres of territory. There are many more males in this area. The alpha seals boisterously pursue those errant females in danger of being lured away from their harems. They’re giving the penguins a hard time, charging through their ranks and scattering them, as they scrap. (I would say sending them flying, but they can’t.) Matty is leading the way, acting as the seal whisperer. ‘It’s ok old chap, we’re just going past’.

There are larger numbers of adolescent king penguins here. They look oddly ragged as they moult, brown fur, hanging on in patches, and revealing the glorious black white and yellow beneath. It’s only bright orange when they are fully mature. Swimming, in the many small pools or the sea, is a popular pastime for the penguins. The sea is not just a source of food. It’s single file again, into the water, sliding in on their stomachs, and paddling along in a tight flock by the water’s edge, (it's called a raft). Until the inevitable fur seal makes an appearance and they splash back to shore with significantly less decorum.

Sally and Bob from Perth feature often in my meanderings. Bob pops up as often as a meerkat, wielding his tripod and video camera.

Up the coast to Stromness, where Shackleton finished his epic trek. It’s another derelict whaling station that has been totally overrun by seals. There are so many pinnipeds that we take to the zodiacs, instead of running the gauntlet ashore. The seals are literally rocking and rolling all round us in the icy water. We cruise past the beaches and ruins at Stromness and pop around the corner to the largest station of all, at Leith. Now, it’s cold and rainy and altogether like being back in Scotland. But overall, it probably is The Greatest Wildlife Show on Earth.

24 December - Batten Down the Hatches

Today, the weather is playing with us again. We’ve been blown out of the Bay of Isles and past Bird Island, sadly no albatross nests then. W are heading for the Falklands early. They’ve told us to batten down the hatches. Christmas dinner is served this evening. This is too European in my book - but hey by then I’m surviving on sea sick pills and another injection anyway.