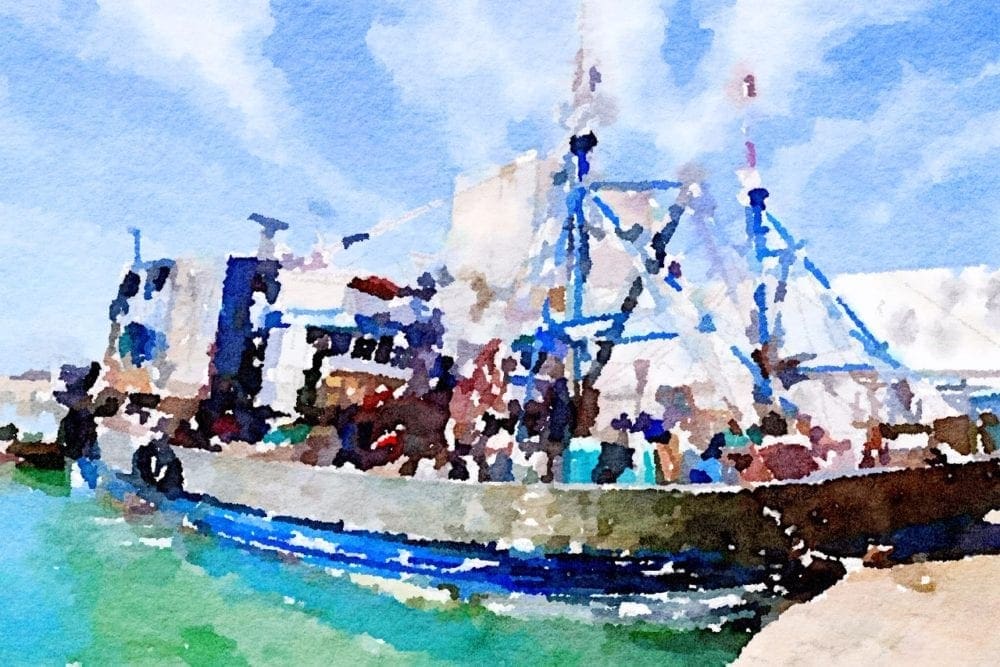 Boujdour - The Place for Cold Conger

South from Laayoune with driver naji and guide Khalil. The seaside town of Boujdour in Western Sahara is expanding rapidly, a spread of toytown houses still under construction. There’s a huge welcome gate flanked by statues of ostriches, the main thoroughfare is lined with stylised lamps and there’s an imposing lighthouse.

Dinner in a  restaurant on the outskirts of town, as it's the only one that's open, unless I want pizza. It’s early and most of the charcoal under the rows of clay tagines on display is just being lit. The waiter says that conger eel  is the only dish that can be served imminently, so, with foreboding, I settle for this. The leathery fish is still cold and the food can only be described as nasty. Back to my hotel, but I’m not going to be sleeping for some time. It’s the local football derby in Casablanca and it’s being televised, to much excitement. It seems that the entire population is watching in the hotel bar below. The whole building vibrates when there’s a goal.

Where the Sahara Meets the Sea - and the Road Disappears

South to Dakhla, off-roading for the most part, right by the crashing waves. There are mini dunes here, rolling into the ocean, the desert meets the sea..

Fishermen have set up camp  at intervals, building fires behind rock slabs  and we sit and drink more of the noxious tea with a hospitable group. The children are braving the ocean in their trunks; I admire their fortitude. Its breezy, even when the sun comes out, and I’m keeping my jacket on.

The fishermen invite us for a barbecue calamari lunch, but the road beckons. We speed on, spraying sand, dispersing flocks of white headed gulls and stopping to check the route with the locals, as the dunes shift constantly. The tents here are larger and decorated with flapping textiles. Guide Khalil says that people come for the weekend – but I’m not sure that's accurate information. Some of them seem to have brought goats.

Driver Naji struggles to find a safe way back up to the main road, the sand has shifted into new dunes since his last visit and he can't see the track, but he eventually locates a suitable path and instructs us to climb up ahead, just in case he's miscalculated. Then he careers over the sand and rocks to the top of the cliff.

This area is famous for its wind surfing and my hotel is a very up market all-inclusive beach club with wooden cabins, its own sports centre and fabulous sunsets across a huge stretch of rippled beach and the arid peninsula opposite, to Dakhla town. Like much of Western Sahara though, it’s still under construction. I have to be careful not to fall into the deep excavations as I make my way round to the restaurant at dusk. The hotel manager, Oliver, sits with me at dinner and we try to compete with the live music. He’s a delightfully polite and very attractive young Mauritian, so it’s absolutely not a chore.

Dakhla town is some 25 kilometres across the water, down a narrow peninsula. At the very tip, a conglomeration of small fishing boats, maybe a thousand altogether, pulled up onto the beach, pennants fluttering. In the main port, up the road, the larger trawlers are unloaded. The auction hall is a bustle of  men in white coats, arms wind milling, shuffled plastic boxes and chutes of ice.

Lunch is fish, what else? Grouper, baked quickly in a very hot oven surrounded by a medley of sliced vegetables. It’s delicious, eaten in a Mediterranean style  blue and white waterside restaurant.

The White Dunes - and the Hungry Camels

Les Dunes Blanches is an astonishing  valley of alabaster dunes and outcrops of dusty white pinnacles, inhabited only by a herd of camels. Khalil entices the camels to the car with the crackling of cake wrappers and one female with a cute calf, snowy to match  the landscape, ventures so close I’m in danger of being drooled over as she reaches through the window. I can vouch for the fact that they have very big teeth.

Thankfully, the animals move away, rolling gracefully up the dunes and calling loudly to each other from mesas across the valley. Beyond this, ghostly fingers of  peninsulas, dropping into the sea, dots of feathery flamingos, rippling flat sand and pools with perfect reflections. At the end, a giant dune, a blustery  platform for admiring the whole panorama.

Next, the border with Mauritania. Endless flat white desert topped with scrub and enlivened by the odd mesa. Nothing but emptiness for 300 kilometres. The occasional truck careers past. Road signs are cause for excitement. The highlight is the crossing of the Tropic of Cancer.