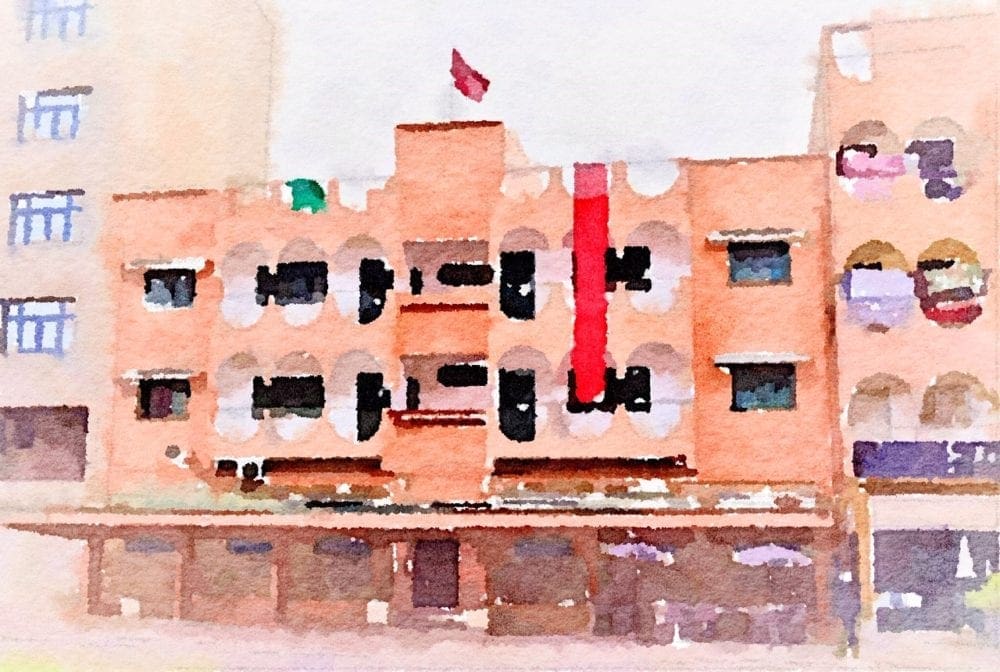 Laayoune (or El Aaiún ) is the capital (or principal town see Western Sahara in a Nutshell) of Western Sahara. About 40% of the population live here in this seaside city. The modern city is thought to have been founded by the Spanish captain Antonio de Oro in 1938. In 1940, Spain designated it as the capital of the Spanish Sahara. Tourism is virtually unknown but the tourist office have hopefully dubbed it 'The City of Sands'.

Woken by the sound of the muezzin. We’re on the same time as central Europe here, in Laayoune, but on a more westerly latitude. The sky is  full of cloud rolling in from the Atlantic, on these wintry mornings, so it’s dark until nine o’clock. The people in the shops are gloomy too – guide Khalil says it because they don’t like getting up when the weather is like this and often stay in bed until midday. I don’t notice that their mood improves as the day progresses.

Crimson Moroccan flags flutter on most of the buildings and are draped across the facade of anything remotely civic. This is a sparsely populated country with few urban areas, but these are under development as Morocco strengthens its foothold. And this is the capital. (I’ve tried asking guides Khalil and Naji about politics, but as far as they’re concerned this is Morocco and they’ve never heard of any conflict or a dividing wall.)

Dinner is a typical feast, a fried fish platter - a huge heap and very tasty indeed in an open fronted restaurant. Then my new guides, Naji and Khalil, and I wander round a small community fair,  jam-packed with locals. There's  a children's' carousel,  a whirling waltzer and a brightly illuminated jump-and-smile, while all the passengers scream and ooh and ah.  Next door a tented Arab market, stalls  stuffed with trinkets, clothes and Turkish delight.

Tomorrow I'm off into the Sahara Desert...