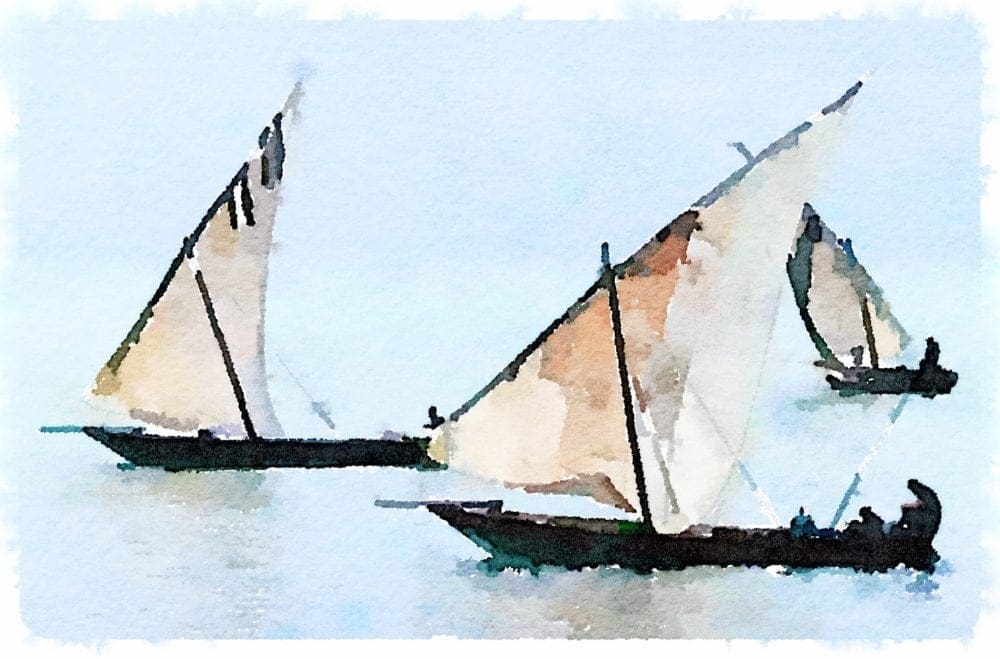 Over the border from Kenya. Our first stop in Tanzania is Musomo on Lake Victoria, Africa's largest lake. The town has a great market. The lake is immense, brimming with graceful white sailed dhows. We are at Tembo Beach, with proper sand, and have been allocated rooms in a small hotel, as storms regularly take out the tents here. Nonetheless, three hardy souls have pitched theirs. Paint is peeling off the floor and there's only cold water, but I'm in paradise. Nile perch for tea and a stunning sunrise. 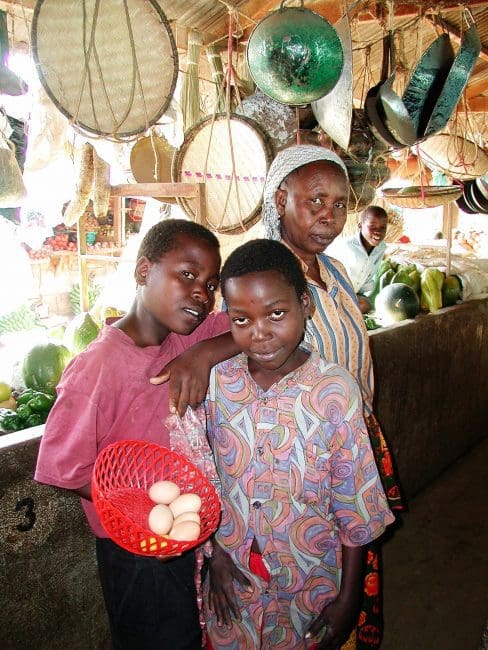 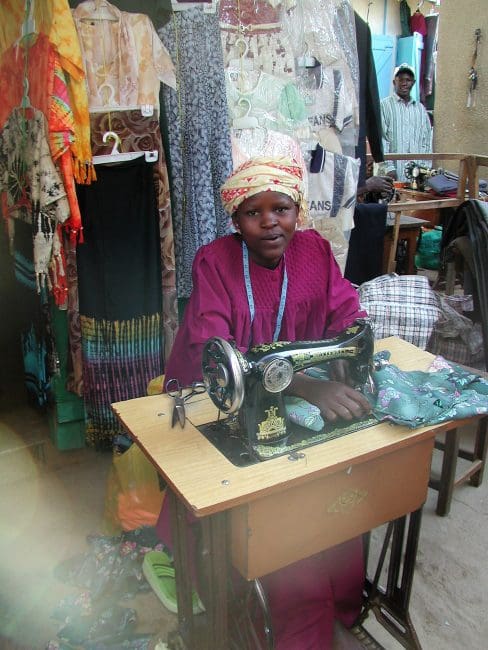 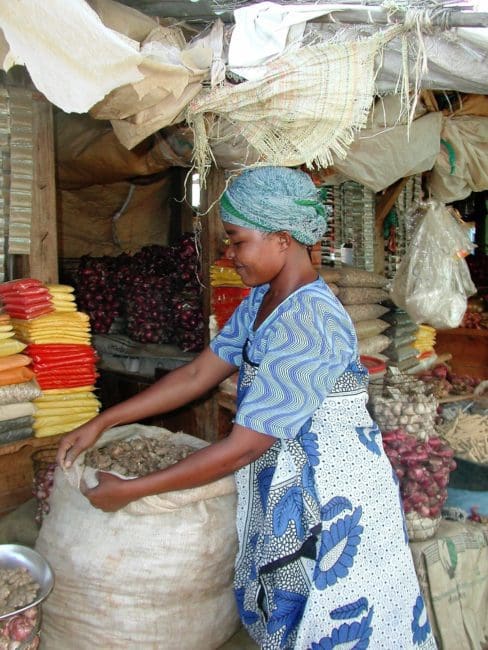 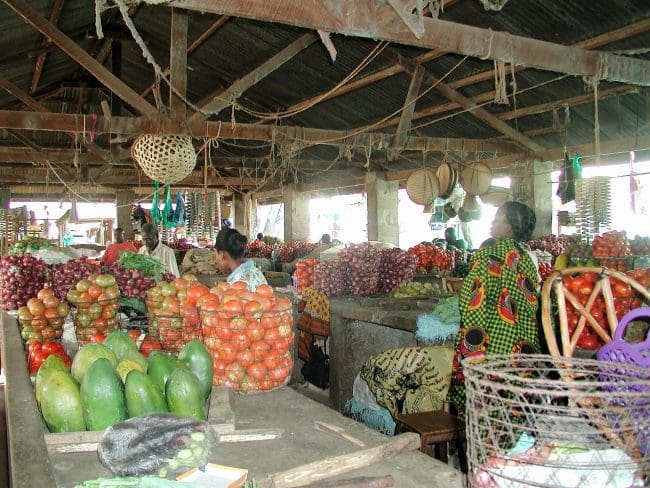 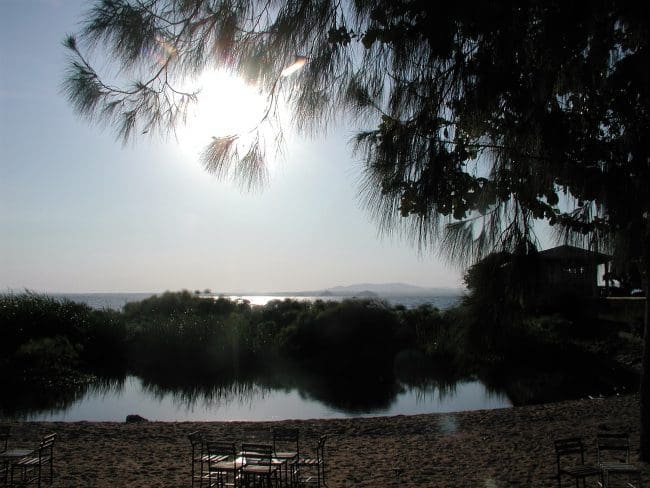 The first Stone and Bronze Age, prehistoric migrations into Tanzania included Southern Cushitic speakers from present-day Ethiopia, Eastern Cushitic people from north of Lake Turkana and the Southern Nilotes, who originated from the present-day South Sudan–Ethiopia border region between 2,900 and 2,400 years ago. They were followed by the Bantu peoples moving in waves from West Africa.

The area was colonised by the Germans during the late nineteenth century and incorporated into German East Africa along with Burundi and Rwanda. After World War I the region was handed over to the British. The mainland was governed as Tanganyika, with the Zanzibar Archipelago remaining a separate colonial jurisdiction. The sovereign state of Tanzania is now a presidential constitutional republic, a de facto one-party state with the democratic socialist Chama Cha Mapinduzi party in power.

Today, Tanzania's population (about 64 million), is slightly smaller than that of South Africa and makes it the second-most populous country located entirely south of the Equator. The Tanzanian peoples are composed of about 120 ethnic, linguistic, and religious groups.

Tanzania is mountainous, densely forested in the north-east, around Mount Kilimanjaro and is surrounded by three of Africa's Great Lakes. To the north and west Lake Victoria, as already mentioned of course, and Lake Tanganyika, the continent's deepest lake, known for its unique species of fish. To the south lies Lake Malawi.

A Balloon Ride Over the Serengeti, Tanzania 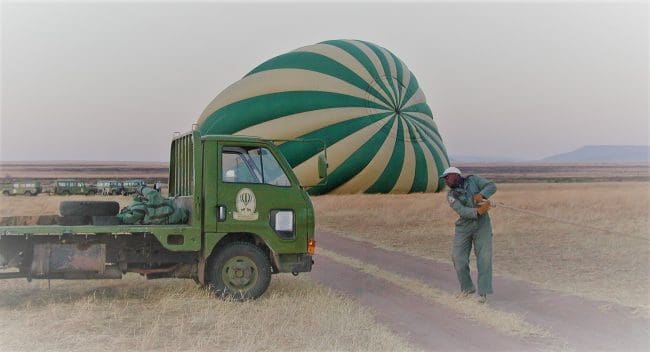 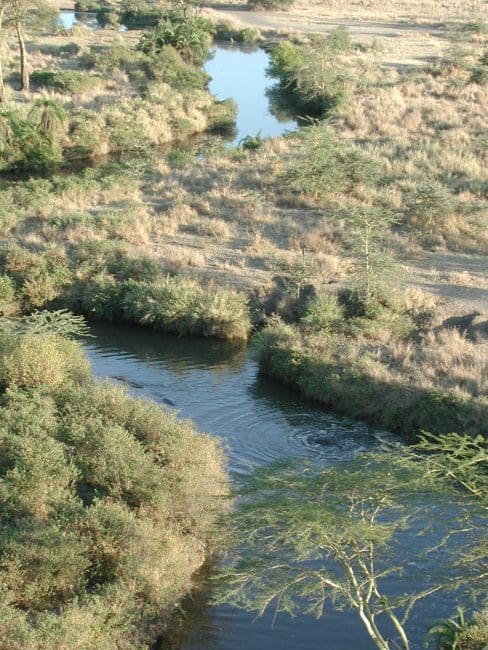 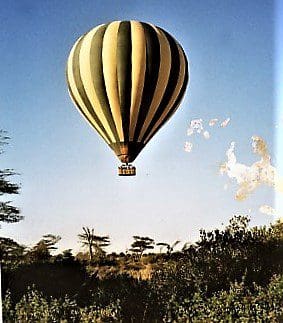 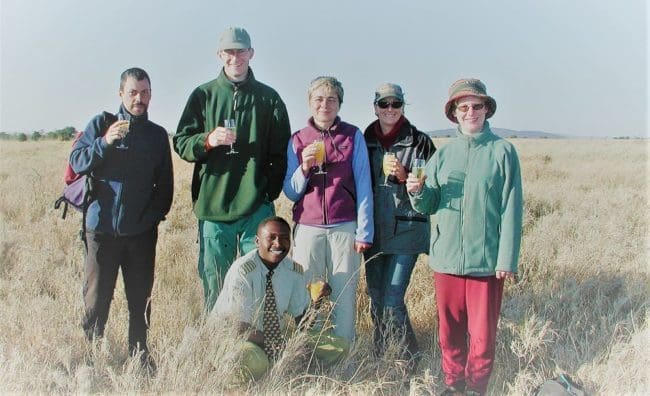 Continuing through the Mara and into the Serengeti National Park, a World Heritage site. This huge national park is home to the largest lion population in Africa. Indeed, a frustrated lion is batting away vultures surrounding his kill, as we arrive. He's not very keen on us either.

Hot air ballooning down The East African Rift Valley is an absolute doddle after the white water rafting in Uganda, very gentle, serene, absolutely fantastic. Like Robert Redford flying his plane in Out of Africa. The gazelles below, leaping along with us and the hippos heads bobbing in the blue pools. I would have done it again the next day, if I could. It's a shame that it's impossible to clear pictures of the animals, they're moving so fast. And that Robert Redford wasn’t at the controls.

There is plenty more wildlife to spot, on the ground. Hyena, elephant, giraffe, wild dogs, crocodiles, to name just a few. but the big entertainment is the Great Circular Migration. Here, we meet the massive annual migration of millions of blue wildebeest, zebras, Thompson gazelles, and other animals. It's frenetic, though they are not careering along like they do when David Attenborough commentates. 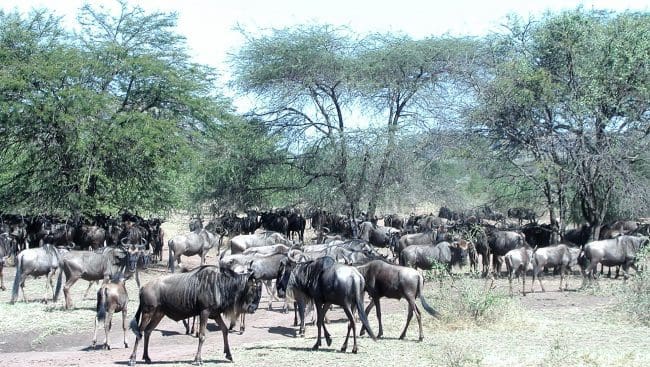 A bone-rattling, dust-filled drive to Ngorongoro, This is also a World Heritage Site, abutting the Serengeti National Park. And this is where the Great Circular migration begins. Though we saw most of the migrants on the Serengeti.

Ngorongoro is famous for its large volcanic caldera. The conservation area here also contains Olduvai Gorge, one of the most important paleoanthropological sites in the world. home of homo habilis, where Mary and Louis Leakey notably made their discoveries.

We take jeeps down the steep slopes into the crater. It's a  little quiet, after all the animals we have seen already, on their way north. There is dik-dik, zebra, some left behind wildebeest and hosts of flamingos. A lion and lioness perform a scene from the Lion King on a rock platform for us. It’s also freezing at night - we are high up here on the plateau in our bush camp. I sleep in all my clothes and borrow a hot water bottle. Buffalo, zebra and elephant surround the tent. What am I complaining about? 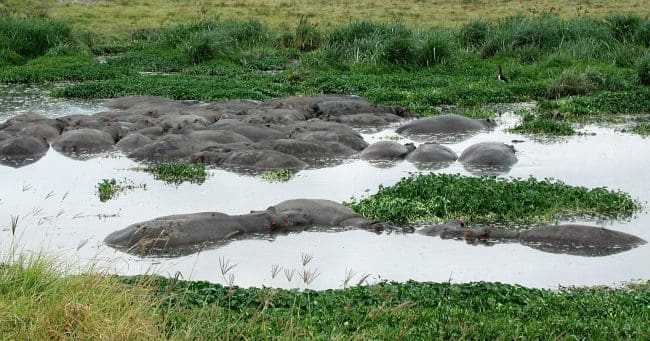 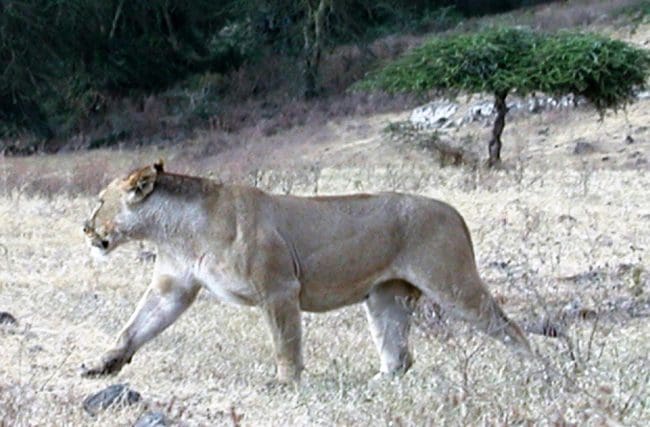 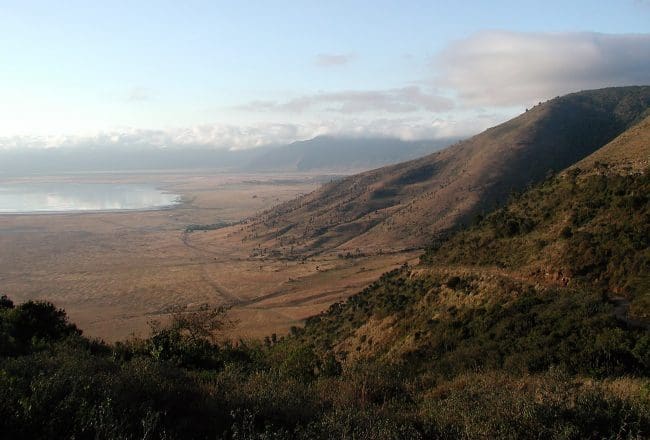 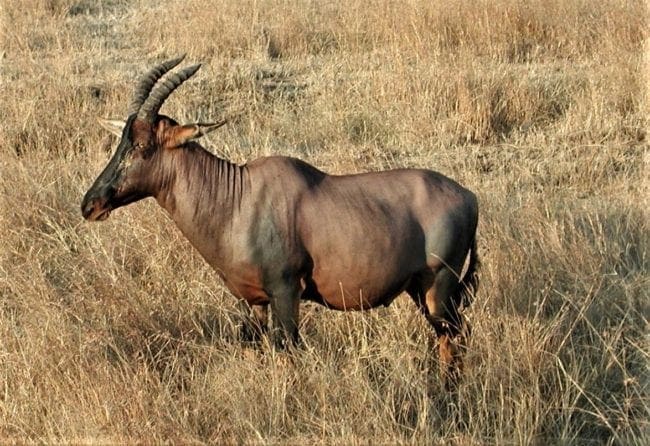 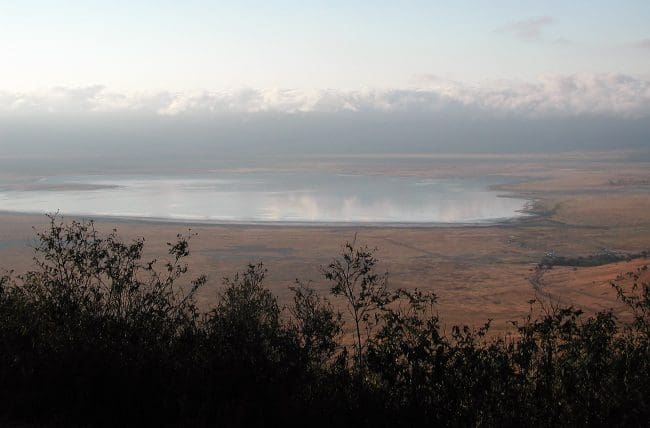 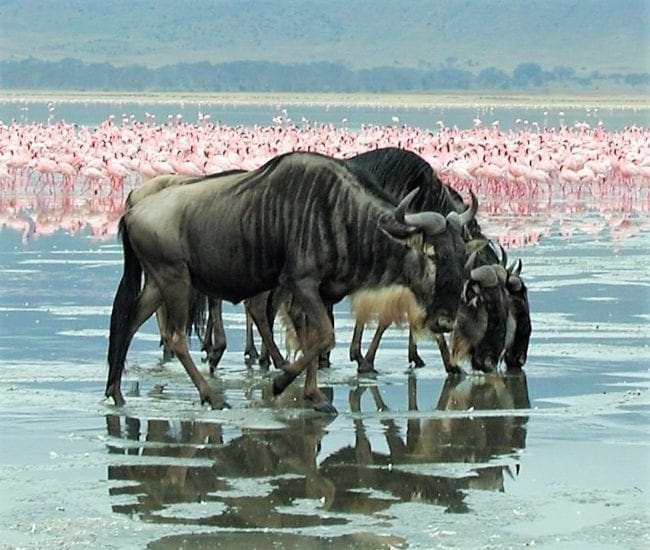 Across Tanzania, through Arusha to Merangu, camping on the slopes of Mount Kilimanjaro. Mount Kilimanjaro, on the border with Kenya, is the highest mountain in Africa and the highest single free-standing mountain above sea level in the world (5,895 metres above sea level and about 4,900 metres above its plateau base). Take that Fuji. usually snow capped, Mount Kilimanjaro is a dormant volcano with three volcanic cones: Kibo, Mawenzi, and Shira. As usual. the mountain is elusive and we have to imagine what it looks like without its cloud shroud. It's a magnet for hikers, but they must have to wrap up. It’s still really cold, even down here.

Past sisal plantations, scenes straight out of William Boyd's An Ice Cream War. On to bustling busy Dar es Salaam and a ferry to Zanzibar. Dar es Salaam is the former capital, retains most government offices and is the country's largest city, principal port, and main commercial centre. (The relatively unknown capital of Tanzania, home to the president's office, the National Assembly, and all government ministries is Dodoma.)

Zanzibar is an archipelago and Unguja, also known as Zanzibar Island, is the biggest of the two main islands. (the other is Pemba.) There's evidence of human habitation going back 20,00 years here. The main early settlers were the Bantu. Swahili civilisation was disturbed first by Portuguese colonisation (Vasco da Gama) and then by the Omanis in 1698. The latter, even established Stone Town as the capital of their sultanate for some time. Zanzibar next became a British protectorate in the nineteenth century, as part of a drive to persuade the sultanate to abolish the slave trade. The British terminated the protectorate in 1963, a move which was rapidly followed by the Zanzibar Revolution. The incumbent sultan was deposed and the new republic merged with Tanganyika to form the nation of Tanzania. Zanzibar retains autonomous rule within this republic.

Zanzibar's name sounds exotic. The Arab influence is clearly evident. And it's known for its cloves, nutmeg, cinnamon, and black pepper. and so has the soubriquet. the "Spice Islands". The government has capitalised on this in its (apparently) successful drive to increase tourism. .At least the camping's over, thank God. Hotels from now on, but the bumpiest of roads to rustic bungalows on the northern beaches. Comfort, snorkelling and sunbathing. 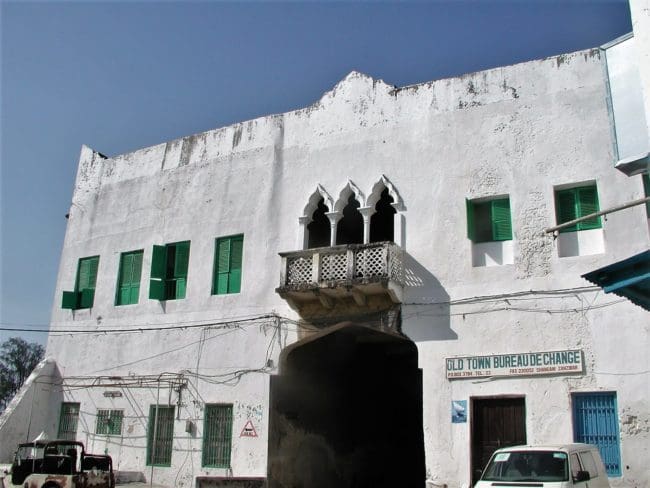 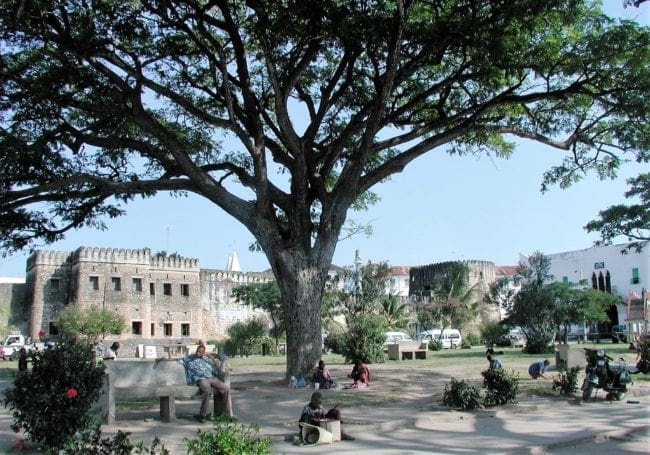 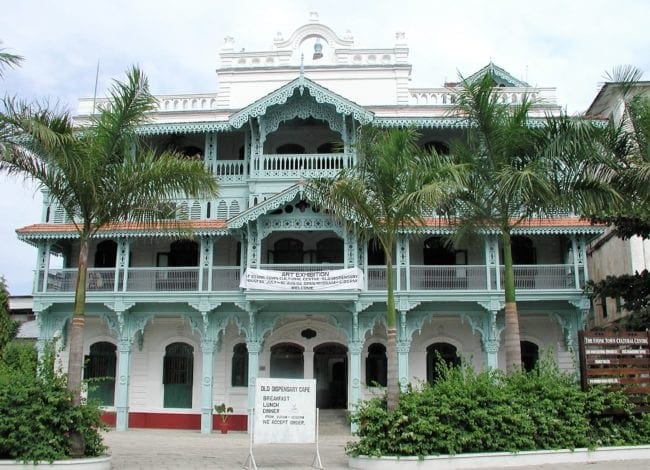 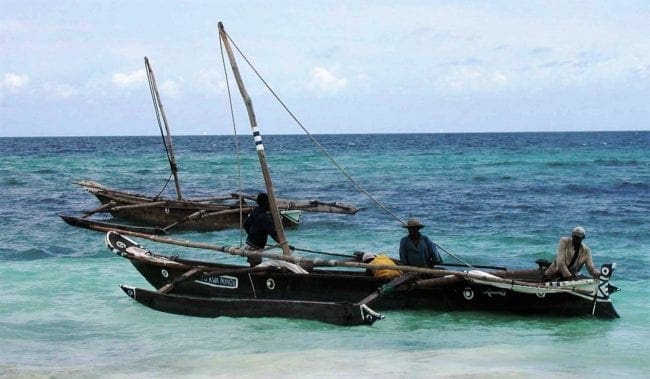 The oldest part of Zanzibar City, Stone Town is a labyrinth of mosques and winding lanes, an enticing fusion of Asia and Africa. If you discount the Internet cafes. This old trade centre is great for exploration. The 1883 House of Wonders, the landmark building, just behind the Fordhani Gardens, is a former sultan’s palace with a clock tower. There are also the Old Fort, the late-nineteenth century Hamamni Persian Baths and a museum. Not to mention all the impossibly picturesque fishing dhows, sack sails furled or unfurled. 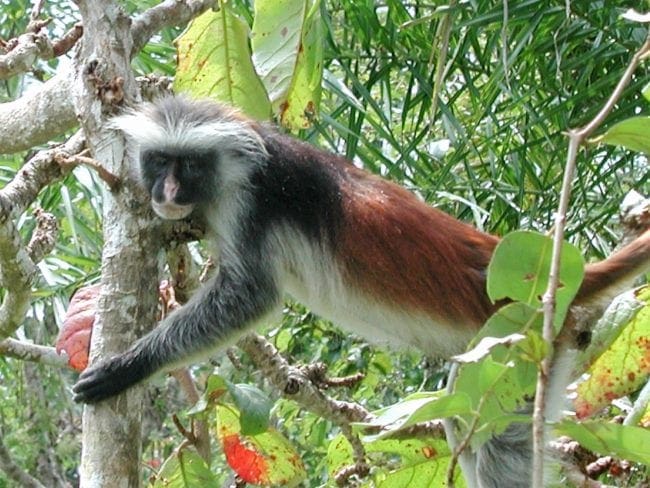 Then I'm off to the east for some time all on my own. On the way I stop off at Jozani Chwaka Bay National Park (the only park in Zanzibar) to see the rare red colobus monkeys who ignore us and feign sleep, hammock-like between two trees. I’m flailing, trying to get a good picture before I’m hauled back by my guide who has noticed a deadly green mamba, also flailing, but in my direction.

The beaches are colourful, sprinkled with hibiscus. The fishing dhows with their distinctive triangular sails swoop up and down the coast. The hotel is remarkably comfortable. Massage and prawn coconut curry. And it’s a very small world. I go snorkelling and spend eight hours afterwards - we just went 'for a drink' - with Phil, from Dar,  who turns out to be the cousin of Raye, a previous travelling companion from Brighton. The next day, dialogue with the lady on the adjacent sunbed reveals that she was once a student of my ex, Neil. 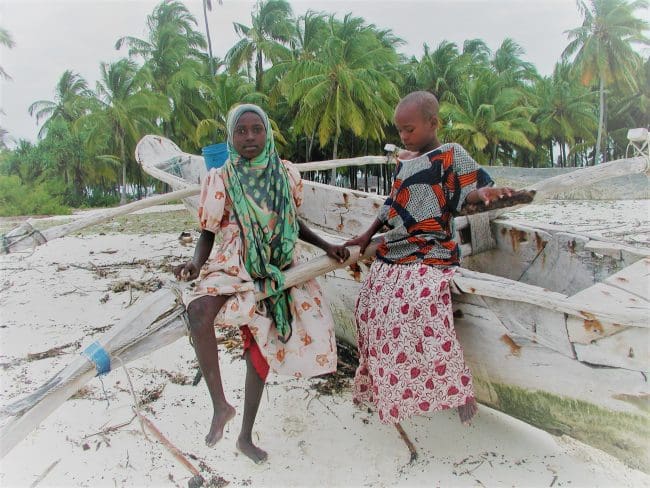 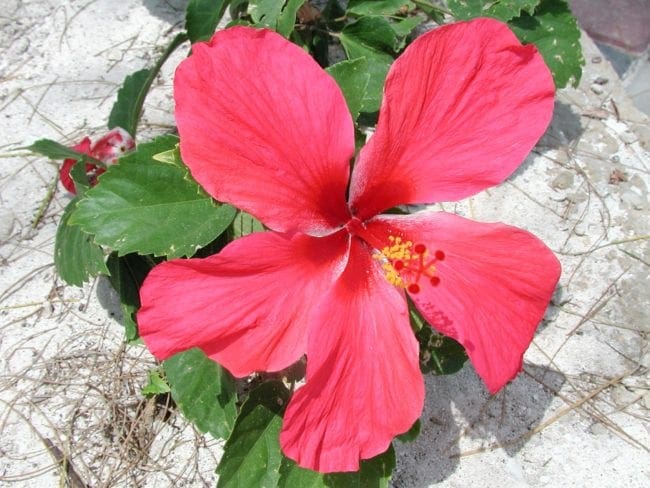 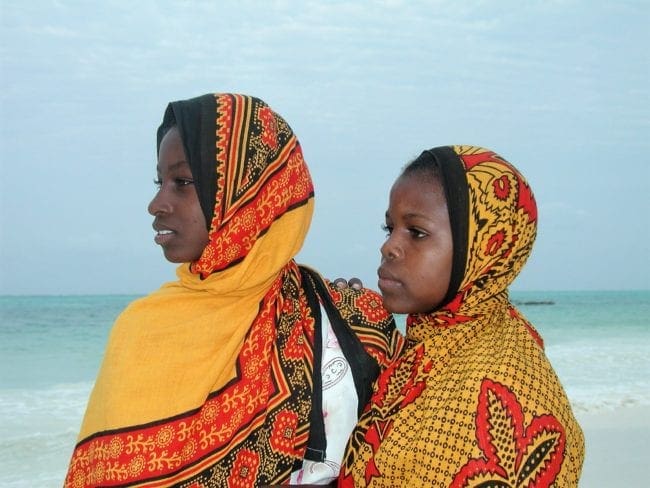 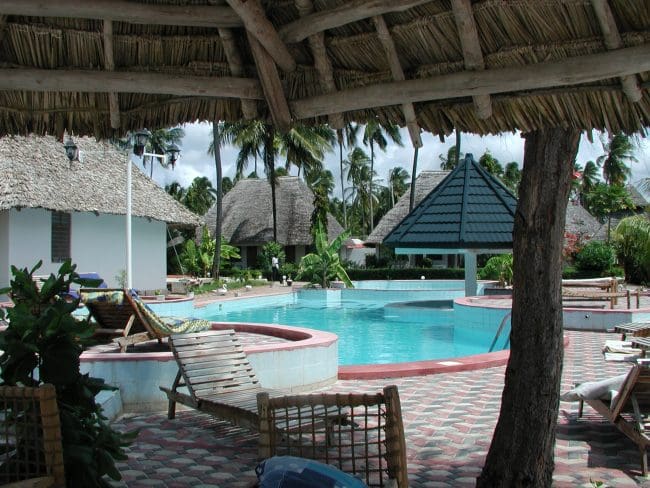 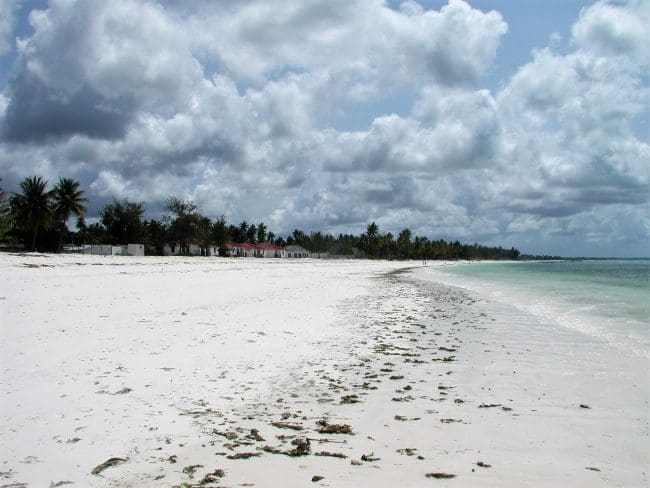 The flight home from Tanzania is on Ethiopian Airlines via Addis and is eventful. I get my view of Kilimanjaro - the pilot flies so close to the peak that I can see the trekkers on the winding paths. On the next leg we are struck by lightning.