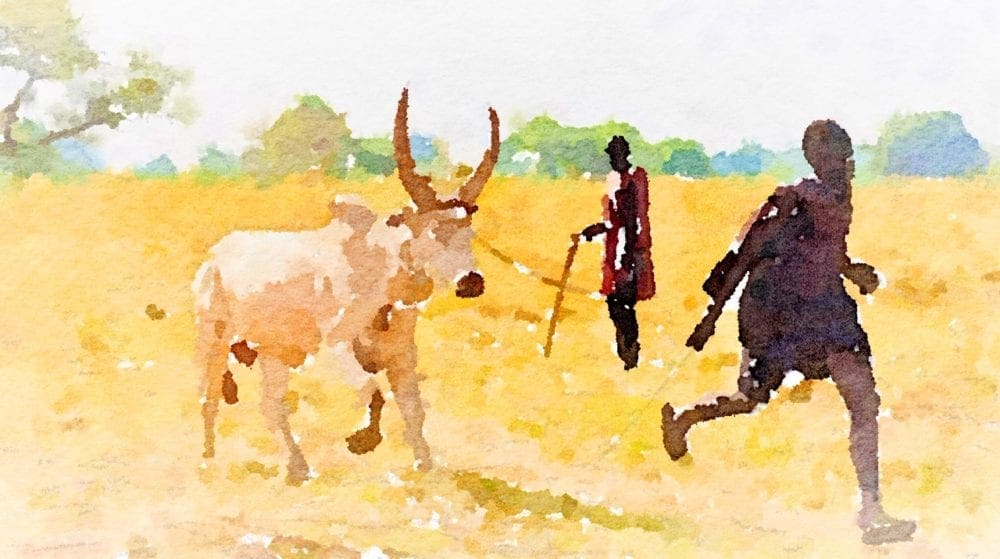 Wake up early to ready myself for my trip to the Mundari cattle camp. Go in shower. Phoned at seven by guide Duncan to tell me to order a packed lunch from the hotel kitchen. Go back in shower. Phoned by Duncan to say he is in the kitchen. What would I like for lunch? Try to order without being able to read what is on offer. Fried chicken and chips are suggested. I’m not sure how cold chips will taste. Go back in shower.

The road from Juba to the traditional Mundari tribal lands, located around the town of Terekeka, is un-made, but looks fairly even. It isn’t. Two hours of jolting past fields, corrugated roofed huts and two security road blocks takes us to a side road into the bush. I say side road. It isn’t a road, or even a track. We’ve picked up Mundari guide, Martin, who directs us for ten minutes over the rough grass, swerving to avoid the undergrowth (not always successfully), to a boggy rivulet. The itinerary didn’t say anything about having to wade through squishy mud up to my knees. Aside from worrying about falling in and getting wet, I’m not sure what else is lurking beneath my feet.

Another ten-minutes, walking. Martin bounds ahead, even though he’s been shot in the leg in the conflicts and uses a stick. Now we’re at the Nile proper and Martin ferries us across in a leaky wooden canoe. I’m allocated an upturned tin bowl to sit on. Duncan crouches, in a vain attempt to keep his Lee jeans dry.

Now we’re on an island in the middle of the river and it’s a total contrast to the city. This very much a traditional lifestyle, based on herding cattle and agriculture. We are greeted warmly, extended palms waving, and everyone demands photographs. I tour the little rush huts, taken over by tiny bleating goat kids during the day, and view porridge eating and clothes washing, accompanied throughout by a series of increasingly frenetic tableau. Adults and children dispose themselves in assorted postures grabbing drums, musical instruments, then dogs, goats and even calves as props. As a final coup de grace the warriors fetch out their rifles and flourish them above their heads.

These Nilotic peoples are tall, elegant and slim. The Mundari are locally famed wrestlers, and compete against other villages in traditional shows of strength. Most of the boys are entirely naked, except for a rope lanyard, or string of beads round the hips. The girls and young women wear short skirts, the latter often with cloaks, revealing one breast. Some of the faces bear the patterns of ritual scarification, although the government is trying to halt this practice. Nearly everyone’s skin is covered with mud and ash to protect from the sun and insects; some of the smearing is done in intricate ceremonial patterns. At least my feet are now the same as everyone else’s. After each set of pictures is taken, I have to replay them for my audience, on the camera, which is now covered in muddy fingerprints.

Following my Pied Piper cavalcade round the camp it’s siesta time. In theory. My followers have set up position at the bottom of my sleeping mat, which is picturesquely sited on the banks of the Nile, a welcome breeze wafting. The children alternately sing, whistle, play drums or climb the tree sheltering us to rain down mangoes and secure some more attention. The mangoes are a little under-ripe but good and more tempting than my cold chicken, which defies all attempts to bite into it.

When  I do manage a snooze in the sweltering heat one of Duncan’s phones rings. He is conducting business on two of them at once. As I give up on sleeping and turn to writing, an audience forms again. The young boys are fascinated by the phone and the group swells as they insist on viewing a slideshow of all my pictures. The next doze is almost underway when one of the beautiful long-horned cows charges past bellowing.

Most of the cattle are taken further away to pasture during the day and they are driven back at the end of the afternoon, thousands and thousands of them streaming into the stockade, evening fires billowing smoke. It’s impossibly atmospheric.

Martin ferries us back across the Nile, simultaneously making an impassioned speech, explaining that the villagers are praying that Duncan will pay for an operation to fix his leg. Then he abandons us on the edge of the scrub. I’m filthy, absolutely covered in dust and mud, and I’ve taken 500 photographs today.