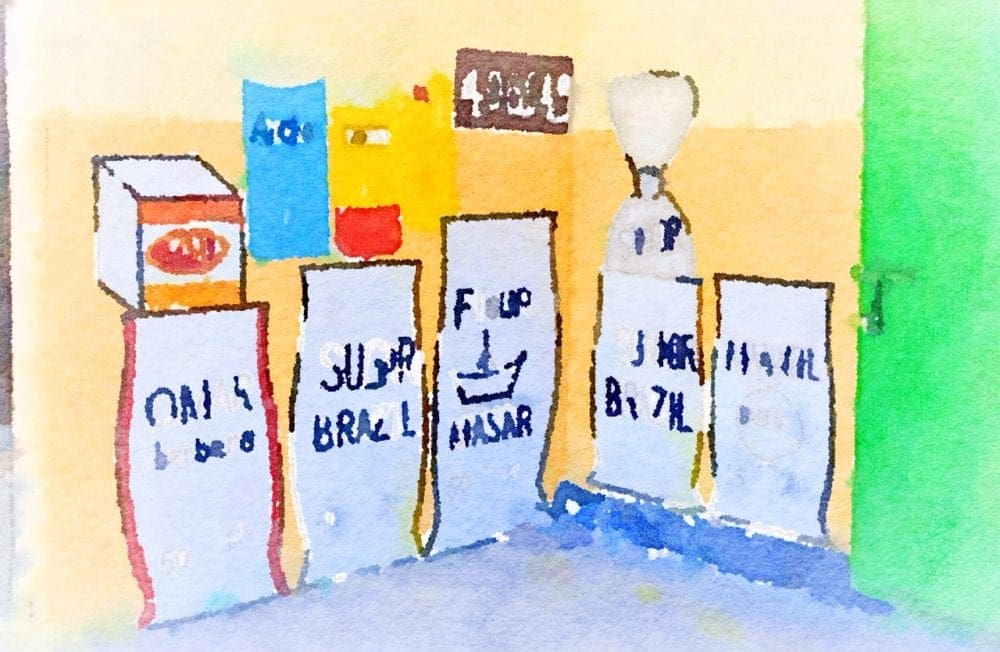 I've flown in from Djibouti. Hargeisa is dusty and mainly flat, dotted with small mosques. The only sight of any consequence is the bizarre independence monument – a jet fighter atop a pillar with bloody murals of the fighting.

The most interesting area,  fortuitously adjacent to my hotel,  houses the  vibrant  market stalls stretching into the distance as far as the eye can see. The best part is the street of the  the money changers. Here, the individual notes are worth so little they are bundled up and displayed in wire frames. I change ten dollars. Inflation is so rampant it will probably only be worth five tomorrow.

I’ve been met with a mixture of English greetings, smiles, frowns and consternation. The latter is mainly from women, who prod each other and point towards me. A woman in trousers! It's as if I’m walking around naked.

So I ask guide Badri to take me shopping again. He's told me not to go out on my own 'dressed like that'. I'm buying an Emirati style abaya gown in the souk. It comes with a free headscarf. The shops are fascinating. The little booths have English signage (mostly spelled wrongly) and are endearingly painted with bright murals that advertise the wares on sale. Simple but effective.

My accommodation isn’t as bad as I feared (especially when I saw the outside of the building) and my room is better than the one at the Sheraton in Djibouti. Though clearly that’s not saying much.

My bedroom has a balcony with a view across the square and the monument. I’m obviously not supposed to be utilising it though, as the bed has been placed across the door; I can only see out if I stand on the mattress and peer over the bedhead.

It has to be said that the food I’ve sampled on this East African trip hasn’t always been that tasty, or hygienically prepared. This hotel has a very fancy looking western style menu, but at least part of it is a total work of fiction. The waiter looks blank when I ask him about the smoothies and milk shakes on offer and goes to the kitchen to see if they have ever heard of such a thing; They haven’t. Last night’s roast chicken dinner (I thought I was choosing the safe option) turned out to be cold meat on the bone, with some hot mustardy paste ‘slathered’ on it, instead of the garlic butter I was promised.  I’ve tried to think of an accurate adjective to describe it, but the best I can do is ‘vile’.

Breakfast is frustrating. Fresh orange juice isn’t available, and my omelette just isn’t happening. I walk out in the end, but Badri is late and the woman on reception persuades me to return and comes with me, to give the staff a tongue lashing. There are raised voices in the kitchen. Eventually, a waiter comes rushing out with my omelette and promptly drops the plate. There are smithereens flying all over the floor. Mark 2 arrives only a minute later. But no sign of the avocado juice alternative that I was promised. Badri says the whole staff was replaced a couple of months ago, when the hotel changed ownership.

The streets of Hargeisa are much quieter in the afternoons. Badri says that the hours after lunch are for sleeping and khat chewing. Alternatively,  I’ve discovered an available and tasty option on the hotel menu - carrot cake.

Camels are the mainstay of Somalia - more per head than any other country in the world I’ve read. I’ve avoided eating camel meat whilst I’m here, though it’s often on offer - I think; it’s supposed to be very greasy. The camel market in Hargeisa is utterly fascinating - hundreds of the beasts, tethered, fighting, chewing, waiting for their respective fates.  Many of the nomad vendors here are friendlier than the townspeople, offering limited greetings and nervously trying to decide if they would like a photo taken or not. Again, the stock phrase, ‘Somaliland, once British Protectorate’. Again, said, with pride and to generate kinship.

The women congratulate me on my attire, but remonstrate that my hair is showing. ‘Do you have a goat on your head?’ They congregate under umbrellas, churning butter and brewing tea alongside their sheep, which are roped together in lines. White horned cattle are driven into a compound on the far side. It’s a fascinating spectacle, at least as rewarding, if not better, than its more famous cousin, the livestock market at Kashgar. It’s a good way to finish my trip.