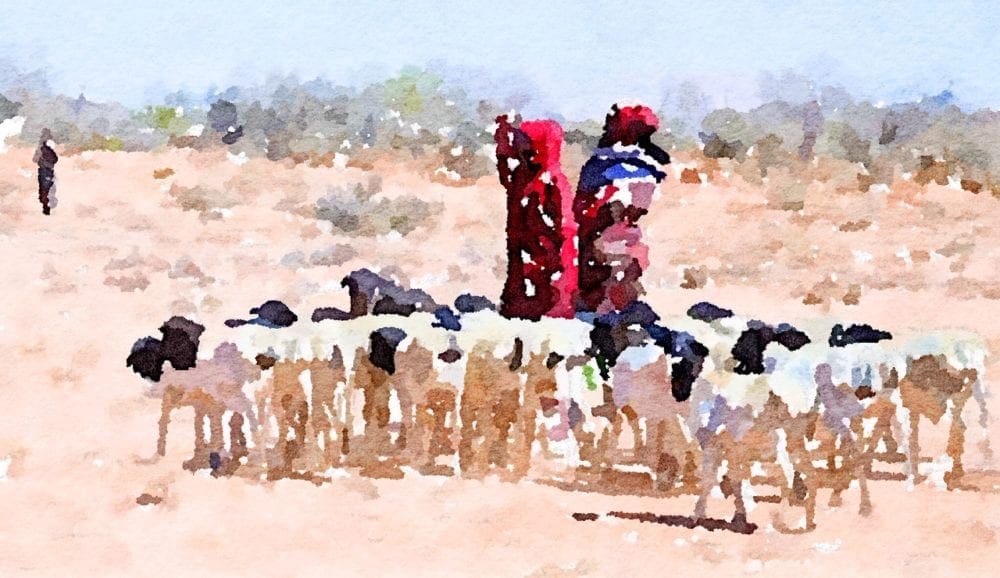 Ga'an Libah and Will the Rock Paintings of Somaliland Cut the Mustard? - Horn of Africa Part 7

Today, I’m bouncing over desert in Somaliland yet again, but this time on the road from Hargeisa with three men. Guide cum driver Badri and soldier guard Abdi have been joined by Mohammed, a professor of archaeology from the Ministry of Tourism. I’ve no idea why, as it’s cave paintings tomorrow. He’s brought his camera, so maybe he just fancied a jolly. The East Africans have a penchant for decorating their cars with hairy mats and this one has shag pile seating in back with sheepskins in front, even over the gearstick. It’s also left-hand drive designed, as are nearly all the vehicles here, even though the road is right hand drive, to align with most of Africa. It makes for interesting overtaking, with Abdi shouting directions.

Bedri has good English as long as you stick to very basic vocabulary- he's self taught. Abdi has a very limited repertoire of phrases and Mohammed speaks some English. But his accent is so thick I can’t understand a word he says. I’m not being consulted on in car entertainment. They are alternating wailing Somali music with very loud conversation. The Somali language is even more guttural than Arabic. Abdi sounds as if he’s gargling a lot of the time. Maybe he is. They’ve also bought khat, the local variant on coca, to chew, from one of the many roadside booths. The leaves are smaller than coca and it’s sold in spriggy bundles.  I’ve tried it, but it’s horribly bitter.

The desert here has greener shrub than in neighbouring Djibouti and a variety of succulents and little red to yellow sunrise effect sand hillocks appear, as we near the escarpment, of Ga'an Libah, which is our goal today. It must be glorious when all the aloes flower. The inducement for our journey is a view and a variety of wildlife. But the fauna must all have disappeared to Djibouti, where I was very lucky – there’s a few fleeting gerenuks and a solitary dik-dik. It takes three and half hours to reach a small gated encampment. Mohammed  points out everything remotely connected with colonial times on the way – he is very keen on British references -and there are old, very crumbling British buildings here in the breezier highlands.

We have lunch in a compound sitting on mats. The air is fresh and birds and papery white butterflies hover over head. Badri has bought supplies from the supermarket (as well as khat) and our feast comprises dates, Pringles and Nutella and peanut butter (together) sandwiches. We are joined by two Somalilanders who now live in Canada and the USA, also out exploring. Finally, I am taken to see the view from the top pf the ridge, across the green stippled desert and almost out to sea.  The sun catches dots of  tin roofs marking villages on the winding road, shimmering in the distance. ‘This is where the British drank their tea,’ says Mohammed.

We halt on the way back so Badri and Mohmmed can pray in the bushes. Abdi stays with me, still wielding his gun. 'Security,’ he beams, flicking khat around. He has a very cheeky face. We jolt back across the sand, all three of them singing tunelessly along to the radio. Mohammed arranges coats for me to rest my head on and tries to persuade me to sleep on his lap. It’s been an utterly surreal day.

We’re driving west in Somaliland today, along a road that is being rebuilt and extended to Ethiopia. The Ethiopians seem to have been very busy on the access to port front lately. The road has just been inaugurated and there’s a Kenyan media delegation in my hotel, filming the event. Then we leave the main ‘highway’ for another off-road desert rally driving experience. The scenery is not dissimilar to yesterday. Distinctive snow-white sheep with coal black heads form picturesque groupings under trees. The nomad tents in Somaliland are also igloo shaped, but covered in a faded patchwork of old clothes flung over plastic sheeting. There is also evidence of some cultivation – rows of umbrella like papaya trees, in orchards.

I’m off to see cave paintings . I’m not wildly excited – rock art has never done it for me before. And these are only billed as the second best in the country. The most impressive are scheduled for tomorrow. It’s Friday, so there is none of the customary nose-to-tail traffic on the pot holed tarmac and scores of camels are out grazing, by the wayside. Badri tells me that the smallest are worth 300 dollars and the largest 1200. I ask if wives are still sold for camels. He says sometimes, but he paid gold for his wife.

There are three caves with paintings, but the 7,000-year-old artwork in two of them has been destroyed by smoke from nomad fires. I’m still struggling to find the primitive pictures of giraffes, dogs and cows interesting, even though it’s incredible that they are so ancient. Badri agrees with me that the surrounding rock formations are much more beautiful. It’s an enormous cluster of striated boulders balanced precariously and artistically by nature. There’s no one else around, unless you count the plaintively bleating goats, whose rest we have disturbed. ‘Hello Sueooooooo’. I’m back in the Antarctic for a second. Badri says that there used to be giraffes and a great deal of other larger mammal life in the area, until the war. The animals (unsurprisingly) left and never returned.

A bodyguard comes in very handy at times. A man yells at me for taking a photo of his orange stall, but quickly changes his tune when Abdi appears, flourishing his rifle. The vendor is soon begging me to take a picture. I decline to do so.

It’s the number one rock painting site in Somaliland today, My abaya is certainly cooler than trousers, but something of a liability scrambling up steep slippy paths lined with thorns.

The paintings here are at least fenced off and guarded, although we are, again, the only visitors. There are several decorated caves, mostly formed by overhanging rocks, the red and white images better preserved and more detailed, cattle mating and men drinking from a cow’s udder. There’s also a proliferation of wild life (at last) inhabiting the rock formations: hyraxes, tiny squirrels, lizards and assorted colourful birds, including hornbills and the red breasted grosbeak (great name).

On to Berbera and the coast.