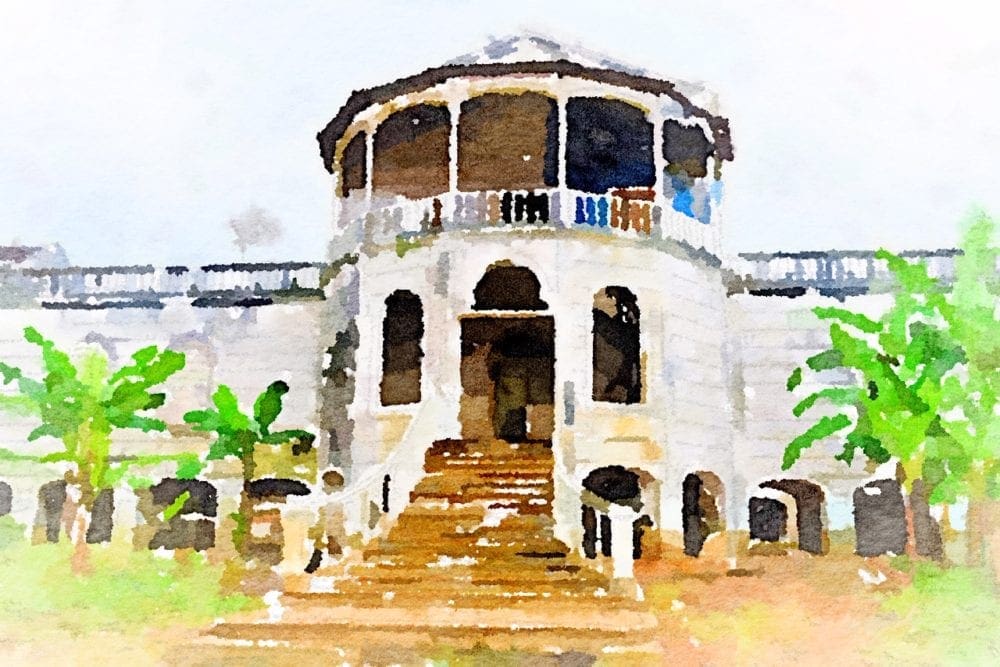 We’ve almost done a Round the Island of São Tomé Tour, from the far side of the south west to the far side of the south east and reached São João des Angolenes (there’s no linking road through the south). The islanders believe there were indigenous people here (the Angolenes), when the Portuguese appeared, though the Portuguese claim the island was uninhabited - they arrived in the north.

Driver Wagner has dressed up for the day, military style, in his old army beret, which attracts much attention from the children who come running to meet us at each stop. They gather round staring into the car and then sycophantically hand me flowers, smile and pose for photos. I fall for this scam the first time, when we visit the old cocoa plantation at Roca Agostinho Neto (named after the first president of Angola) and I buy them all lollipops. (I’m being a very bad tourist this trip.) They all lose interest the second they’ve laid hands on the goodies. Two boys are enterprisingly playing draughts with bottle tops, turned up or not turned to denote the two colours.

The old plantation is huge. It was once the the grandest plantation on the island. The Portuguese word for plantation or farm is roca and these rocas were often grand affairs containing whole villages and a hospital. The pink and decaying hospital here is huge (there's a museum inside now) with a grand entrance. It now leads to a squatter village of nearly 5000 people including the adroitly begging children. As Lonely Planet says, 'Agostinho Neto is now the grandest symbol of its decline' and is typical of many of the old plantations.

Agostinho has plenty of tales about the bad behaviour of the Portuguese owners of the various plantations and their cruelty; they’ve been immortalised in place names such as Wicked Person Bay. An alternative name for Sao Tome e Principe itself is The Chocolate Islands. They boast that this is the best chocolate in the world. The good news is that the industry is now being revived via several ecotourism projects.

The old roca mansions scattered over the countryside are fascinating, with their shabby chic peeling cement arches. The most interesting halt is at Agua Eize, where there is a whole village of at least a century old and still charming (through probably very uncomfortable) painted wooden workers' houses, still inhabited by the locals. The cobbled streets lead up to the remains of another once very magnificent hospital. This one is complete with ornate staircase entrance; the smaller hospital for the local  population is still to be found on the hillside behind it.

I’m staying in a converted sugar plantation house at São João dos Angolares. It’s not quite as grand as those in the USA or St Kitts, (hot water is elusive) but it’s been very nicely done out with wooden floors and periwinkle louvred doors and plenty of nick-knacks. And the dining room certainly has pretensions with its open kitchen and views across the bay. There are Philip Jackson style sculptured figures in the gardens and a gallery stuffed with modern art.

I’m eating lunch with an African tasting menu that has so many courses I’ve lost count. It’s all blobs of tuna and mango and baked banana with bacon. As well as chocolate, of course. The dishes are so tiny I fear I may still be hungry by the end, but the waiters keep on coming and  I’m almost replete when they're done. And then, as guide Agostinho explains, we get proper lunch – beans, rice and more fish. And two more desserts. I think I’ve already had four, but I’m not sure what counts as which.

I escaped the worst of the rain today, but it’s poured down all afternoon and shows no sign of ceasing in the evening. It could have been worse. It’s the end of the wet season (Agostinho says the rainy season lasts until the end of May and he seems to be expecting it to cease entirely on June 1st) and the forecast said it was going to rain every day. Agostinho also says it rains a lot more in this area. The veranda that serves as the restaurant would be gloomy if it wasn’t atmospherically lit by candles. The bats have followed me. They’re swooping overhead as I eat my dinner.

Agostinho turns up at eleven this morning. He says that’s plenty of time for the tour of the capital I still haven’t had. Admittedly I hijack the tour at that point by asking if I can see the Pico Cão Grande.  I’ve seen pictures which suggest it shouldn’t be missed. It’s a 30 minute detour further south but Agostinho says that’s no problem. It’s worth the trip,  a landmark needle-shaped volcanic plug peak that erupts from the jungle, rising dramatically over 1,000 feet above the surrounding terrain, and is crowned with cloud, like something in a science fiction film.

Wagner drives back to São Tomé  town at leisurely speed and then it’s time for our fish restaurant looking over the bay lunch. Again, they both take their time eating and enjoying themselves until I tap my watch. I finally get a whistle stop tour of the capital’s crumbling charms. The Portuguese founded the city in 1485, and São Tomé still retains much of its original flavour.

There are villas with peeling walls, four hundred year old churches, the pink president’s palace is a smaller version of the Casa Rosada in Buenos Aires, no photos allowed I’m told - too late), the heavily renovated in the last century cathedral, a couple of Art Deco buildings and monuments and two bustling and adjacent markets, one colonial and jam packed, one of Taiwanese concrete construction ( the Taiwanese have now been ousted as a presence in the country by the Chinese ). There's even a sprinkling of Art Deco.

Finally, São Sebastião Fortaleza, a museum combined, at the entrance to the port. It contains both religious art and colonial-era artefacts and is decorated with those blue and white azulejos. We emerge to find married Wagner flirting shamelessly with an attractive lady on the street corner. Now I know why he sports the beret.

Next stop, Libreville and Gabon.