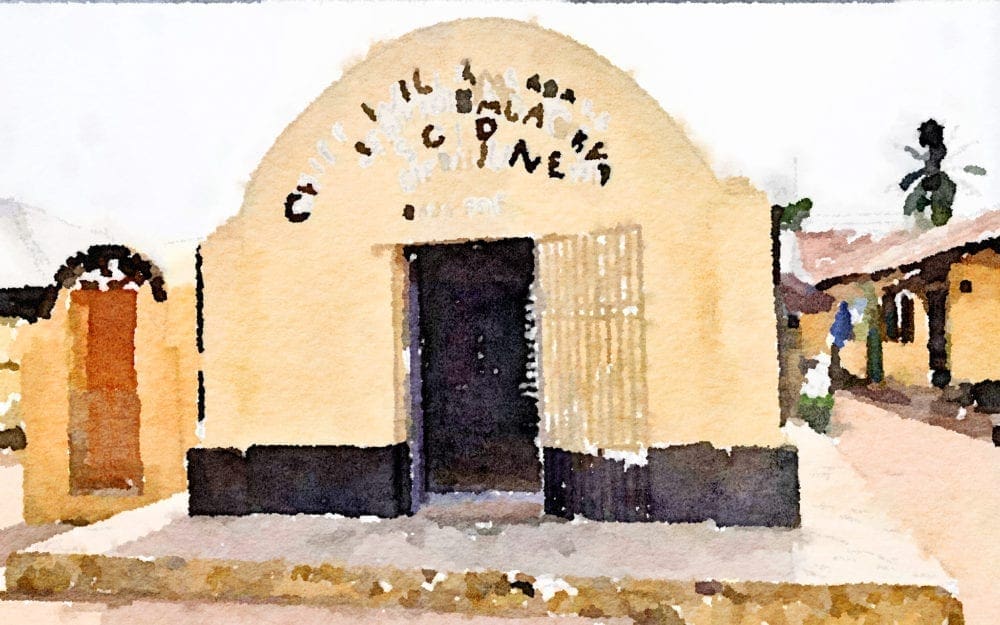 Badagry is the nearest thing to a tourist sight that Lagos possesses. It’s an old slaving centre.

I’m whisked off to the docks in Lagos Island and ensconced in a little speed boat, as Badagry is to the west, along the Badagry Creek off Lagos Lagoon for 43 miles, and almost at the border with Cotonou and Benin. This system of creeks, little islands and waterways is navigable all the way to Porto Novo. The boat has padded seats and I’m happily perched at the front of the boat with my video. So, I can get a good view, I think. Almost immediately we dip under a bridge into a boiling pot of foam. A cascade of water comes into the boat and I’m drenched from head to foot. So is my bag (again).

So, it’s not the most comfortable of rides - I can’t dry the back of my dress unless I take it off. There’s more chop, as other craft cut backwards and forwards, especially in the port area. Then it’s banks of palm trees and more fishing and boat building villages.

Badagry is another sombre reminder of man’s inhumanity to man. Slavery here was, in the main, organised by the Brazilians and Portuguese, who cooperated with the local chiefs to export slaves. The chiefs therefore became very rich and powerful. They also started to engage in what is known as domestic slavery to demonstrate their wealth. The more one had, the more respect one garnered. At the height of the trade in Badagry, the White Cap Chief Sunbu Mobee traded many of his own people with the Portuguese in exchange for valuables. His son abolished the trade in 1886. Today, the relics of the family’s participation in slavery and many of the tools used to capture and hold captives are found in one of the two privately owned (so you pay to go in) museums, the Mobee, Royal Family Museum.

The other is the barracoon of Seriki Williams Abass,. These are the original cells, where the captives were imprisoned and rammed into tiny spaces. Abass was captured as a slave by a Dahomean slave merchant (after whom he was named Abass) and sold to a Brazilian slave dealer (after whom he was named Williams), who took him to Brazil as a domestic servant. Abass returned to Nigeria on the condition of working with Mr. Williams as a slave trade business partner. He was very successful in his slave-trade business and is believed to have married 128 wives and had 144 children.

There is also the first Christian missionary’s house, an interesting juxtaposition. It’s possibly more famous as the first two storied building in Nigeria – though the sign says, ‘The First Storey House’.

The Point of No Return

On the other side of the creek here is Gberefu Island, the road to the slave’s Point of No Return. From the point of their capture, African slaves were grouped by gender and age, shackled with an assortment of chains and marched down the path.

Along the way is a well, bordered by a small wall, that discourages anyone from drinking from it. During the slave trade, the well is said to have been charmed by shamans and chiefs. Slaves on their way to the Americas were given water from the well to help them forget their home and cut their psychological ties to Badagry. It is said that the water would take effect three months into the journey, supposedly leaving the slave with no connection to anything but the lives they had been sold into. The locals claim that no one has drunk from the well in over a century.

There have been attempts to turn this into a national pilgrimage site, along the lines of Ouidah in Benin. There is paving along the road and a museum by the ocean, at the point of departure to the sea, but funding was withdrawn part way through; the building, with its modernistic design and sloping walkways is closed and dilapidated, sitting amongst a sea of litter.