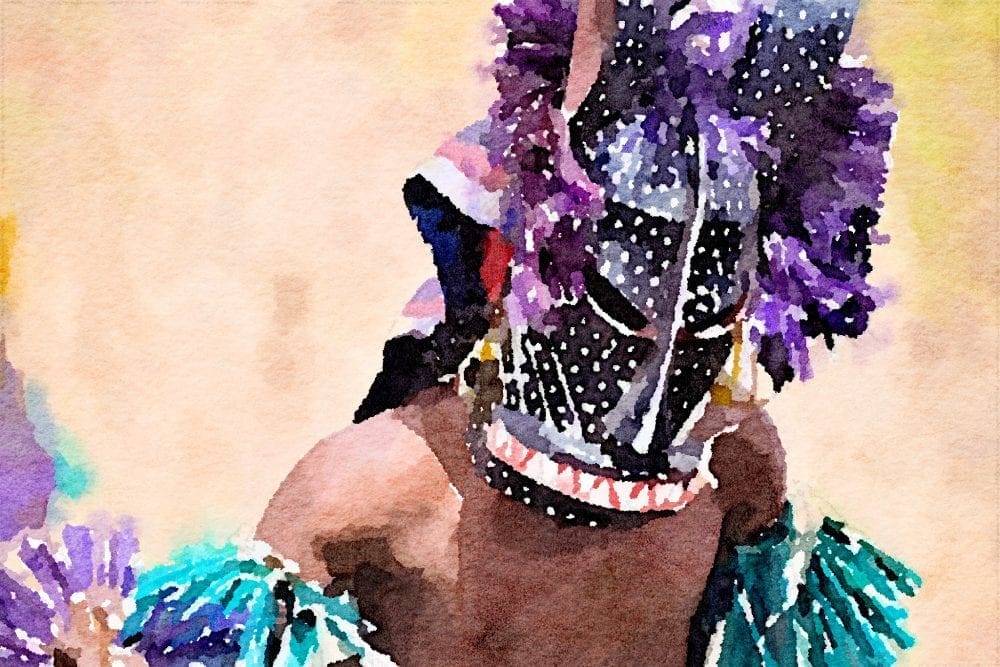 Terrorists have come uncomfortably close to Dogon country in recent weeks and it has now been deemed too risky to see. A visit to Original Dogon country - now occupied mainly by Mandingo peoples - has been substituted. We're heading for the so called Cercle of Kati in the Koulikoro Region of Mali. Ironically, the Dogons originally left this land, to the south of Bamako, to escape the pressure to become Moslem. There is a small, but steady, stream of Dogons returning to live alongside the Mandingo and bringing their dancing and ceremonies with them.

I've travelled from Niger to Bamako and this is my first outing in Mali. The village I visit is typical of those in the area with mostly rectangular mud houses and circular thatched granaries. Some of the village elders own concrete houses with running water and electricity. There is a meeting room for elders to discuss problems – this has a low roof so that everyone is forced to sit and no-one can stand up in anger

The performance is a sequence of Mandingo and Dogon dances. The Mandingo have orange robes and hats with lots of bright tassels. Well that's the men. The women wear white 'grass' skirts. They throw themselves into the dancing, arms flailing exuberantly and caper, in pairs, in front of the drummers.

I'm seated in the audience, under a canopy, with the elders, dressed in their best clothes and ornate hats

But the Dogon dancing is what I’ve come to see. The Dogons are famous for their ceremonial events, celebrated with traditional mask dances and the Dogon people have more than 75 different ritual masks.

They enter in a long swaying line, beating their own drums; the musicians peel off to stand to one side, they are wearing traditional triangular hats with pom poms at each side. And the dancers’ masks are colourful and extraordinary. One integrates a decorated pole that is at least three times the height of the bearer. The last performer is a stilt dancer; they all move with amazing dexterity considering their burdens.

It’s all over too quickly.  Everyone is exceptionally friendly, although I’m not allowed to touch the men or the masks, as they’re sacred and I’m a woman. And I wish they weren’t always so keen that the visitor should join in the shuffling line at the end of the performance.

The main town in this area is Sibya. It’s not very far from the Guinea border and has an escarpment backdrop that is, unsurprisingly, similar to the scenery I saw in north Guinea. But here the massif has been eroded into a variety of stunning crags and pinnacles and balancing boulders. Kamadjan’s Arch, I’m told, was created by a local king of that name. He hid in a nearby cave hermit-like, meditated and made sacrifices and then participated in a series of challenges. The first was to fire an arrow. It took one shot to create this spectacle; there is some debate as to whether he was assisted by black magic or not. Wikipedia says he carved it with one blow of his sabre. Believe who you like. It’s a very big arch.