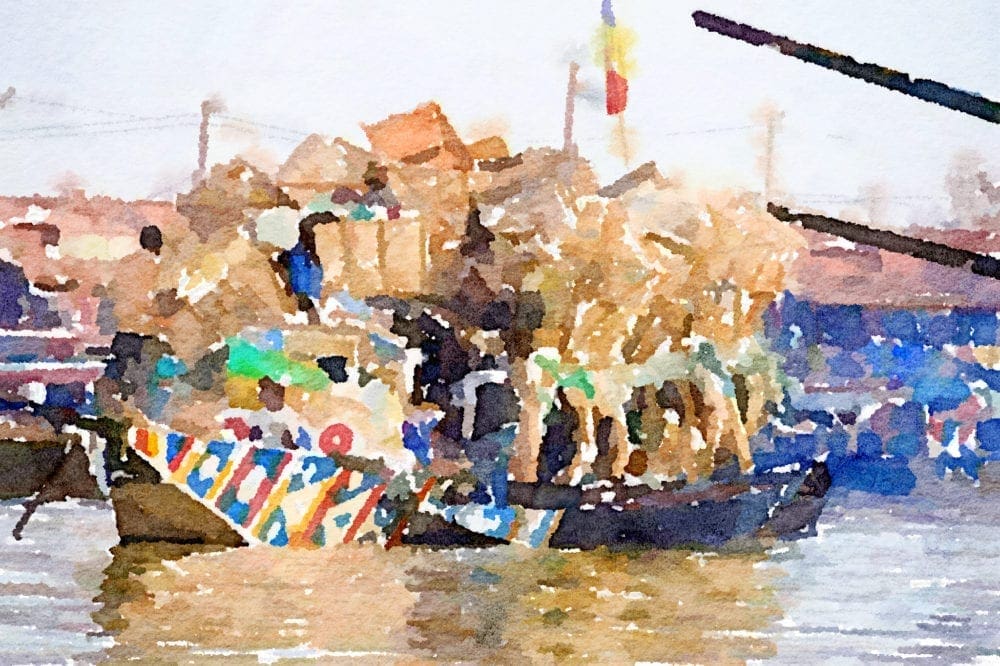 Mali - What to See in Mopti and Segou? - West African Journey Part 29

I'm travelling north from Djenne to Mopti and then back to Segou. The land on the journey to Mopti is yellow, punctuated by isolated escarpments, paddy fields and pools covered with waterlilies.

Mopti is a picturesque fishing port on another island in the Bani River, but it is linked by bridges and a very busy road. The Bani feeds into the Niger, just a few minutes down river. Most of the taxis here are horse carts, piled high with goats bikes and charcoal, as well as people.  Mopti has a mud mosque too, smallerthan the one at Djenne, but it’s main claim to fame are the many colourful fishing boats and the larger vessels transporting people and slabs of salt upriver, to Timbuktu.

Between Segou and Timbuktu, the gradient of the river decreases drastically and forms the Inner Niger Delta. The delta is approximately the size of Belgium. The decrease in the slope causes the flow of the river to slow, resulting in numerous marshes, lakes, and streams. When the region floods, during the rainy season, it creates excellent conditions for fishing and farming.

We take one of the covered boats (known as a pinasse) round the harbour and out into the stream, gently motoring along watching the toing and froing and dusk time casting of the nets as the sun goes down. We reach the meeting of the waters, where the Bani converges with the Niger before turning back. Some acquaintances of Ibrahim have joined us – refugees from Timbuktu. One of the brothers was kidnapped at the end of last year by the jihadists, held in captivity for two months and released one month ago. He doesn’t seem that distressed by his ordeal and says, as a fellow Moslem he was well treated. They just didn’t like him installing mobile phone masts - white man’s business.

Sevare is a United Nations security force base just outside Mopti. There are huge car parks full of trucks (and tanks) and my hotel is patronised by United Nations personnel. Mainly Russian men as far as I can gather.

Aaaargh - How Close Did I Come to Kidnap?

Were taking the road back to Djenne and then on to Segou. We haven’t gone far when the car breaks down. Clouds of smoke and the oil and battery indicators flashing red. It doesn’t look good. I feel very exposed sitting here on the edge of the road, not moving. Ibrahim is scaring me silly, shouting down his phone and at the world in general. Then he’s pacing saying ‘This is serious, this is very serious. There’re no other people around. We should keep you moving. Stay in the car.’ The Rescue Remedy will be coming out shortly. There are numerous horse carts rolling past, but no-one will stop to help push - Ibrahim is hopeful that a bump start will sort the issue in the short term. I’ve seen the smoke and I’m not so sure. Motor bike riding volunteers are eventually co-opted but sadly, I’m correct.

Rescued by the Army

Eventually, a rescue car and a mechanic arrive separately. I’m not sure how the rescue car has been arranged, but it’s driven by a soldier with an AK 47 and the seat covers proclaim they are for VIPs.  And it only takes us to the army check point, 30 kilometres outside Djenne. Ibrahim has gone into indecision mode; I have no idea what’s going on. He’s offering me options and then rescinding them almost immediately. Another hire car from Djenne? Fine. Nothing with a.c. Fine, we can drive with the windows down. No one wants to drive a car from Djenne to here. Public bus? No thanks, I’ve seen the driving. The car is temporarily repaired and can go to Segou, but we have to stop every few kilometres, so it can cool down. No thanks.

A rental car is found, and a price agreed. But then it transpires that the driver just had another job to do first. It will take him about two hours. We’re back to Yusuf driving slowly. A car will drive up from Segou to meet us. Then another car from the same company is on its way to Djenne and we will swap with them and take their car back to Segou. They will proceed in a rental car from Djenne.

I’m sitting in the army base, mud walls and sacking roof, waiting to see what actually happens. At least I’m less likely to get kidnapped from here. I hope. The solders eat their lunch (lucky them), stretch out and snore. Eventually the car arrives, but no, the occupants refuse to get out and wait for the rental car from Djenne. I have to stay here till this car has gone to the river and returned. Needless to say, the rental card driver has lied about his whereabouts. He’s not even on the ferry yet.

Finally, at two o’clock we’re on our way to Segou. Ibrahim is driving and sulking because I’ve told him I’m not very happy about proceedings. Especially the being terrified part. The original driver sits in the back snoozing - more snoring. I try and do the same, after a very late lunch. Except he’s now awake and talking very loudly in my ear.

Segou is reached just as the sun is setting. My hotel is on the river, the room is teeming with mosquitoes (‘Why are you worried - it’s not malaria season?’ asks the owner, and the Wi-Fi is down. There are some residents working for UNICEF there. They tell me they’ve been strictly forbidden to travel north of Segou and wouldn’t dream of going to Djenne or Mopti. There have been attacks on the Mopti road this week.

Ibrahim’s touring me in a pick-up, while they, hopefully, repair the car. The colonial quarter has Arab, almost mogul style buildings, pastel coloured and well-spaced out, in a pleasant area. Each one is named after a region of Mali and now they’re used for administrative purposes.

Downtown is the usual colourful bustle of markets and rambling open shops. There’s a Christian quarter with a solid gold coloured church. The riverside (I’m properly on the Niger again) is the most fascinating part, with boats unloading salt, wood and sand onto donkey carts, alongside the fishing village. Adobe houses are being rebuilt in cement blocks. Not nearly so picturesque and not so cool either, but considerably cheaper, as the walls don’t have to be repaired each year.

The Artisans of Segou

Then the artisans of Segou. A family millet brewery (there are several in the Christian area) potteries along the riverbank (the famous annual festival site is just up from here) and calabash decoration (red hot pokers are used, the fires kept hot with small fan belt bellows). The mud cloth production is the most interesting. The beautiful geometric designs are based in local message symbols and created with natural dyes. Glue is used batik style and the patterns are painted on in mud, which combines with the dyes to create black shapes.

A Pinasse on the Niger River

Later, another pinasse trip along the frenetic riverside where washing, boat loading, pottery making and fishing all take place. There are a couple of very flat islands. People live out here in straw dwellings when the water is low. The cattle are swum across - sheep and donkeys come in boats. This is also a centre for mud brick making and they are laid out on the banks in neat rows. Five hippos watch us warily from a distance. They are right to be cautious. They shot one not long ago, as it killed a fisherman. The sun goes down over the islands.

I’m told the car is recovered enough to go to Bamako, where it will be properly repaired. The right parts aren’t available in Segou. If there is a problem, they will get another car out. This isn’t totally reassuring. It’s a slow journey, at a steady 80 kph to nurse the car along, even though it’s now a very good road. And there’s rather too much vibration for my liking. Ibrahim says it’s the road surface. It looks pretty even to me.

We stop at Segou Secoro, the capital of the Bambara kingdom, established in the mid-1700s. They’ve restored the old adobe palace, with its seven chambers, and there are two delightful little mud mosques. Also, children on every corner chanting ‘cadeaux’ with outstretched hands. There have clearly been a lot more visitors here.

Back to Bamako and then Nigeria.