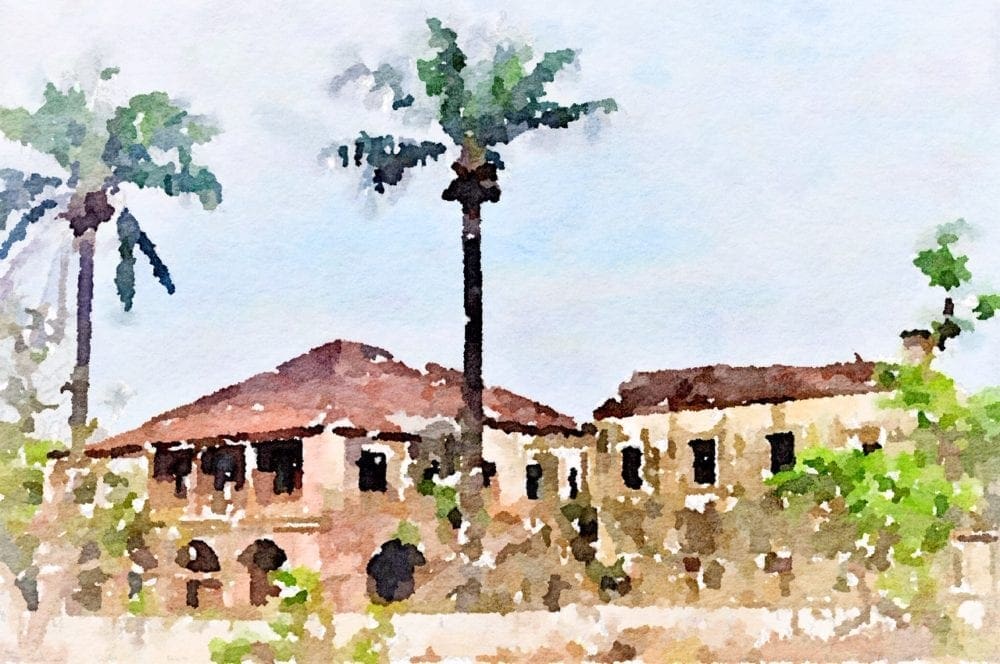 The Bijagos Islands – the Jewel in the Crown of Tiny Guinea-Bissau? - West African Journey Part 12

There are 88 islands in the Bijagos Islands, floating in the huge Geba River estuary off Bissau. Even in a high-speed boat coming from mainland Guinea-Bissau it takes 90 minutes to reach the largest cluster of low-lying palm tree covered dots.

Apart from the lumpy pillows and the spluttering from the DDT last night was fairly uneventful. No breakfast, despite the good cook - they sent a boy out for provisions and he didn’t come back until we were about to depart. I discovered that guide Mountaga had only requested bread anyway, which he eats - and I don’t, so wasn’t in the mood to wait while he partook.

Suga – A Less Than Auspicious Start

The first Bijagos Islands encounter is at Suga, where we moor up for a visit, to a 'friendly village'.  I’m told our destination is a half hour walk. We amble up a path past a few islanders who view us suspiciously, from a distance. The track is lined with vegetation and, more for lack of anything else to do than with any other reason, I take a photo of a palm tree ahead of us. A guy in a white cap appears shouting furiously and gesticulating. It seems that I have taken a picture of ‘his palm tree’. I delete the photo, but he continues to rant, and we depart. Not such a friendly village then.

Fortunately, Ponta Achacha, my home for the next three nights, on Rubane Island is gorgeous. Beautiful bungalows on a lovely beach. I have my own sunbeds on the sand, with my own grass umbrella and my own  terrace with couches on it, in case I get bored with the sunbeds. Lizards bask in the seat on the steps, scuttling under the bungalow when I approach. Excellent food too. Shellfish galore and even decent steaks.

You win some and you lose some. The group of noisy Israelis from Casamance has just arrived. Fortunately, it’s only for one night. And I haven’t detailed all of Mountaga’s indiscretions. But he’s just lied blatantly to me about the whereabouts of our boat, when I realised some of my stuff was still aboard. He was busy with beer at the bar. Then, another tantrum in which he dismissed himself, so I took him at his word and requested another guide. He has unfriended me on Facebook.

Bubaque, The Capital of the Bijagos Islands

New guide Innocencio and I, arrange a boat trip to Bubaque, the neighbouring island to Rubane and the capital of the Bijagos Islands. There are some decaying colonial buildings and the candy coloured palais de justice. I constitute the whole of the formal audience for a dance performance in the street (plenty of townsfolk applaud from the side-lines) - an initiation ceremonial that involves warlike behaviour and the ability to manage sacred cows – I think. It’s called the Baca Bruta and again, it’s unlike any dance I’ve ever seen and involves complex wooden masks. The children shriek and retreat when the cows charge at them, brandishing their horns.

With trepidation I’m attempting another Bijagos Islands village visit, but this one, to a settlement on Canhabaque Island, goes very well. It’s a scenic approach through mangroves. There’s a netmaking collective operating at the muddy landing area, which makes things interesting for the locals as they weave in and out of the nets, loading the thrice weekly pirogue that transports their stock to Bubaque. Getting the goods to the vessel, down a two-kilometre track, is mostly the job of the children, who roll barrels, perch buckets on their heads and squeeze large bundles to their chests. On closer inspection these turn out to be live chickens or drawn rats. One of the rats proudly displayed is as big as a piglet. Innocencio says they’re a delicacy in Bissau.

It’s a large village of mainly square dwellings. A couple of groups are deployed on house building, adding water to the ground to make mud, which is shaped into large bricks. using wooden moulds. They are laid out in rows to dry. The people are friendly; it probably helps that Innocencio is at least six foot six. Children, shy at first, tag along. The three- and four-year olds are in kindergarten, beautifully behaved on plastic chairs, eyes on the blackboard. The tag alongers become even more friendly, wanting to hold hands, when they see sweets being dispensed and trail us all the way back to the boat, tugging in turn at sunglasses, watch and bracelet, rolling huge expectant eyes.

Time to leave the beach and the Bijagos Islands First, the old Portuguese colonial capital on the island of Bolama and then onto the new one, Bissau - it was moved in 1941. The once beautiful Portuguese buildings on both though are in a sad state of repair. Even the huge neo classical palace on the main square in Bolama has been left to crumble, vegetation in every nook and cranny. Incongruously, there’s a statue of American president Ulysses Grant in pride of place here. He’s a Portuguese hero, as he intervened in their favour when England laid claim to the area.