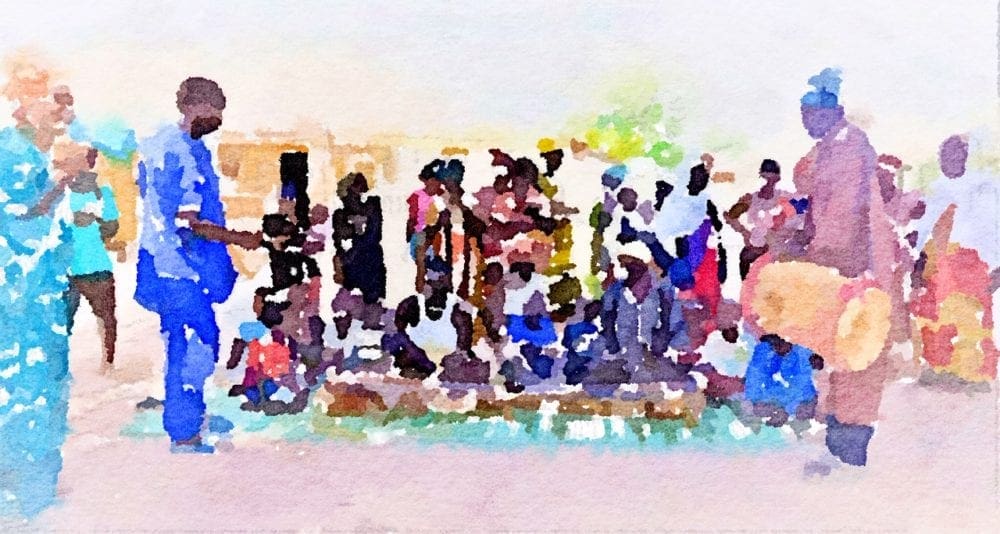 The crossing of the ocean from the old capital, Bolama, to the current capital, Bissau isn’t exactly comfortable. The open boat pitches and bangs, and every so often I’m sprayed with saltwater. Innocencio says I’m lucky; it’s usually worse than this and everyone gets absolutely soaked.

This being a country of Portuguese influence the caipirinha is a popular drink. Innocencio buys us one each from a fast food bar. He explains that he feels he had to buy something as I went and used the toilets. What else other than a cocktail at eleven in the morning? It’s very good and comes in at less than a euro.

So, the old part of town, more very faded Portuguese town houses, grass growing in the gutters, the Fortaleza, the Presidential Palace (no photos allowed), the Peace Monument and the bustling market is viewed through a soporific haze. This is a very poor country and there is little (other than the palace) that appears to be well maintained.

Innocencio is departing today. He only filled in for the recalcitrant Mountaga, but he’s done a good job. At our last lunch together, he tells me that the British are well regarded here. If someone is strong, they are described as ‘Britanicos.’

My hotel is the old barracks for high ranking Portuguese officers. I’m not sure it’s been decorated since then.

I have another new guide, Augusto, a new driver Maladho and a lovely big, if slightly battered Landcruiser. The air conditioning leaks and drips on my feet, as well as anything else I leave in the footwell. I’m being transporting east towards the border with Guinea-Conakry. It’s more paddy fields, more oblong houses and more road peppered with huge potholes, so we’re spending more time teetering on the crumbling verges than on what remains of the tarmac.

There are also more police checks today and the officials are being more ‘rigorous’. Lights, hazard lights. fire extinguisher. Christmas is coming up and their pay is poor. It’s in their interests to find something wrong and it’s slow progress. (The teachers haven’t been paid at all this month, so they’re going on strike.)

Bafeta is the second city in Guinea-Bissau. The word Bafeta means high tide; it’s at the beginning of the huge Geba estuary. Bafeta has another abandoned old town and the balconied dilapidated houses even have a dovecote looking onto the river. And there’s also a deserted Arab style market, crenelated pink walls and tiered shelving inside. It would be a perfect place to display the goods now on offer in the roadside stalls alongside the main road, the vendors squatting in the dirt with their wares.

The Malinke region is the home of the griots, traditional musicians and storytellers. In a village here I witness a performance - xylophones with calabash sound boxes, tom toms and dancing. The story is told modern style, using a megaphone. And the women all dance, the young girls wiggling their hips with rather too much skill and enthusiasm. It’s great fun. As before, the whole village turns out to watch and I’m the one and only visitor.

A seven-a.m. start with a chilly rising sun as it’s going to be a long day. The villagers sit in large circles round their fires drinking coffee and chatting; it seems a pleasant way to start the day. Everyone I’ve encountered since Suga has been extremely friendly. The majority tribe round these parts are the Fulani and they seem overjoyed when we stop to poke around their traditional circular thatched houses ( very low doors at times) and very happy to be  photographed digging mud for bricks or sorting peanuts, the ladies clad in bright cotton, with peplum style tops and matching knotted headscarves  Two small babies are proudly brought out for inspection and carry on sleeping throughout proceedings.

Breakfast at the frontier. An onion omelette cooked over hot coals. And across the border to Guinea-Conakry.