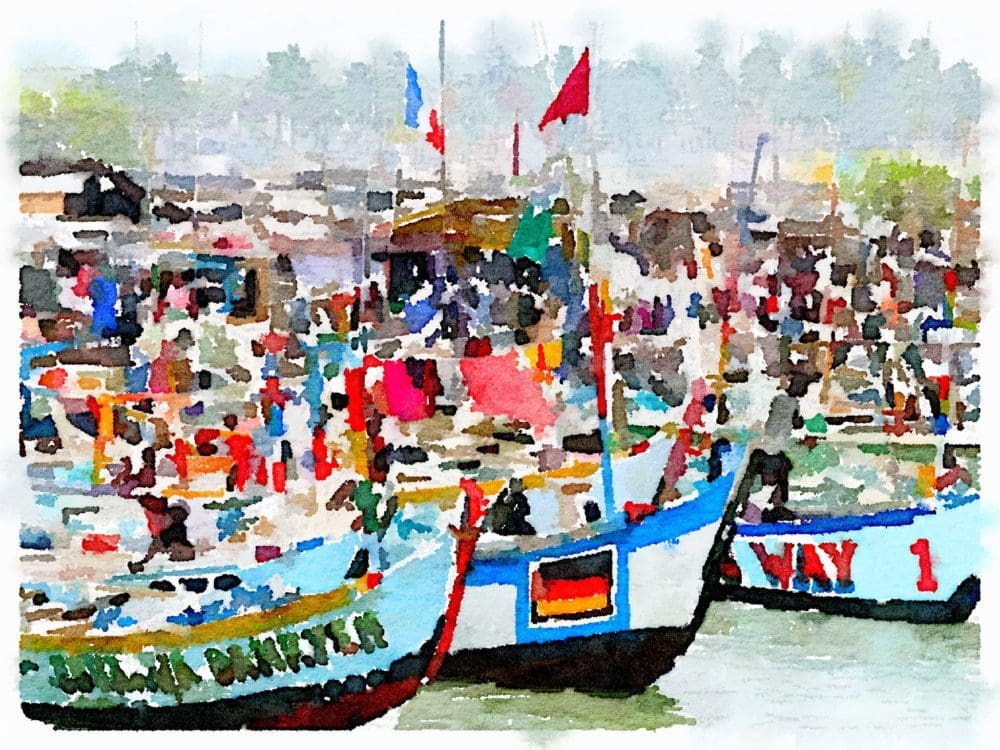 Ghana - Part 3 - Kumasi and the Coast

From Bolgatanga to Kumasi

I've had stomach problems for over a day and I'm still feeling awful, but decide to still travel from Bolgatanga where I've been working, to Ashanti country in Ghana, which turns out not to be one of my better decisions. I have to pay six times as much as everyone else to get my luggage stowed away. The 'air-conditioned' minibus is driven by an accelerate/brake merchant. The air conditioning has broken down. I sit next to a guy who seems determined to get two seats worth for his money. Behind me is a toddler who wiles away his boredom by trying to work out how many ways he can strangle me with my seat belt.

The bush gradually gives way to rainforest, and bananas and pom poms on tall knitting needles signal the first palm trees. Mud huts are now square mud with tin roofs. there are hoardings: Goat Flavour Stock Cubes, Two Seater Water Closets Made Here, St Anthony’s Catholic School, Oxford., Funeral Dressing Here, Cadbury’s Choco. On the radio there's a sports round up. It’s all about Chelsea and Arsenal and  the Number 1 Accra team - Hearts of Oak. The road seems to be under the course of construction most of the journey. Or has it just disappeared? It's red and slippery. The toilets on our one stop are close contenders for worst in the world (the winners are in China). After six hours I’m a queasy quivering wreck. Another taxi driver who thinks I’m beautiful and wants to visit me in England. It doesn’t stop him overcharging me. My hotel seems a contrasting haven of tranquillity. The rooms are clean and large. There’s a swimming pool and a large computer room. The staff are delightfully friendly and helpful and send out to the pharmacy for a rattle of pills for me.

My trousers are definitely a more relaxed fit . Ghana has to be better than a Health Farm if you want to lose weight. I gird my loins and go out in a taxi to buy a bus ticket for tomorrow’s journey to the coast. Kumasi is spread over several hills. The roads are still under construction here too. This taxi driver circumnavigates by driving off road and on pavements where possible. There are no bus tickets to be had. I negotiate with the taxi driver. He says he will take me to the coast for 600,000 cedis. The receptionist is shocked. She thinks it’s daylight robbery but it’s the same price as a taxi to Gatwick from home. And at least I can stop it if I feel sick. I'm too shaky to wander around and most of the town is closed today anyway (I'm not sure there’s actually much I want to see).

I have read all my books and the hotel has none. The internet is so slow I run two PCs at the same time on different tasks. Although there is a satellite magazine there is actually only one tolerably visible channel. I watch an amazing Nigerian movie (its Nollywood here) called A Serious Mistake about a guy who goes to Europe to make his fortune. It’s complete with cavorting witch doctors who help his brother steal all the money he sends home. Eventually, the hero returns wearing a snappy suit and sunglasses and all is well.

More blistering speed trials as my taxi thunders to Elmina. Streets stacked with huge rusty truck engines, heaps of not exactly shining wheels, stalls loaded with taxi sign prisms and miles of cocoa plantations. This is the home of Cadbury’s chocolate. Flat scenery at last becomes typically equatorial fringed velvet hills. Tin roofs give way to palm thatch. And my head is finally beginning to clear. The sun comes out and I glimpse glistening waves in the distance. Africa is redeeming herself.

The south is more prosperous and has fewer potholes. There are road signs, place names, directions and even some tourists. Coconut Grove Resort has manicured gardens, a swimming pool and assorted servants waiting to do my bidding (though they have to be summoned from the snooker table to do so). One of the servants, bids a lesser servant fetch me a coconut. Straight off the tree of course. The beach, if not white, is beautiful, suitably lined by the mandatory swaying palms and there is Atlantic surf thundering on rocks. The garden abounds with the usual wildlife, though the lawn mowing goats are accompanied by three horses.

Jojo is my hire car driver. He has a really smart car with an intact windscreen. So far Jojo has driven carefully, been very polite, not put forward any matrimonial proposals and not made any demands at all for extra money. In fact he has been grateful for what I have given him. I keep resisting the urge to pinch him to make sure he’s real. Today he takes me to see the slave forts at Elmina and Cape Coast. The buildings are amongst the oldest in Africa and are amazingly photogenic. Whitewashed, criss-crossed by palms and surrounded by frenetic fishing harbours. Their stories though are gruesome and the depressingly dark images of humanity evoke emotions reminiscent of visits to Birkenau, Saigon and Hiroshima.

The colonial towns are picturesque and bustling with colourful fishing communities along the harbours. Ants’ nests of painted boats scattered with myriad bright rags of flags and heaps of spiders’ web nets. Kilns and latticed smokers full of small shrivelled silver blobs. Tented huts, bubbling pots, still more foraging goats, and babies in their slings, peeping round their mothers’ shoulders, toes pointing to the sky. All scattered along the mud and slurried rivulets of the lagoon. Decorated boats glide in carnival procession to unload wriggling baskets and the quay is ankle deep in slithering clay coloured life of all kinds. The button on my camera is working harder than it ever has before. Magic.

Seeking out reading matter I forage in the local bookshops. There is very little to choose from. Biblical tracts and school text books. I say I would like a story book. Then the girl unearths a battered copy of Shakespeare's Julius Caesar. “Have you read this one?”

Lobster, garlic butter and rice for supper. Tomato paste is offered. And even the TV has upgraded. B list American movies are on offer.

A very long day trip to the border with Cote D’Ivoire. A string of classic picture postcard beaches and a sea of rubber plantations and a lazy trip through rainforest backwaters in a dug out canoe. Well, a leaking rowboat that is paddled. We have to bail out with half a plastic basin. But it is still idyllic. Warm (the sun has stayed with me ever since I hit the south), tranquil. Green lily pads dotted with white spiky heads and dragonflies bobbing. Skimming across a lagoon to the stilt village of Nzulezu. The occupants are mainly sprawled across the decking “sleeping”. The chief “answers our questions” but is clearly only interested in “donations for the school”. The school is in much better shape than the ones in Bolga. The blackboard has paint on it.

I’m beginning to think that the tourist industry in Ghana might be worth developing, but Africa is consistently ready to shoot itself in the foot. A series of police barricades, the officials blatantly seeking bribes as they discover or manufacture minor driving offences. Jojo is allowed through all morning but one officer, unbeknownst to me, confiscates his photocopied driving licence. On the return journey we are twice detained. In the first instance I feign a lack of understanding as a smiling face asks if we are carrying “refreshments for our trip”. After a few minutes he gives up and lets us go.

The second instance is much more serious as the policeman is giving a prison warder impersonation. At first I leave Jojo to deal with it, but he clearly cannot and is becoming distraught. He is being threatened with court, simply because he does not have his licence. The policeman keeps disappearing with his documents threatening to “process him”. He clearly wants money but I am damned if I’m coughing up to this po faced bully. Waiting it out isn’t working and Jojo is beside himself, so I pursue the guy with my pen and notepad, catch him actually counting his bounty from the last victim and request his name and number. “Why do you want it?” his accomplice asks. “To give to my friends in Accra” I improvise wildly. He stomps to his “office”. “I’ll deal with you in a moment.” Their hut door bangs shut. Then it opens again and the documents emerge. I tell Jojo to get the car out of there–quick. He is very impressed. So am I. And a bit shaken. For all I know they could have carted us off and locked us up.

There are hundreds of weaver bird nests suspended from the palm sky scrapers. When I walk down to breakfast the birds swarm out frantically cheeping, though the waiting buzzards perched on the fronds above are surely much more of a threat. Every day the grass is littered with fallen baskets.

All day on a sunbed by the pool watching solitary Africans balancing loads on their heads along the edge of the crashing surf.

The lizards and I are basking together. I abstain from press-ups though. The monsoon clouds are sitting just to the north of us all the time while the sky over the sea stays blue. Very clever.

Every night one of the guys brings a flower to my room “to help me sleep well”. As he departs he inquires “is there anything else I can do for you?”

Nothing else to report except that the TV, whilst promising much, has given up the ghost, except for CNN, so I am now an expert on liquid explosives.

My last night at Coconut Grove so I decide to reprise the lobster. Lobster is finished. Oh well. Gordon’s Spark then.

To Accra. The pyramids of produce piled by the road still changing, green oranges to yams to coconuts to pineapples. Baskets of eggs are flourished hopefully. The prosperous roads in the south turn out to be a blip around Cape Coast and potholes and road construction are the order of the day till we hit the traffic jams of Accra. On the way we meet a procession trailing car engine parts and beating on drums. They all wear football strip and are dribbling balls. it's the funeral of a football player.

Jojo’s halo slips a little. He has brought his business plan and is plainly disappointed by his tip even, though according to his business plan, I have already given him double his monthly salary in extras this week.