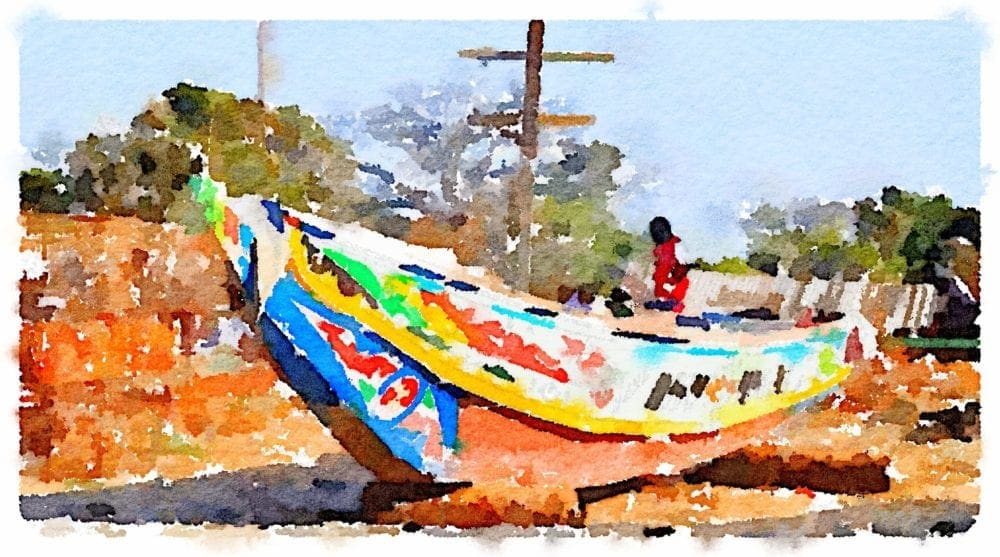 Home - Stories - Africa - Gambia - What to See and Do in the Gambia? - Gambia and Senegal 1

What to See and Do in the Gambia? - Gambia and Senegal 1

Serrakunda is the largest town in The Gambia (bigger by far than the capital Banjul) because it is formed of nine villages which have expanded into a larger urban area running along the coast. This is where most of the hotels are; there is a lot of building work going on, as the tourist business continues to grow. Off the beach it is a maze of dusty streets with a typically noisy and dirty, but vibrant market.

My Serrakunda hotel, perched on a cliff, is charming, boutique style, slightly frayed round the edges if you look too closely, (let’s call it shabby-chic) with a swimming pool and great views over the beach. The sandy shore, wide and brown, the sea a dull grey, but there are some interesting trees along the cliff edges, dry, spiky sculptures and gaily painted fishing boats to watch. Clouds of shrieking seagulls hover as the catch is unloaded. Serrakunda Beach is best viewed from a distance. There’s plenty of space to lounge and sunbathe, but there are also a large number of locals selling or just wanting to pass the time of day. They are friendly enough, but persistent. It’s understandable, they are poor people, but interaction is exhausting, limiting forays onto the sand or out to the local markets.

North to Saly, in Senegal, after this stay.

On the River Gambia

I've chosen The Gambia as it’s more or less the closest place to the UK where sunshine is guaranteed in February. It’s certainly warm and muggy, so shorter excursions are called for on this count too. Gambia is renowned for its bird life and an early morning boat trip along the Gambia River is one of the most popular trips. It’s very serene, if unremarkable. There are egrets and herons and the odd flash from the tiny iridescent kingfishers. The monkeys and baboons are more lively, a huge troop engaged in a battle in a forest clearing.

Crossing the river on the ferry is a very different adventure. Read about it here.

There’s a variety of restaurants and bars especially on Kololi’s crowded beachfront strip,. They vary from the chic and gourmet to lively and very English. The taxis are efficient, even if you have to check the fare carefully. Here, there are some more up market hotels like the Karaiba, with its pavilions and designer food. It’s not a bad place to spend a few sunny days in winter.

Banjul, Capital of the Gambia

Banjul, the capital of the Gambia, is a warren, with a more substantial market than Serrakunda and some fiendish traffic. I climb an arch for a panorama of Banjul. There’s a mosque and a few colonial houses and a museum. I decide to pass on the museum.

When I finally reach my hotel, on the beach in Banjul, I’m happy to flop out on a very nice stretch of white sand. It’s carefully fenced off, of course, to prevent the hawkers coming too close. Music blares incongruously as I luxuriate in the heat. ‘I’m dreaming of a White Christmas’. It’s nice to be able to speak English again, but this hotel is not really my style. This one is more than a little frayed at the edges. Half the lights and the fridge in my room don’t work. And all the meals are buffet style. The food is all cold even when it’s presented in chafing dishes and highly unappetising. The clientele is mainly European and clad in shorts and lurex hoodies. And I’ve collected my first mosquito bites this trip.

South to Senegal next.