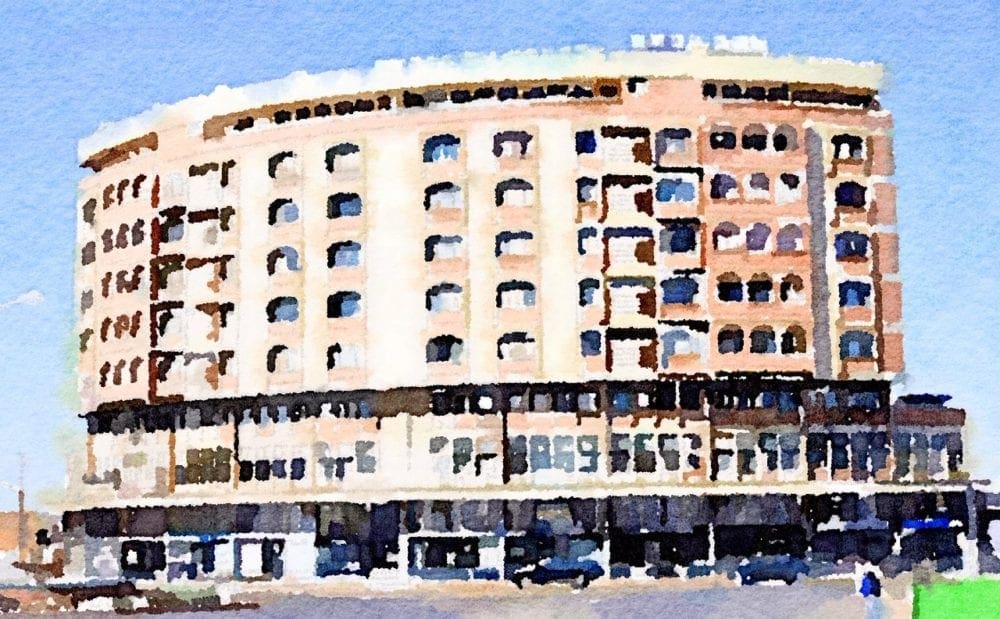 Although faded and in need of a little TLC (especially the roads), Asmara, the capital of Eritrea, is a very welcome surprise. It’s one of the most fascinating African cities I’ve visited. A slice of Mediterranean Europe deposited by the Red Sea and liberally sprinkled with art deco features. there are multiple delightful buildings, with angled towers and curved edges, porthole windows, tiny metal framed glazing, and stylized lettering

Some of the churches, have bell towers and domes that look as if they’ve been lifted from Bologna. Others are so highly decorated as to be almost Disneyesque, though the blue sky frames them admirably. The spires are deployed pleasingly in groups across the hills. At one point there’s a view down a busy steep street edged with stallholders, that makes me think I’m in colonial Spain. The whole of the city has been designated a UNESCO world heritage area.

The architecture makes Asmara a worthwhile visit on its own, but there is more. Next, the old town, with a maze of workshops to wander through. Chilli is being ground by cheerful head-scarved women and decanted into sacks - the air is chokingly thick with dust. That's not the only threat to life. Clouds of sparks emanate from a long, narrow alley where welders are at work on assorted ironmongery (no goggles) and furnaces roar in the furthest corners. Just down the road, there’s a huge open sided market, the roofs supported by carved pillars. It’s crammed with sacks of spices. I have an impromptu tea party with some of the women selling prettily arranged rows of fruit and vegetables.

Further along, an imposing green tiled mosque, (I’ve never seen an art deco mosque before), the fish market and the meat market.

Asmara is also known as Piccolo Roma. I wouldn’t go that far, but there are Palermo type avenues of pollarded jacarandas and neat palms. Asmara’s colonial heritage is also clear from the multitude of Italian eateries. Though, as in most of the world now, there is plenty of English signage.

I’ve not met any other tourists yet. Or, (knowingly) any secret police. Apparently and unsurprisingly, those that do come are mainly Italian and this nationality is favoured by those who issue all the necessary documents to travel out of town and visit this and that. I tell Fessehaye I would like a picture of the cathedral unobstructed by the huge iron gates. (I can’t poke my camera through them). He manages to persuade the gatekeeper that he is an old friend and he opens up. But another voice emanates  from up on high as I’m venturing in. ‘Is she Italian?’ ‘Yes,’ lies Fessehaye, hissing at me to be quick.

The same ploy doesn’t work at the brewery, which has the most incredible glossy brown and white tile work. They want to see my permit there. Fessehaye instructs me to take a picture as he reverses away. I’m glad this isn’t the DRC. The streets are quiet, other than a few old Toyotas and the odd bicycle, so I can even wander around with my camera without worrying about being knocked over. It’s an absorbing afternoon and I forget all about being tired.

My hotel reflects the city. It’s quiet, full of character: ormolu, drapes, walnut bureaux, candle-lights, mock marble and replica Greek pillars; it’s just a little worn around the edges. Most of the candle-bulbs don’t work, or are missing altogether, the old Amstrad TV won’t operate, the water is lukewarm and the miniature bottles of body lotion and shampoo are about a quarter full. Wi-Fi is a precious commodity which operates at snail pace; it’s only available in the lobby and no passwords are given out. Autojoin is also cancelled, so every time I come back the ladies at the desk have to reconnect me. It’s a tedious business for all concerned.

I was too hasty in  saying the hotel was quiet. At night, dogs howl outside, when children aren’t squealing, the corridors are suddenly full of guests holding loud echoing conversations and some birds are billing and cooing outside my windows. I don't sleep very well.

Fessehaye takes me back to his house for lunch one day. His sitting room is small and neat and has a picture of his mother on the wall. His son, Thomas, offers me water with jug and bowl to wash my hands and his wife, Asema, serves us traditional shiro (chick pea soup) with injera (the local bread made with teff grain.) Injera didn’t agree with me in Ethiopia, so fingers crossed; it would have been churlish to refuse. They have satellite TV with 200 channels. About half of these seem to be evangelical Christian offerings.

Fessehaye also takes me on a night tour of Asmara. It’s kind of him, but I can’t see much, as there is partial power cut, most of the street lighting isn’t working and none of the buildings are illuminated. The piece de resistance is a patchy panorama from the top pf a hill.

Next, the gorges and mountains around Asmara.