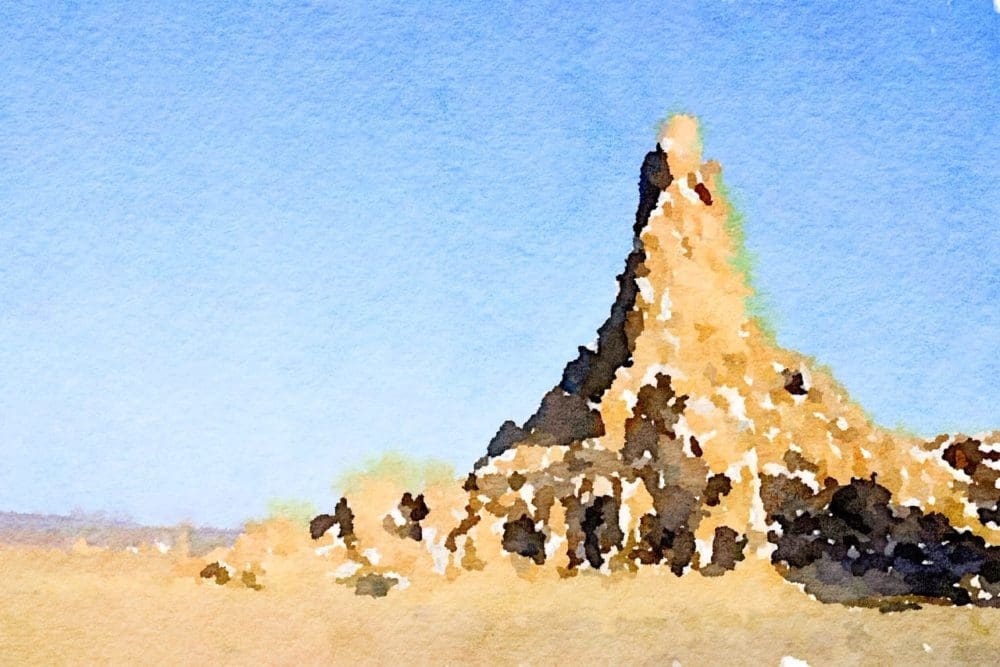 Touring Djibouti - Walking on the Moon - Horn of Africa Part 5

Across the Desert in Djibouti

The highway from Djibouti port to Ethiopia is an exercise in patience, with nose to tail tankers and container lorries wending their way up the many hills. The scenery doesn’t really compensate initially, as the desert is dirty basalt strewn rocks and thorns. Next, there’s a stretch of flat yellow sand ( the biggest desert in Djibouti says Akram) and more rocky escarpment, but now with my favourite flat-topped acacia trees and wildlife spotting. First, a troop of baboons - with bright scarlet hindquarters. Akram and driver Hassan experiment to see if they like chocolate biscuits - they certainly do - and the whole group are soon swarming all over the vehicle.

Next, a small flock of ostrich. Dainty Thompson’s gazelles are solitary under bushes and there are increasing numbers of loose (or hobbled) camels chewing at the scrub. Akram and Hassan struggle to understand my interest in camels. They say there will be plenty of those. Hassan is garbed for the desert, a big checked neck scarf wound round his neck. Akram however, is dressed in a red and black top, to match the land cruiser interior. He even has red and black sunglasses and headphones. He knows these are Sunderland colours (I didn’t), but doesn’t even mention Manchester United. Akram supports Arsenal. 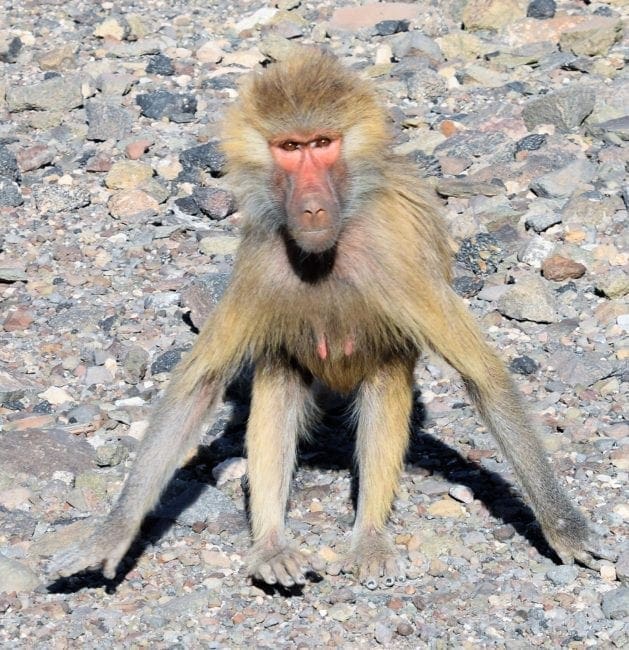 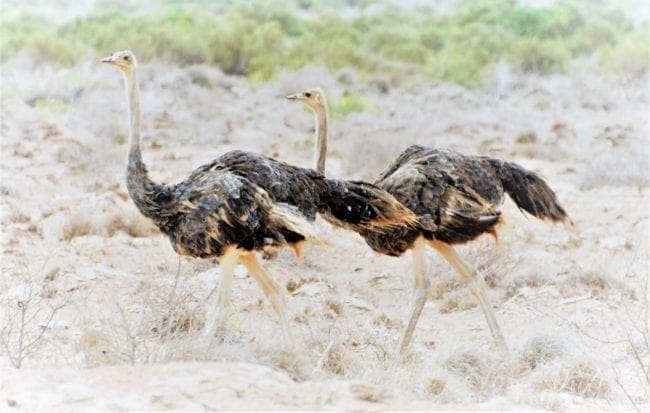 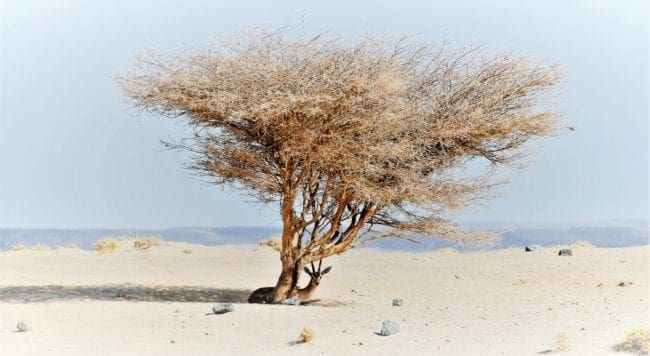 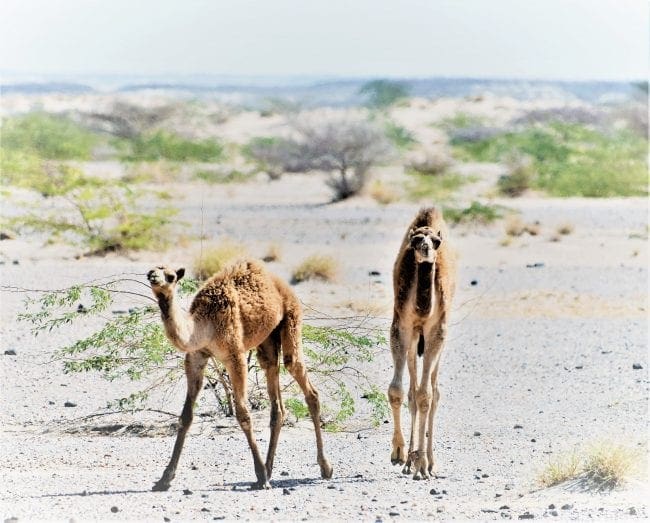 The country’s population is half Issa and half Afar nomad stock and these groups usually live separately, each tolerating the existence of the other. The president is Issa and the prime minister Afar. The palm tree dotted oasis town of Dikhil is called La Ville de Unité, as it’s the only place where these peoples cohabit. It’s the main junction on the Ethiopian highway and also the only suitable place for us to buy lunch. Besides, we have a puncture. While I’m feasting on chicken and chips and simultaneously warding off the local cat population, Hassan and Akram try to get the tyre repaired. But everyone is away from their workshops sleeping, praying or eating. It’s a long break. 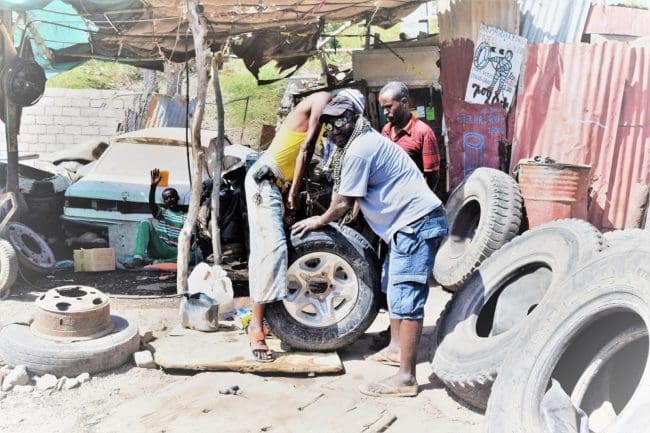 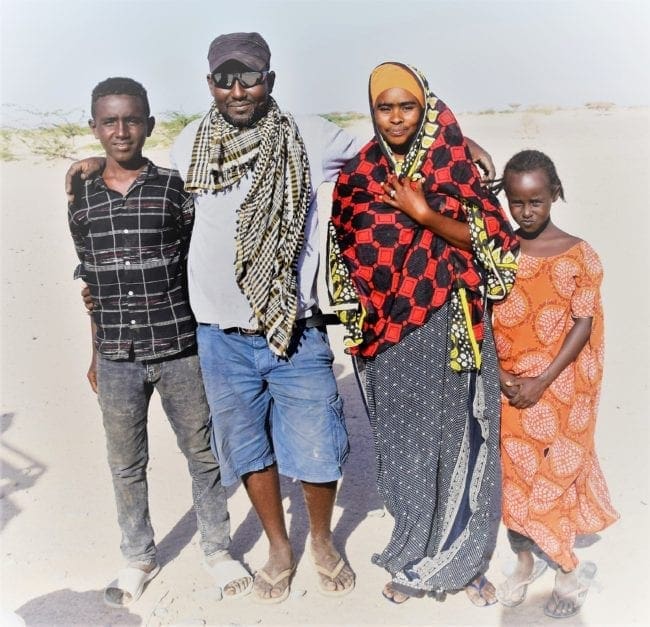 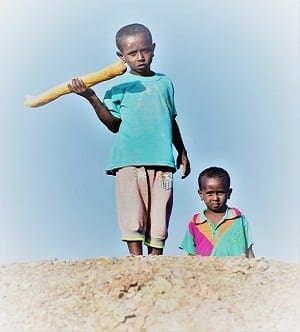 Now, seventy-five kilometres over more desert. There’s no road and Hassan for the most part drives where he pleases, though there are narrow rutty (very bumpy) parts. I’m impressed by how well he finds his way, but then he stops, and his family emerge from the scrub, to collect bags of flour. He lives here. Akram, in his turn, is distributing largesse, dropping off baguettes and water for any nomad children we meet. They grimace and reluctantly pose for photos in return. The villages comprise sacking tents, a few round huts and those little cubed clay houses we made models of at school, when we were studying the Holy Land. 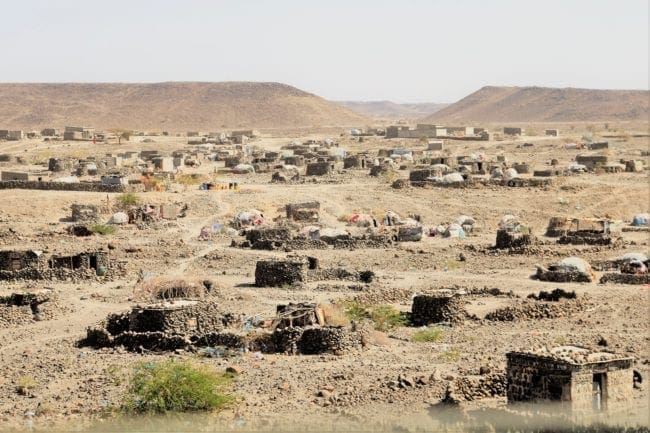 Lac Abbé - Planet of the Donkeys

We cross a small ridge and Lac Abbé comes into view. It’s amazing. Thousands of geothermal limestone chimneys, up to fifty metres high, belching sulphur into the sky. If you’re looking for a lunar landscape on earth, then eat your heart out Chile and Bolivia. They filmed Planet of the Apes here, but the set area has been commandeered by a herd of donkeys. ‘Planete des Anes, ‘grins Hassan.

Grazing warthogs are added to the list of fauna spotted, as we weave through the pillars, stopping for perfect sunset pictures; a golden disc drops behind the crags. 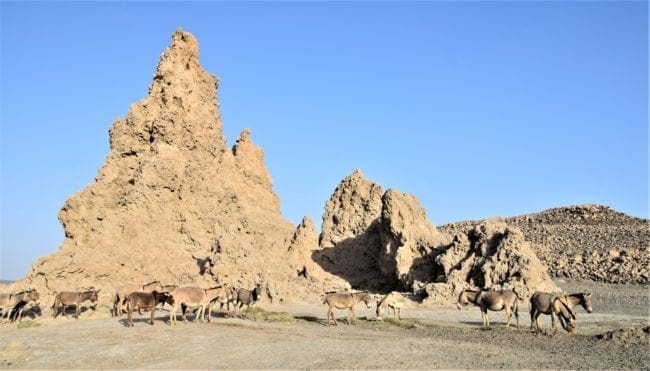 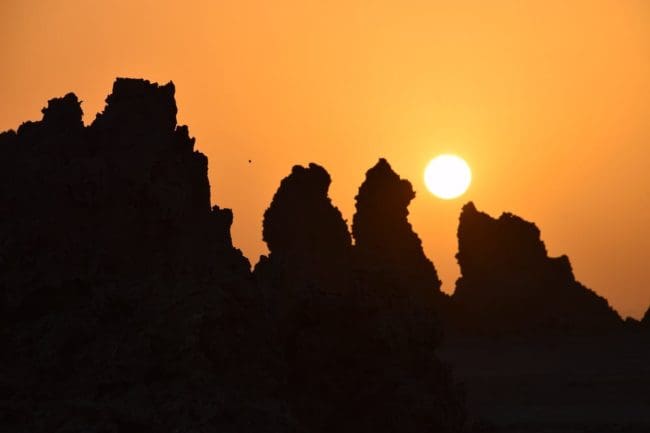 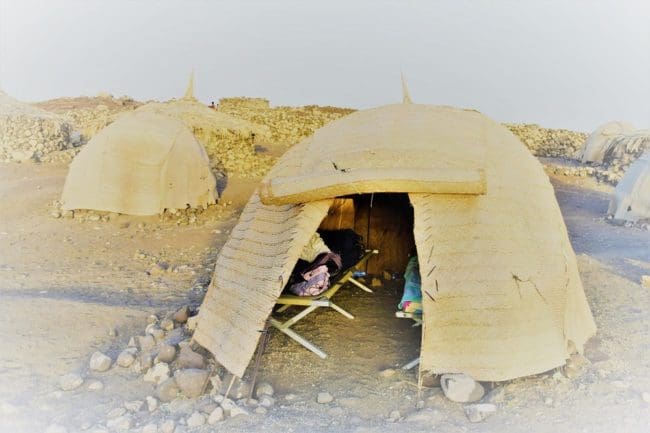 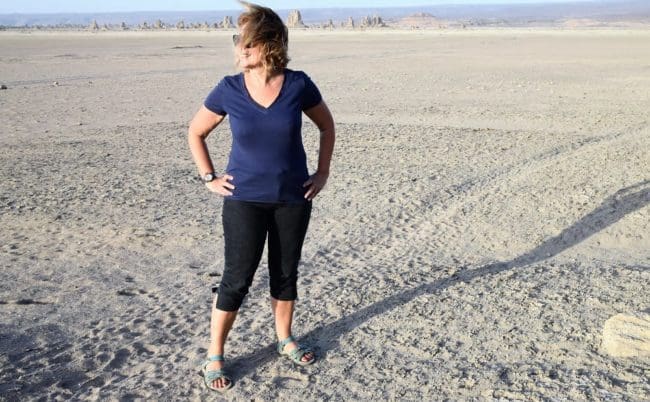 The camp is described as simple in the itinerary and I haven’t been looking forward to it. Even simple turns out to be a euphemism. It’s an igloo shaped tent, covered in grass matting, containing two camp beds and an elderly foam mattress. Bare earth beneath. There’s a clay toilet block in front, obscuring the view across the lake. At the moment the panorama  (the earlier one anyway) is worth the discomfort. Let’s see how I feel in the morning. On my instruction Akram has sneaked me an extra mattress and two more cotton blankets. It’s sweltering hot till the sun goes down and then the temperature plummets.

It definitely is a great view across the eerie landscape, once you peer round the toilet block.

In the morning Hassan and Akram enjoy demonstrating how to make the fumaroles spit and belch before we set off again. 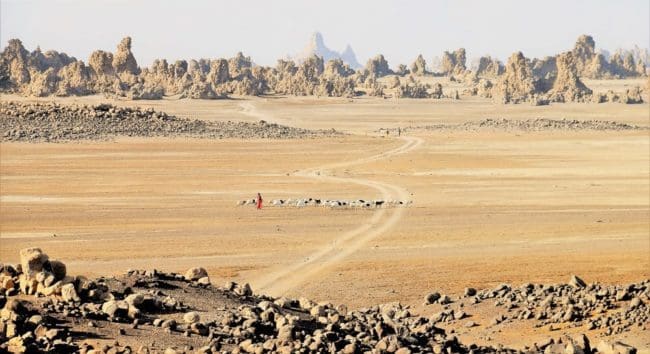 Back across the desert. I really wish I’d packed a sports bra. Hassan’s music collection varies between Ethiopian laments and African hip hop. I can’t say I’m keen on either, but I’m not being consulted. We drive off the highway for a picnic lunch perched on rocks looking out over  a golden stretch of desert. it's a very  peaceful break, until Akram announces that he's realised that this is actually a firing range and we should leave. We do.

North to Lake Assal (literally 'Honey Lake'); it’s the third saltiest lake in the world, the lowest point in Africa and the third lowest point on Earth, after the Lake of Galilee and the Dead Sea. It’s also very scenic, shades of turquoise and jade, has salt pans stretching around it and is surrounded by deep canyons and lava flow. The last big eruption was in 1978 and the volcanic cones poke out of the water, as well as towering above. The dark lava and the blue water contrast beautifully. 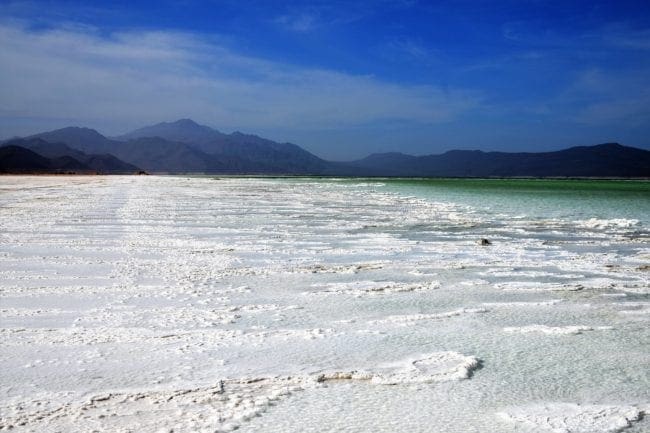 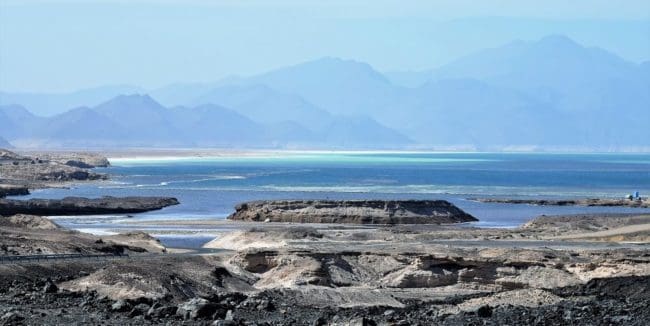 We teeter round the edge of the Gulf of Tadjoura and back to the town it’s named after. It boasts seven mosques, with seven cemeteries for the seven different local tribes and was once the capital of Djibouti, though the population is only 15,000. It’s now being rejuvenated, with a newly constructed port, ready to serve north Ethiopia.

I’m more interested in the beach to the north (more very rough tracks and relentless African dirge music), where there’s a surprisingly beautifully tended beach erroneously named White Sand. It’s actually beige, but gorgeous and peaceful, with an excellent reef (an assortment of huge vividly coloured fish and exceptionally clear water) that you can wade out to. It even has beach beds, circular thatched bungalows for rent and waiters to bring lunch on a tray. It’s a little paradise. But paradise in my experience always has a sting in the tail. This is a literal sting in the form of jellyfish. But only a small one.

I’m very reluctant to leave, but Akram is insistent. He wants to get home. As we bounce our way back to Djibouti, I persuade Hassan to play some Bob Marley. 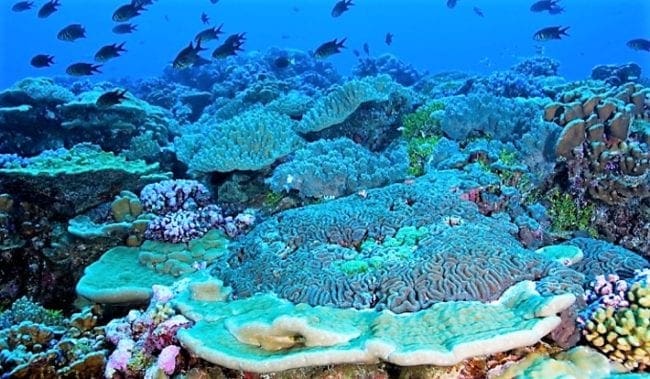 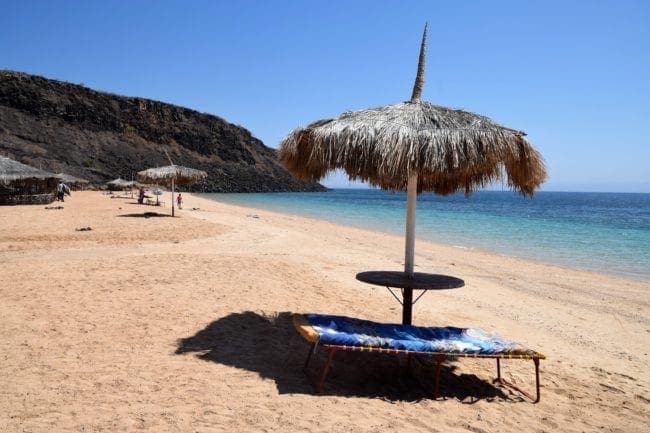 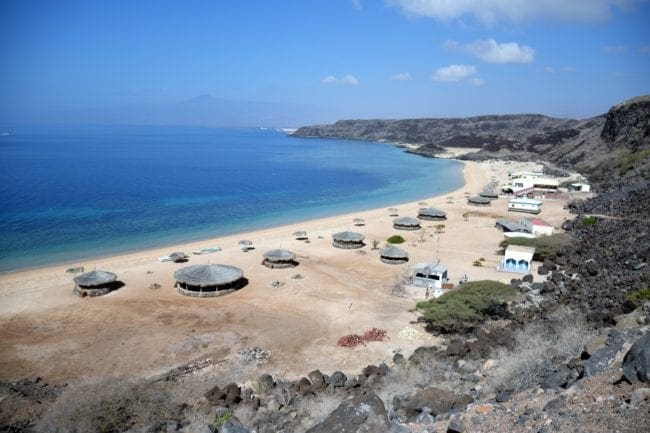 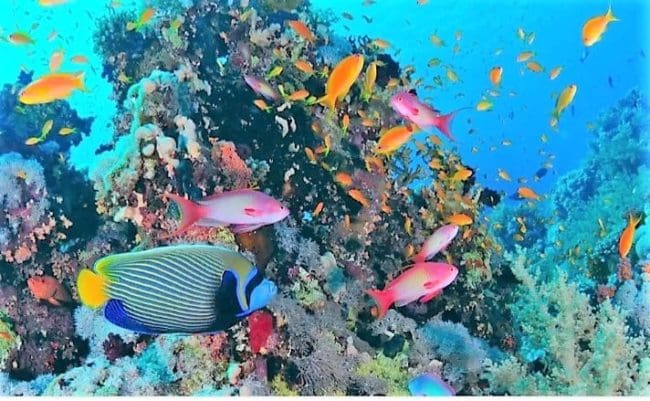