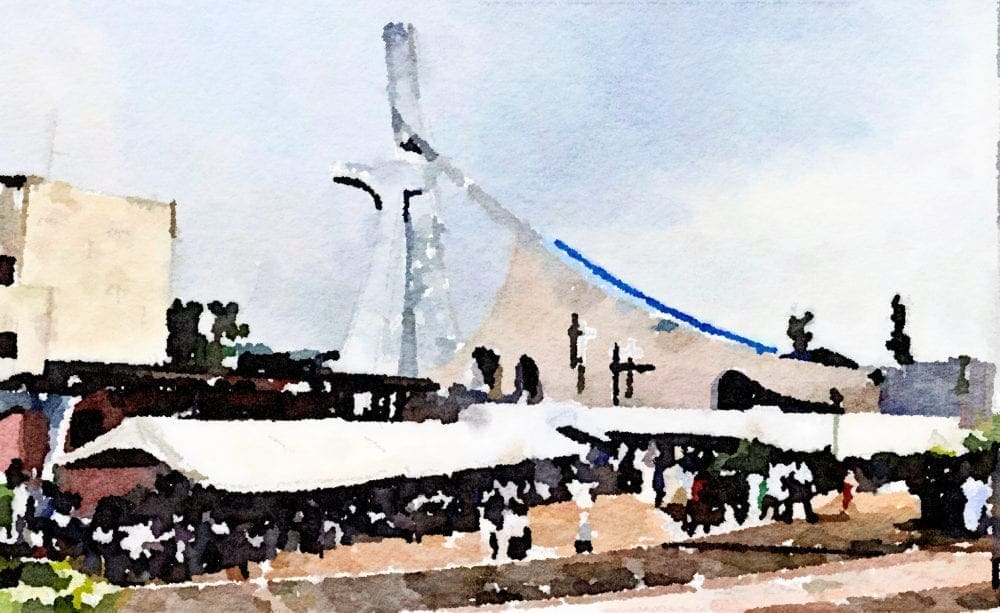 Yamoussoukro was a vanity project of President Félix Houphouët-Boigny, who was born here, in what was a village at the time. He extended the village with wide boulevards and designated it the new capital.

The road from Man is paved with enough potholes to turn it into an obstacle course and we slew all over the tarmac trying to avoid them. As is common in Africa, we pass a few broken down buses and overturned trucks. It’s custom to strew branches or leaves on the tarmac in warning if the vehicle doesn’t possess a red triangle. There are strings of isolated mountains shrouded in mist and more heaving markets. Now it’s Le Weekend shopping for New Year, which is a bigger event than Christmas, as it’s celebrated by both Moslem and Christian communities. It’s a long journey, with extensive stretches of one-way traffic where the road is being reconstructed. The ground still seems to be swaying when I do emerge at Yamoussoukro.

The must see is the enormous Basilica of Our Lady of Peace of Yamoussoukro, with its stained-glass windows and towering dome. I have a very entertaining tour with a cheerful and amusing guide. Depending on who you believe it’s possibly the largest church in the world, surpassing even St Peter’s Basilica, with an exterior area of 30,000 square metres. Finished in 1990, its design is said to have been inspired by its Vatican City sibling, with a hefty dose of Renaissance and Baroque style. It can hold about 18,000 worshippers, though is very rarely full. The cost has been kept secret. There was certainly plenty of marble and electronics involved.

The erstwhile president also provided a lacy icing sugar mosque and built himself a huge palace. The latter has a crocodile filled lagoon. They ungratefully ate their keeper four years ago.

Yamoussoukro is still an official capital of Cote D’Ivoire, even though all the political and economic business is carried out in Abidjan, the other capital. this is my next stop. The road from Yamoussoukro cuts through the rainforest swathed in the morning mist. Gnarled kapok trees with their pretty dots of flowers decorating giant arms tower above the rest of the vegetation. But we’re blasting through on a two-lane toll autoroute. It’s totally incongruous. Especially as Fufana has begun his Bob Marley CD at the beginning again. The songs are in alphabetical order; we’re up to Buffalo Soldier.

It’s a swift journey and we’re soon in the de facto capital Abidjan. Abidjan is the city with the third biggest French speaking population anywhere in the world. It is also the fourth most populous city in Africa, with about 4.7 million people living there. There’s a rainforest area, with a national park and monkeys, though they’ve moved the other wildlife away. Otherwise it’s a mix of grimy suburbs and skyscrapers in the business and central areas. It’s not exactly glitzy.

The Tourist Sights of Abidjan

The tourist sights are unusual. Gangs of men operate a laundry business in a tributary of the main river that bisects the city; my camera isn’t well received here. There are two more avant garde churches to visit. The sanctuary of our Mary has a helter-skelter like tower and St. Paul’s Cathedral is akin to the end of a suspension bridge. Neither can be visited inside, as there are all day end of the year services taking place and both are jam packed with participants. At the first a lengthy sermon is being relayed over the speakers and the congregation are picnicking or dozing on the lawns. The cathedral is hosting a musical event. It sounds more like a funfair and there is dancing and general jollity.

There’s also a large central fruit and vegetable market, the air rank with smoked fish and the stacks of live chickens in crates. It’s inhabited by colourful ladies who aren’t interested in tourists who don’t want to buy anything and who don’t like their pictures being taken. It has a mezzanine floor full of handicraft stalls where you can lean over the balcony and take pictures of the fruit and vegetable stalls without the ladies noticing. There’s also a separate souvenir market (same goods though) with a tourist cafe and some delightful restaurants by the side of the river.

Next stop Lomé in Togo.