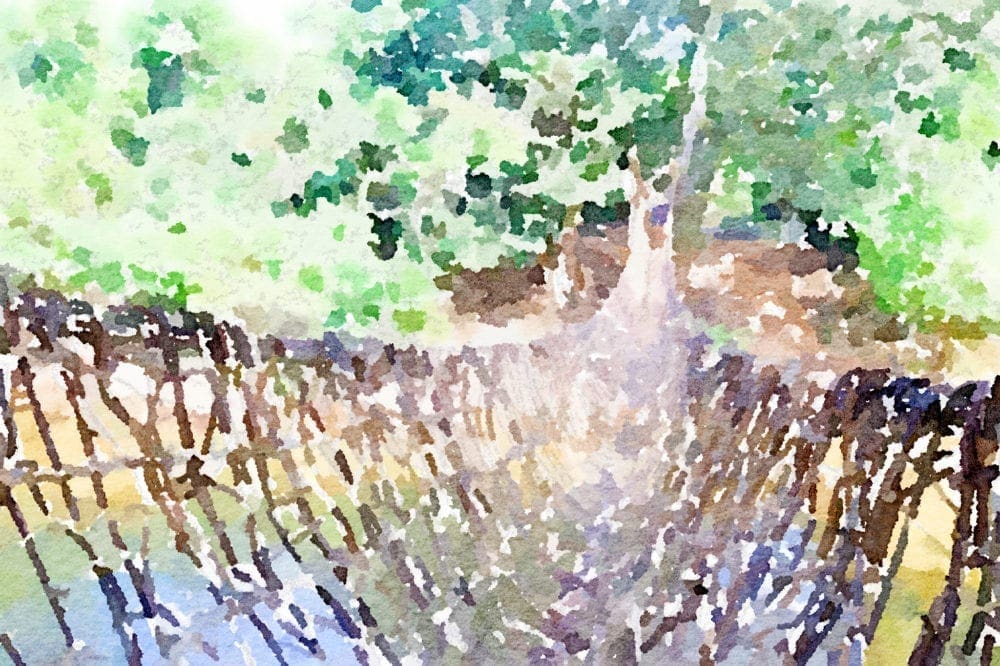 The Land of the Yacouba (Dan) Peoples

The villages of the Yacouba (Dan) peoples around Man are famous for their terrifying living liana bridges. There are about ten of them in Cote D’Ivoire. We’re off to see one of the bridges. I have a new car with that country’s number plates and a new driver too. The new driver’s name is Fofana and he’s playing Bob Marley. I shot the sheriff. His CD has 144 other Marley songs this time. You really couldn’t make it up.

The road is just as bad the other side as in Liberia, where I've come from, at least as far as the town of Danane, where we stop to buy lunch in the market. The streets are narrow, lined with stalls covered with black canvas parasols. These, like everything else, are covered in red dust. Baskets of baguettes remind me that I’m once again in a francophone country. There are even neat little boulangeries and patisseries; shoppers spill out onto the road. Buying seems to be the thing to do on Christmas Day. The locals are very friendly, dressed in their antlers and Santa hats.

The highway from Danane to Man, the eighth largest city in Cote D'Ivoire, is intermittently paved. The soil (and much of the highway) is still burnt orange and pretty mountains appear on the horizon, shrouded in mist. Man lies in the middle of a mountain range, which includes Mount Toura and Mount Tonkoui (the two highest in the country).

Rubber and cocoa plantations line the road. It’s harvest time for the latter and the beans are turning their familiar brown colour, scattered on matting. The air is heavy with the delicious sweet aroma of chocolate. This is the home of the Yacouba (Dan peoples). The rural dwellings are thatched mud brick huts. Tall stems of cassava sway round most of them, orchard like.

I’m lucky, as the bridge in the village I’m visiting has only recently been re-opened. It is swept away annually by flooding in the rainy season and is repaired miraculously one night each year. This endeavour is undertaken in a single night between midnight and four a.m.  by individuals considered to possess special powers. They are said to be mostly men whose average age is 50 years. According to local tradition, "Genies throw the vine bridge over the river", from one bank to the other.

This enables women to wobble across, with bowls balanced on their heads and a dog is cajoled into picking his way gingerly over the woven plants. The river rushes below and I’m happy to watch from my perch on top of the ladder that leads to the start. I’ve acquired an entourage of young followers who jostle to hold my hand as we stroll through the huts to and from the bridge, which is a vital link to other villages. Guide Francis does the wobbling honours for me.

The Tribal Dancing of the We Peoples

We bump further up into the mountains. This is the homeland of the We peoples, the historical enemies of the Dan, due to their close proximity. The name We, means 'men who easily forgive'. Here, we see a Ceremonial dancing performance which is highly gymnastic and involves small girls doing flic-flacs and being spun by their instructor alarmingly close to knives and concrete blocks. He also, even more alarmingly performs the head banger manoeuvre, swooping a child up and down around him whilst grasping her feet; fortunately, the girls are very well trained and don’t flinch and no-one is injured. The impact is enhanced to spectacular by shell headgear (for the men), white face paint and cowrie and fur masks (for the girls). The calabash musicians provide the background to a pleasurable hour.

Back through the dusty markets of Man. On the other side of Man is a sacred forest inhabited by monkeys. Local legend says that a chief sacrificed his daughter Manlie, at the behest of a wiseman, in return for prosperity for the town. The town name was later shortened to Man. The macaques are enticed down with bananas and are shy enough to appear cute.

Man is presided over by a rocky outcrop known as Le Dent de Man (Tooth of Man), popular with hikers and most recently, rock climbers. Its other claim to fame is a pretty (ish) waterfall, trickling over a granite cliff face, where we take a quick wander, along with other day trippers.

Finally, another village on the edge of town where there is more fascinating and exuberant stave and mask dancing, with the theme of retribution – I actually join in for a while, after some coercion.

The driver is up to track number 135 on his Bob Marley stick. I’m hoping for something different when he gets to the end, but no, he just starts again at the beginning

Next we drive to the capital, (in name), Yamoussoukro.