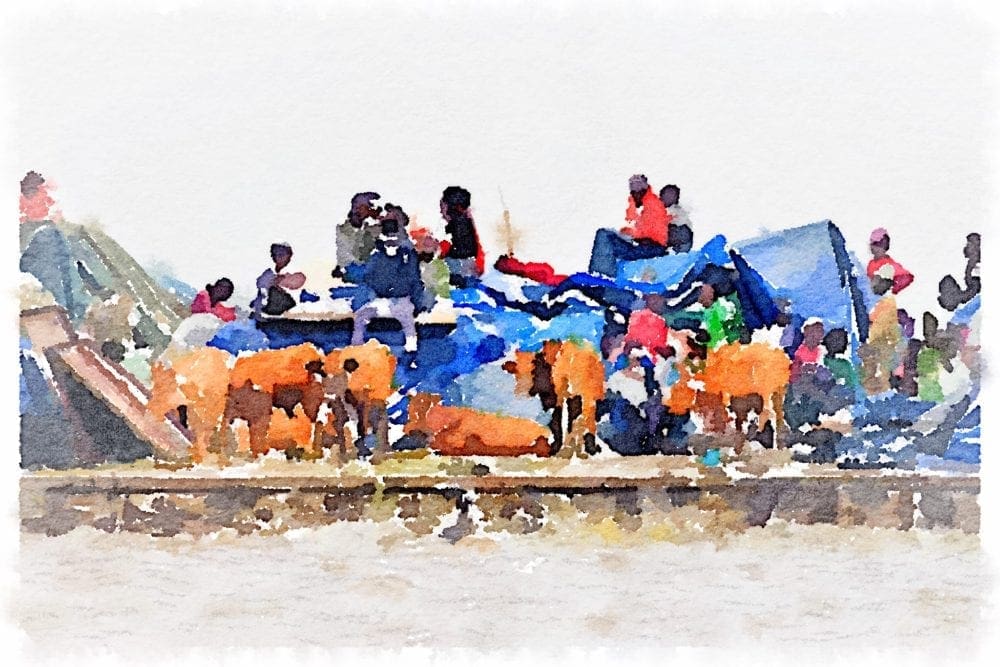 Kinshasa, which used to be known as Leopoldville in Belgian times, is the third largest city in Africa, after Lagos and Cairo, but is perhaps best known for hosting The Rumble in the Jungle, in 1974. As far as I can see, through the muggy haze, jungle doesn’t really come into it. Kinshasa is a very dirty, drab grey spread of low rise concrete. The smaller streets are ankle deep in litter.

My tour itinerary says it’s brash and possibly intimidating. It’s certainly not brash. There are a couple of four lane highways in the centre lined with cleaner more modern buildings, banks, embassies and shops, but there’s nothing of note to report. Intimidating? Well, the dusty roads are jammed with lemon yellow taxis and minibuses - following a recent New York style government directive  - and the driving is atrocious, vying with Bangladesh. Buses lurch past with passengers hanging off the sides and back. There are more people, as well as some goats, standing on the roof of one.

Instead of the usual garland driver Adolphe has greeted me with a plastic yellow, green and black necklace and bracelet. These, it transpires, are the colours of one of the local football teams, V-Club. As we speed along they serve to attract attention from other vehicles and we are hemmed in by a cacophony of smiling, jeering and waving.

My Kinshasa Hotel and the Peacock

My Kinshasa hotel is surrounded by barbed wire and not very prepossessing. There’s a garden and a pool to compensate for the dilapidated exterior and the dreary cream rooms. Trip Advisor tells me that 'the lovely gardens are frequented by exotic fowl, including a peacock'. The peacock makes his entrance at breakfast, demanding tit bits, while more timid small yellow birds swoop in for crumbs and larger brown and black cousins squat on the side tables and scurry through the chairs. (I’m fairly sure these are chickens.) There are also chattering African grey parrots and lovebirds (sadly) in cages and a lonesome guinea fowl.

Adolphe, guide Yahve and Ihead out of town, (it takes some time) past endless roadside stalls and local markets to the bonobo sanctuary. These apes have the closest genetic link to humans of any animal and are eerily reminiscent of the degenerate ape-men in Wayward Pines. They beat their chests, pelt us with grass and leaves and contemplate us wearily before heading off to try every page in the Kama Sutra. One young male has a plastic bottle he’s using as a skateboard.

Bonobos are about the size of chimps, but are slimmer, stand on their back legs more and have middle partings (very in vogue). They can be found only in Congo and are highly endangered, due to pollution, deforestation, and bush-meat trade. Audrey Schulman writes about them engagingly and authoritatively in her novel, The Theory Of Bastards. The animals here have all been rescued and the guide says they have become too domesticated to be returned to the wild.

Yahve has just informed me that there is plenty of big game in the Congo, including tigers. Clearly he’s not above misinformation himself. He takes me for lunch in a local restaurant. Chicken, rice and fufu (manioc balls) costs five dollars for all three of us. Then we’re off to the art market. That’s quickly disposed of – a multitude of masks and far too much hustling. Next, the National Museum. It’s perched on a headland above the Congo River, with views across the giant basin to Brazzaville. Just below is the harbour where Henry Morten Stanley landed when he came to help King Leopold II seize the country. They’ve left his statue outside the museum, even though he’s generally reviled. I’m given a very thorough tour by the curator who speaks French extremely slowly, for my benefit. I manage to grasp about a third of what he says.

Our last stop for the day is the rapids at nearby Kinsuka. There are gardens where we sit and watch the waters gathering, seemingly piling in tall peaks, before toppling in a crescendo of foam. Trucks wobble over the sand transporting sightseers precariously round rocky inlets to the water’s edge. Also on offer are longboat ferries. Yahve drinks beer and negotiates over a fish, just caught by a young boy. He’s going to take it home as a present for his parents.

Along the Congo River or What a Difference a Driver Makes

I've been down river to Boma and am back, safely, just. Today, I’m being driven by Desiré, a high powered military officer (I’m not quite sure how this works – he’s a friend of the tour company owner). Not only are the police letting us through with no hassle, they’re saluting. And the car is a Rav 4 with a functioning engine. We spend most of the day on a long brown boat on the brown river. We bob along some reed lined channels to the expanse of the Malebo Pool. It’s 22 miles long and 14 miles wide, so I can’t quite see the Republic of Congo on the opposite bank.

Most of the boats we pass are either wooden canoes or ferry boats. The latter are packed with goods, people and animals. A huge palace teeters on the bank to the right. This belongs to the current president. Mr Kabila, whose second and final term in office ended two years ago. Needless to say I’m not allowed to take a photo.

We visit a dirty brown village (the chief pockets ten dollars for the privilege) and we eat a very brown lunch, cooked by Eveline, the owner’s wife. The beans, rice, chicken and fish are very tasty though and it’s by far the most relaxing day so far.

Next, over the river and north to the Republic of the Congo.