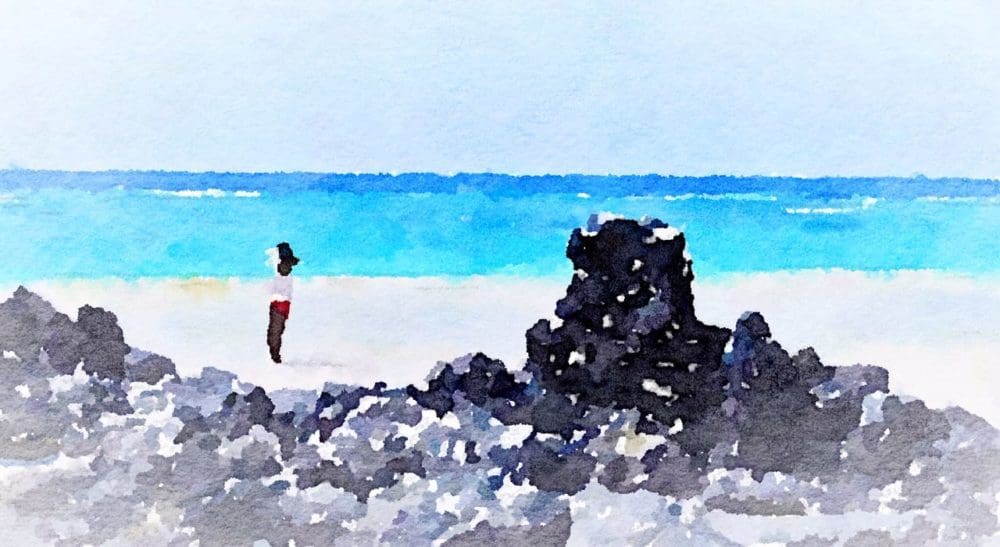 I've been told my guide to visit Comoros is called Mohammed. I meet one Mohammed fleetingly and accidentally, but it seems he’s leading an English speaking group today. This is an absolute deluge of tourists for the Comoros. Omar, who met me at the airport, as I fly in from Mayotte, informs  me that he (Omar) is to drive me (although he also tells me he’s actually the chief guide), as a tall young man in check shirt, baseball cap and jeans bowls up. Omar says that this is my Mohammed and he will be my guide. His English isn’t great, but he has enough for a very basic conversation.

The traffic is terrible and Omar is exceedingly cautious with his driving . At one point we actually reach 30 kph. To be fair, discretion is definitely the better part of valour here. There are wrecked vehicles round every bend. However, he also gets lost once and there are several near misses on left hand turn manoeuvres. 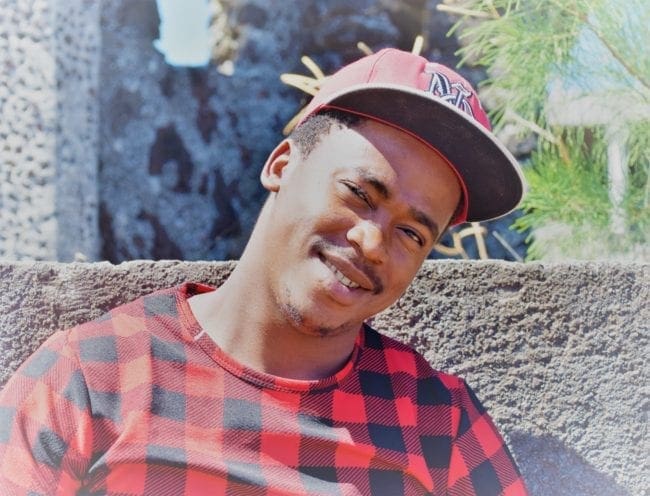 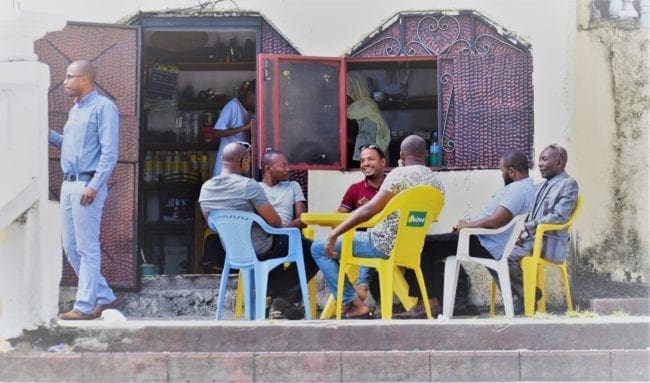 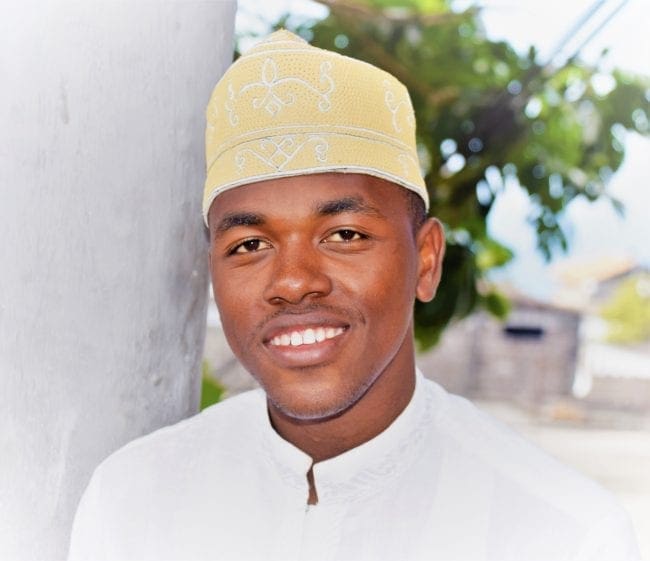 Moroni, the Capital of the Comoros Islands

The main island of Grand Comore is similar (unsurprisingly) to Mayotte. It’s more obviously volcanic, considerably poorer, and absolutely filthy. The beaches and river beds are almost obscured by litter. Moroni is a cluster of corrugated metal dwellings, generally unpainted, several sections of land fenced off and signed to say they are to be developed, a large number of unfinished concrete buildings (including several mosques), a few Arab style edifices around the medina and central square and some modern official constructions, such as the presidents' palaces and the parliament houses (mainly provided by the Chinese). 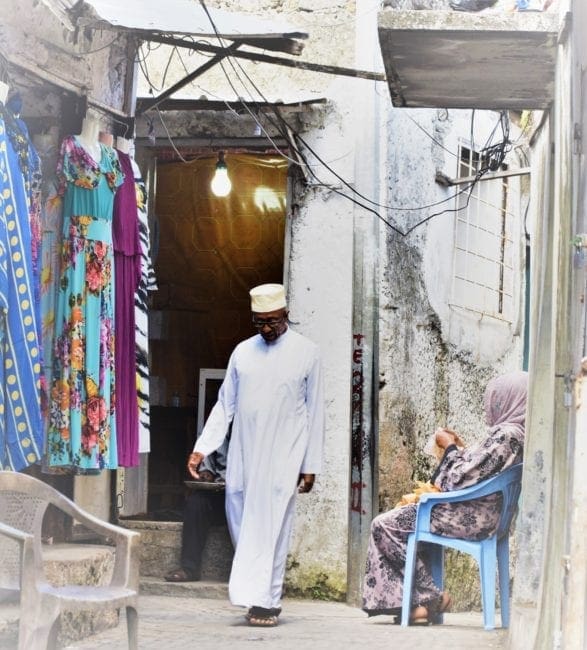 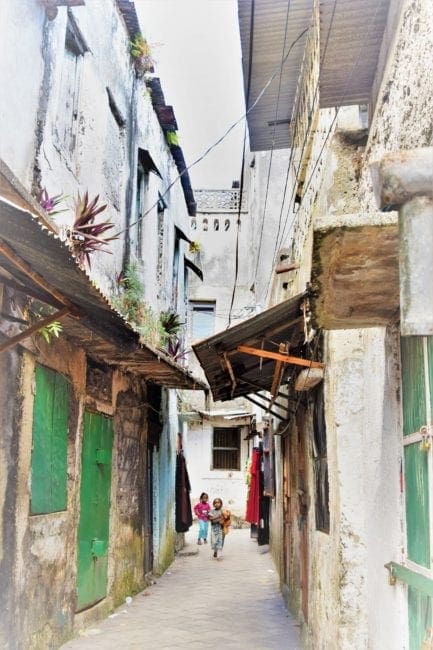 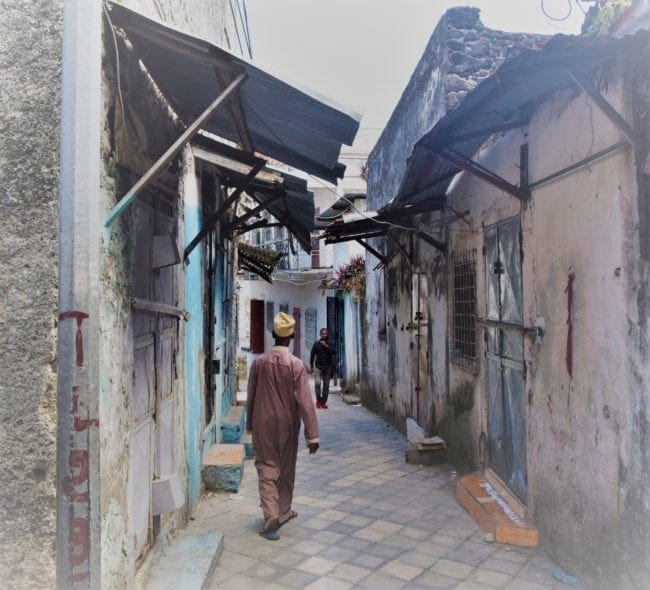 We visit the museum, where I tell My Mohammed what the signs say and the highlight is a stuffed coelacanth. I’ve never seen one before. The lower floor is mainly devoted to the Grand Mariage. This multi-ceremony event lasts more than a week. Families save for it for years and can spend their life savings on providing meals and other celebrations for the entire village. Omar says it is expected of every member of society at least once in their life. He also tell me that he isn’t ready for it yet. He has six children. My Mohammed chirps that he has no intention of getting married anyway. He’s a twenty-one year old DJ, part time, and very happy with his way of life. 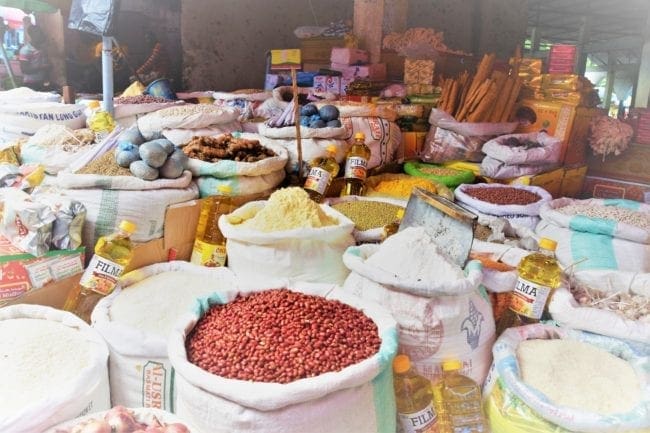 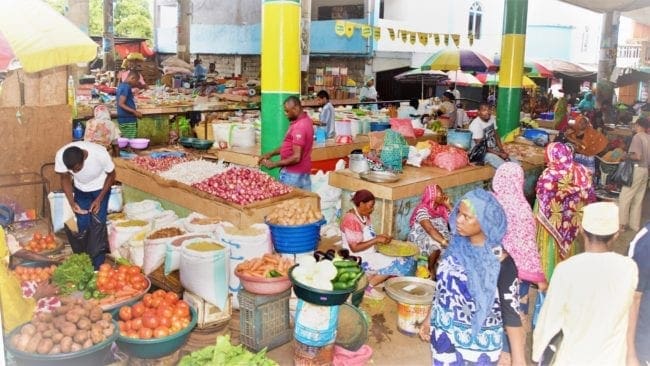 We then saunter through the old market and medina. The clothes here are also similar in design to those in Mayotte –again it’s an almost entirely Moslem population- but here the women are less stylish and the men more likely to wear Arab garb, with embroidered skull caps. Most people are very friendly. They all have a greeting and a smile, unless you take out your camera.

No Photos on Comoros - Thank You

The women are even more hostile to photography. I’m not even allowed to point the camera at their produce. My Mohammed explains (via Omar and much giggling) that they shouted at him to say if he wants me to have a souvenir photograph from the Comoros he should take down his jeans. Some of the men are more amenable and a few volunteer to pose, especially in the huge central market, which is hustle and bustle and amazingly colourful. The medina is quietly charming, in a dilapidated crumbling fashion. The ancient Friday mosque is a distinctive and unique landmark, curving in front of the port. Now, the sights of Moroni are exhausted. 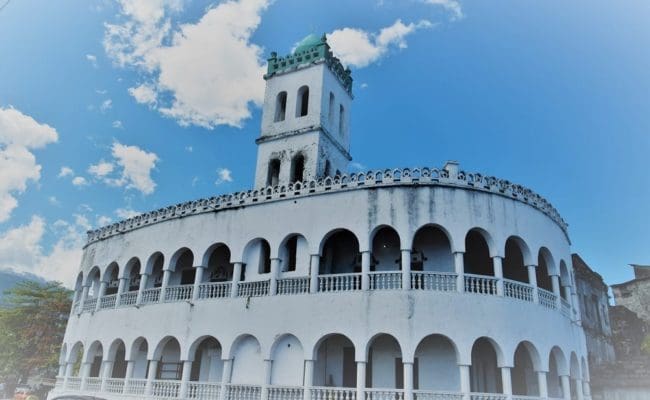 We proceed extremely slowly south to the cliff where 350 women committed suicide, rather than submit to pirates and slavery. Beyond is a (very) ruined sultan’s palace, basalt beaches, ylang-ylang plantations (another still) and the Marabou Lake, where you can make sacrifices to get rid of your evil spirits. Finally, up to the top of the ridge for the view of the lava flow from Mount Karthali, the largest active volcano in the world, at Singani. 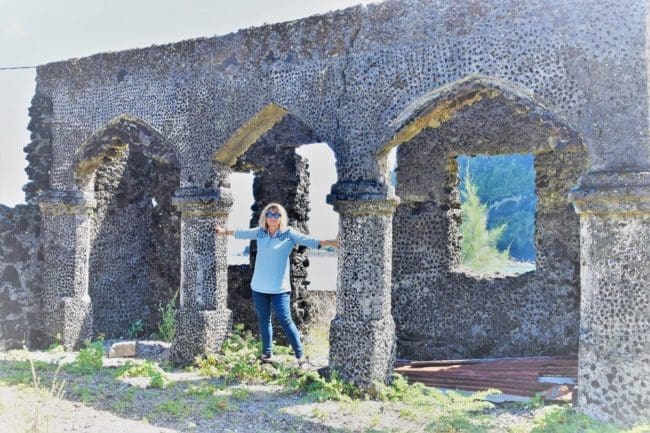 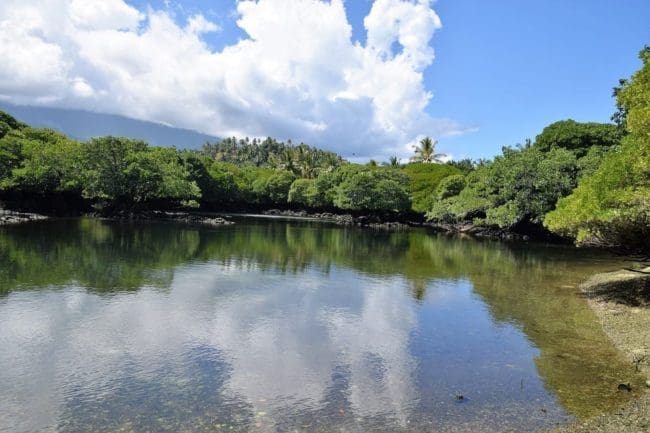 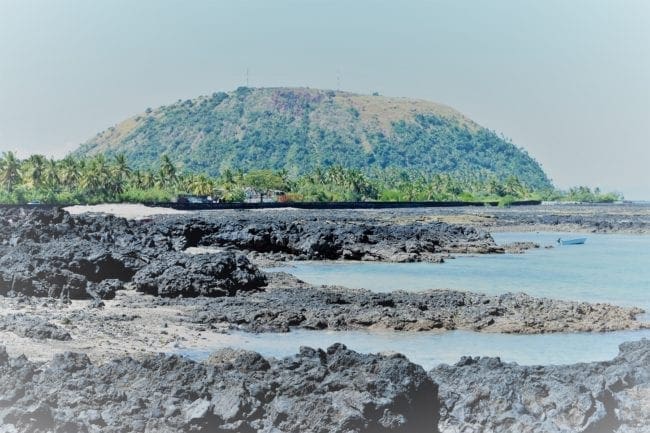 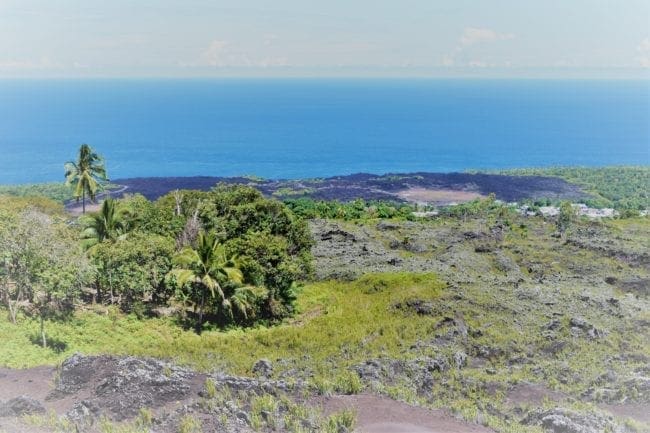 My camera isn’t getting much exercise in Comoros, what with the women refusing portraits, the litter spoiling the scenery and the FCO advising visitors not to photograph official buildings anyway, because of anti-French sentiment. It seems that the president has just recently imprisoned the whole of the opposition party, who were objecting to his recent referendum which purported to confirm that he should remain in power beyond his current term. Riots and dissent are highly possible. Omar says not to worry, he’s sure he can influence anyone who objects to my photography. Nevertheless, I’m not keen on risking being carted off to jail.

Back at the hotel I’m asked out for a drink by the other Mohammed's tourist group of six, who have crossed our path during the day. Yes, a proper drink, in a bar up the road, where they kindly send out for tonic. There are four ladies (all imbibing), two Americans, one Australian, one Kuwaiti. Two of them are called Julie, so I have a 50% chance of getting the name right. They complain that their Mohammed has talked only about himself (showing them 25 pictures of his wife) and politics (how much he hates the French). It seems that Omar was the better option – I may have to resist attempts to poach him. 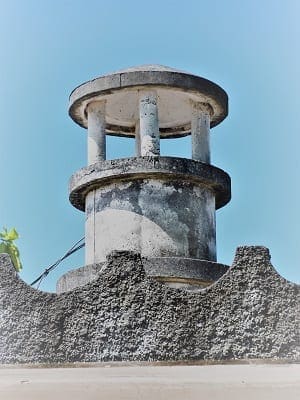 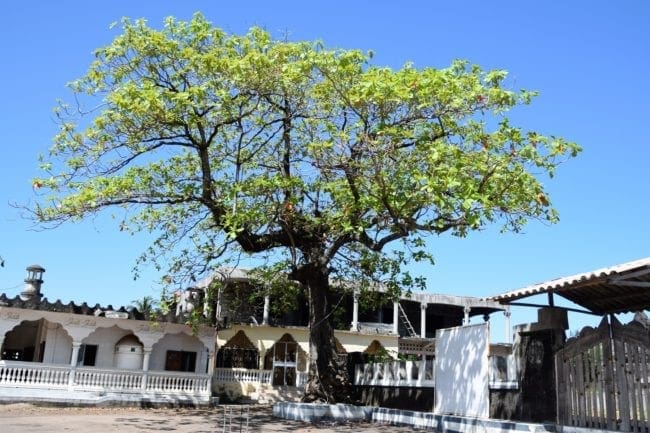 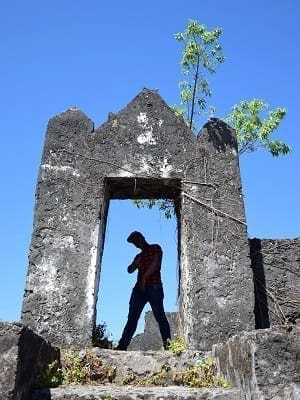 Today, we’re almost in convoy with the other Mohammed group, exploring the island. Omar is absent and has brought in another driver for me, as his wife’s father has died. I’m not sure how the arrangements were made, but My Mohammed seems to be summoning him from the midst of the hotel hedges. Hassan doesn’t speak a word of English, or French either it seems. Mohammed and I muddle through in Franglais. My French is as good as his English, which isn’t saying much. But I’m now convinced I have much the better deal guide wise. Mohammed tries exceptionally hard to make sure I see everything I’m supposed to in the Comoros. He has learned the programme off by heart. It’s a little disconcerting when he tries to stroke my face a couple of times, but I assume he’s only helpfully moving the hair out of my eyes. 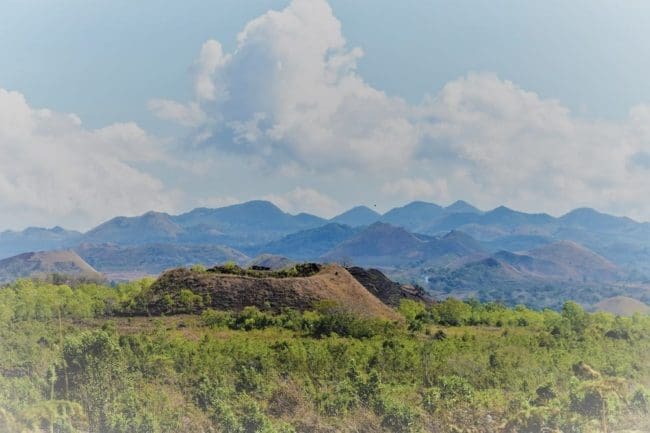 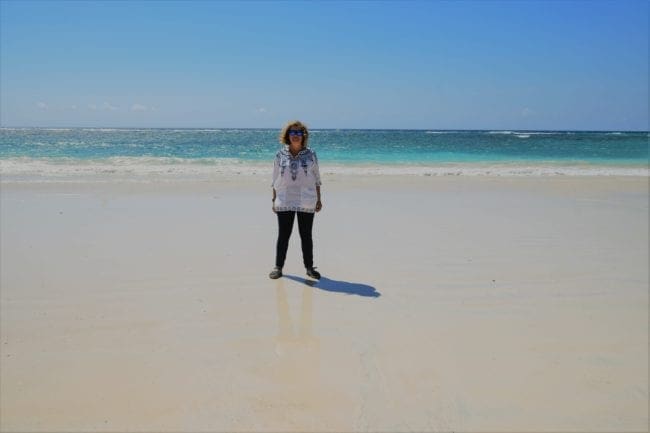 The scenery today is sublime. We’re on the other side of Karthali, with views down to the coast, more lava flows and an ever extending vista of palm trees. There’s the High Plateau of Diboini, with seven volcanic cones and a whole string of stunning beaches. Surprisingly, they are white coral sand, admirably framed by the dark basalt. And thankfully, on the whole, the beaches of Comoros are clean, though the same can’t be said for the backdrops. One delightful cove, Chomoni, is signposted – Une Plage Propre. There’s more ylang-ylang, and a few mongoose lemurs. 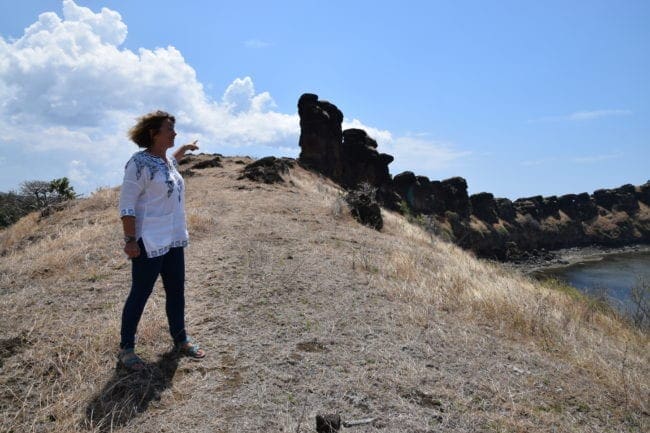 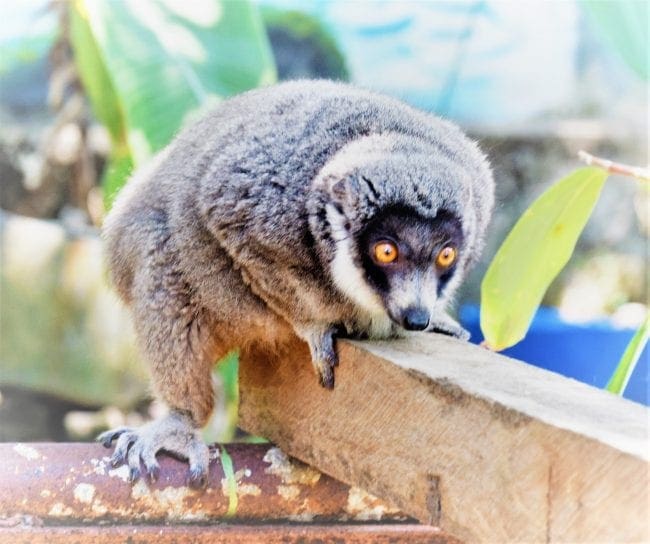 Possibly the highlight is the Dragon Rocks, which really do look like the backbone of a dragon, head rearing. They are perched on the crest of a cliff, looking out to the volcanoes, across the lagoon and over to minuscule Turtle Island. There are fishermen working with nets and buckets. My Mohammed helps me scramble to the top and shows me the best view points. The other Mohammed has stayed in his minibus on the road and seems disinclined to do anything. His group eventually mutiny, having seen me up top and ascend too. Their Mohammed follows lethargically. Australian Julie’s voice wafts across on the breeze. ‘He’s not a guide. He’s an idiot.’ 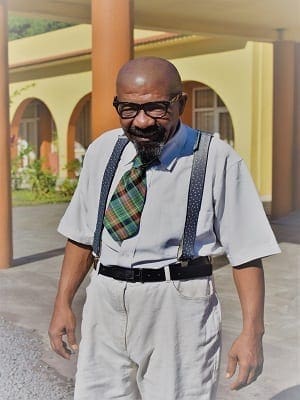 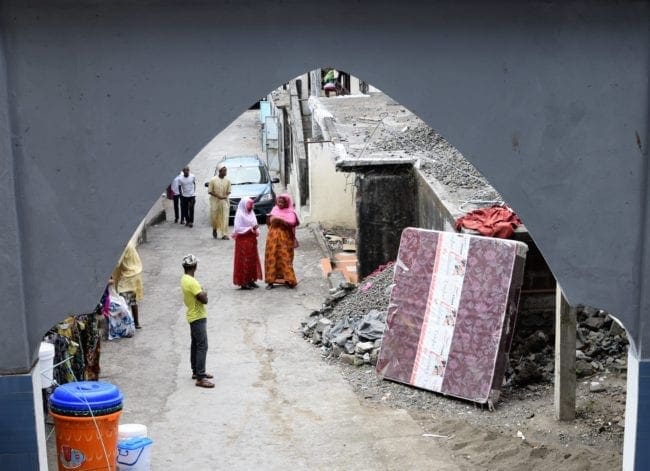 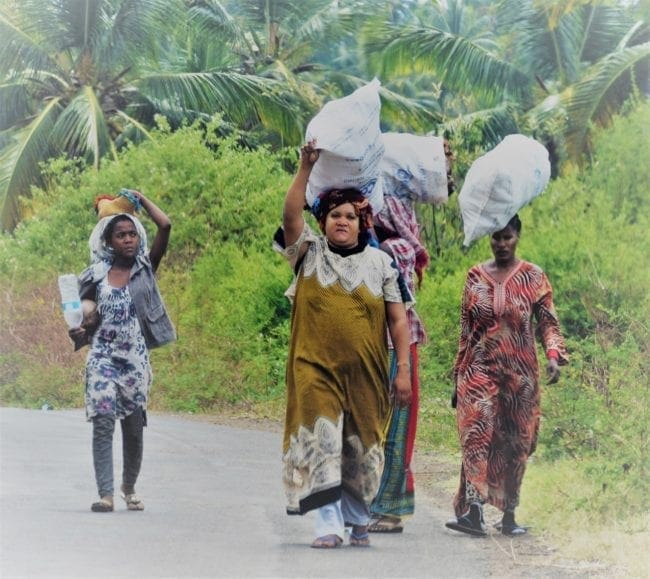 Their group does have very nattily dressed driver, Francois, braces, cropped trousers, little kipper tie, fancy boots and a small goatee. He’s  also enraged, because no-one has provided lunch for him. Mohammed II has mopped up his group’s leftovers. (I’m sitting eating with my two men). It’s all quite exciting.

The last stops are a thousand year old hollow baobab tree (very similar to the one in Boma, I definitely have come full circle) and a beautiful. supposedly bottomless aquamarine salt lake in what looks like another caldera. Mohammed tells me it was created by the marabou, who submerged a village in there, as no-one would give him a drink. As Kuwaiti Ayesha observes, ‘That’s quite a harsh punishment’. 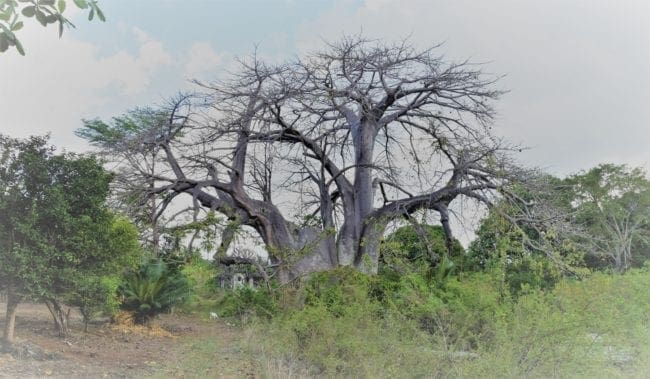 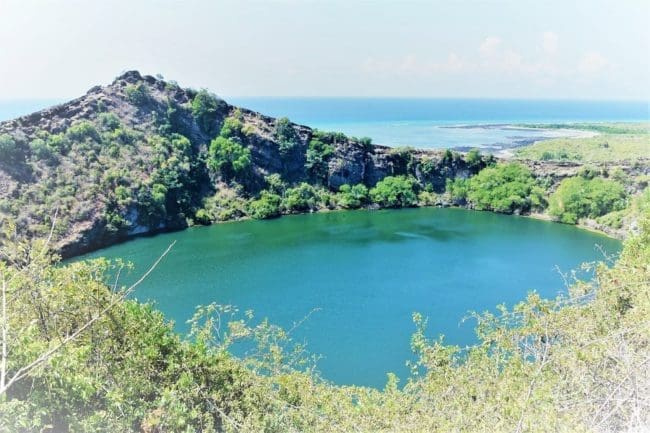 Up early to wave my new friends off. They’re heading for the other islands. I’m very sad to see them go. They have been welcome and fun company for the end of my journey. There haven’t been many other tourists on the way and hardly any that speak English. Omar is taking me to my beach hotel today. My phone is showing three calls from Mohammed. He says he misses me a lot. ‘Oh dear!

Itsandra Beach -The Prettiest Beach in the Comoros?

My last two days are to be spent in what is described as the best hotel on the island, on one of the prettiest beaches, just south of Moroni. Except that the fates have conspired against me. After all the weeks of dry weather it’s now bucketing down. (Incidentally, the overly optimistic weather forecast summary says ‘Mainly sunny’.) The streets of Moroni have become a river. The hotel is called the Golden Tulip Hotel and Spa. So I decide to have a massage to compensate for lack of beach time. The receptionist looks bemused. There’s no spa. And my stomach is twitching. An upset is probably overdue; I have been in Africa nearly six weeks. 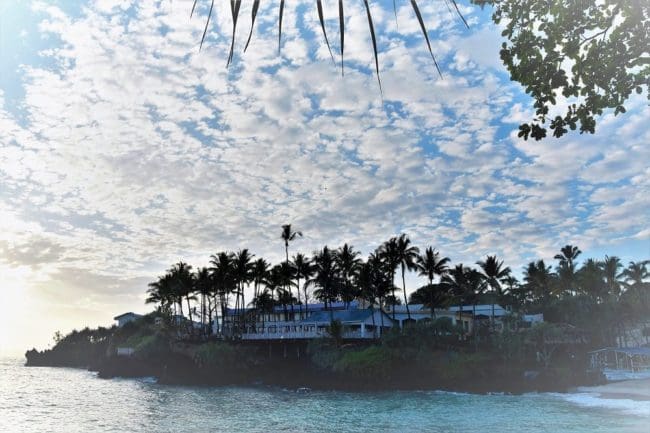 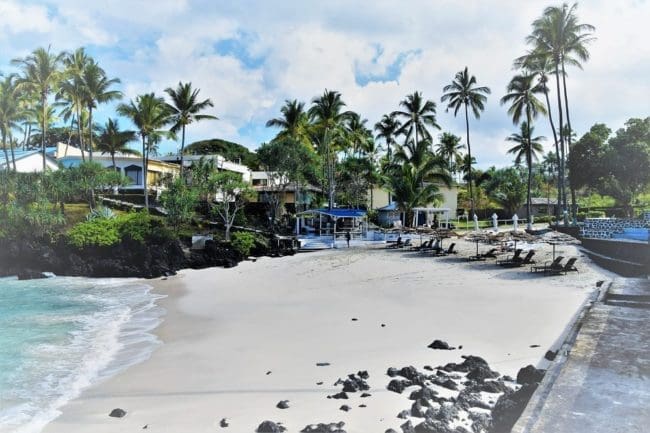 Reasonable weather – some cloud, a little rain. Good enough to spend most of the day on the beach. The hotel makes a decent but incredibly strong caipirinha. The effects sneak up on you slowly. So the room is spinning when I make it back – I only had two with my farewell leaving dinner lobster. There’s ice in my drink, so I ask them what water it’s made from. ‘The machine’ the girl says. No wonder my stomach is dodgy.

Naturally, the sun is shining more consistently on my last day, but I manage a morning on the lovely little beach. It’s lively today, the fishermen are dragging in their outrigger canoes. Then I’m heading for the tiny airport and home,