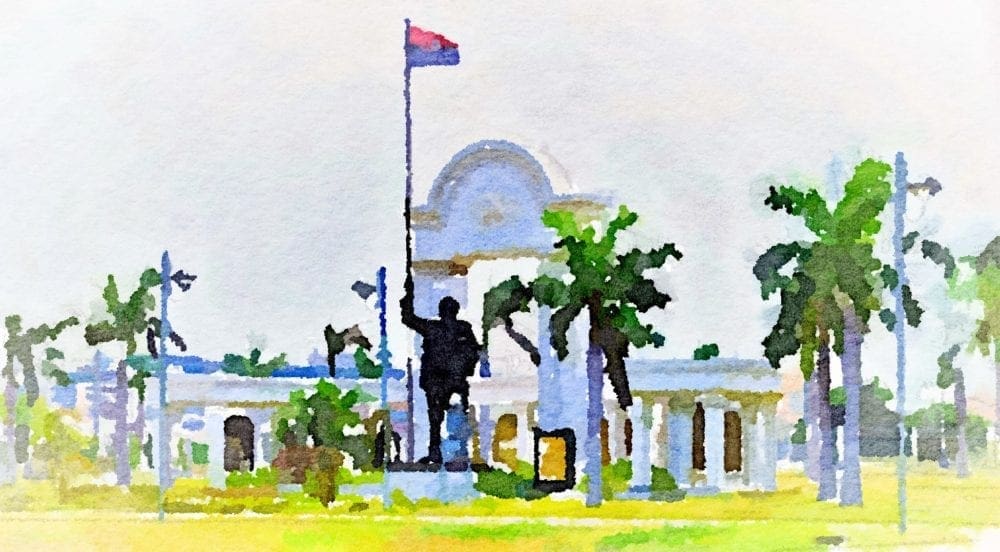 The Zombie Tour of Luanda

I'm exhausted from my flight, but it’s difficult to be grumpy when all the Angolans are so delightfully friendly. Even the men in Luanda Airport immigration. Then I’m met by Paulo and Climaldi who are beyond delightful, so I’m doing my best to look thrilled when they tell me I’m going on my city tour straightaway, as my evening flight to Lubango, in the south, has been moved to mid-afternoon.

Fortunately, there are few major sites, though Luanda is an oil boom town, a city under construction – after the long lasting civil war (1975-2005) the city seems to be permanently expanding. The centre is divided into three distinct sections – Baixa de Luanda (lower Luanda) from the port to the fortress, Cidade Alta, the upper part of the city, home to the presidential palace, and Ilha do Cabo, a peninsula surrounding the bay with beaches, nightclubs and restaurants. Behind and above the historic centre, central bairros include Maianga and Alvalade (residential) and Miramar (embassies), as well as Kinaxixe and Maculusso, which are characterised by Portuguese apartment blocks. Further outside the centre, the neighbourhoods become more informal, dotted with 1970s Cuban apartment blocks and new developments.

Luanda was recently voted the most expensive city in Africa for expatriates. There are glass scrapers and chic restaurants sandwiched between oil tanks and shanty towns. The government are busy demolishing the latter and replacing them with two-lane highways and shopping malls. I’m unable to establish whether the dispossessed people are being rewarded with superior living quarters. I read that some are being moved 20 kilometres away. Unsurprisingly, they’re not very happy about it.

I’m not sure whether to be sorry or not when it turns out that a considerable chunk of what I have  been scheduled to visit is closed on Mondays. Climaldi, who has been allocated guiding duties, says ‘he had not been informed’. Nevertheless, he turns out to have a silver tongue. He talks us into the park surrounding first President Neto’s towering and strangely splintered phallic monument and I’m given special permission to take pictures.

The Forteleze de Sao Miguel is a 16th century building dating from the earliest period of colonial rule. it was a self contained city for the military garrison, as well as a holding point for slaves. Some of the exhibition halls here are shut. But the famous blue tiled interiors (azuleros like those in Porto) are still accessible, and there is plenty enough artillery from the civil war decorating the walls and terraced fortifications outside, if I had the inclination to gawp at guns; the outlook across the city, Bay of Luanda and the harbour are splendid.

There’s also the huge neo-renaissance National Assembly and the ornate yellow Iron Palace (built by Gustave Eiffel and used as the French Embassy). According to Climaldi the palace is never open anyway. There’s even a sprinkling of art deco around here.

Next, an open air market where most of the goods piled high on wooden trestles are hidden under an assortment of cloths. Those stall holders who are open for business seem to be slumbering peacefully next to their wares.

Last up, Miramar, a tour of all the embassies, a row of opulent villas, cheek by jowl with a couple of spare presidential palaces; they all have a great miramar (sea view) across the up and coming Ilha do Cabo - more shanties earmarked for destruction. They’re to be replaced with smart hotels and beach bars.

And that’s my zombie tour. I’ve survived on caffeine from Coca Cola. And I’ve also escaped unscathed from the car. I’m not sure if Climaldi is unfamiliar with the vehicle, but so far, he’s scraped both the front and rear bumpers on kerbs and nearly taken out a motor cyclist and two pick-ups. He seems oblivious to the sound of horns pursuing us down the road. And, talking about survival, I’ve already got mosquito bites. I need to get out the anti malarials.